A red priest? I thought he was a musician!

Does listening to music of Vivaldi put a "Spring" in your step? Does his music warm your heart like the "Summer" sun? Fall ("Autumn") into your favorite comfy chair and treat your ears to some delightfully creative masterpieces I have selected for you! Vivaldi's music won't leave you cold as "Winter". No matter what the "Season", Antonio has it all covered! Now, about this "red priest" thing, well, you'll just have to read the page on that one! So, listen to some great music and read about this Baroque composer whose music needs no fixing! {Baroque (broke) ~ fixing ~ get it?} LOL! Yes, I know I have a unique sense of humor and should just stick to sharing my love of music. Enjoy! (Don't worry, I won't make any more puns on the page. :D)

Personality: Known to be arrogant and cocky.

Nickname: Il Prete Rosso ~ "The Red Priest" because of his red hair.

Most Famous Compositions: The Four Seasons

Which is your favorite musical season?

The 99 Most Essential Vivaldi Masterpieces! - by Various Artists 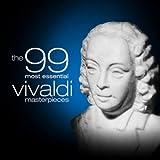 The 99 Most Essential Vivaldi Masterpieces
This amazing MP3 collection of Antonio Vivaldi's music contains 99 pieces of music from The Four Seasons through Concertos for almost every baroque period instrument!
Buy Now

Vivaldi & the Four Seasons from Canada's National Arts Center ~ This free 34 page document is written for teachers and parents and contains lesson suggestions for multi-curicular subjects. It looks really awesome!

Vivaldi Matchbook to use for a lapbook or mini-book. (Scroll down.)

Gabriella's Song - about a young lady who finds music in Venice, Italy, the city of Vivaldi's birth. 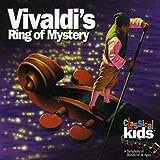 Vivaldi's Ring of Mystery (Audio CD)
This recording from Classical Kids is part of a fantastic series for children to learn about classical music composers! Students, parents, and teachers will enjoy how a part of Mr. Vivaldi's life is told in a fun story with voice actors. His music is interspersed throughout the recording and at the end of the recording to enjoy. The series has other wonderful books about Mozart, Beethoven and others along with teaching suggestion books for educators.
Buy Now

A Musical Journey to Europe with Vivaldi

Vivaldi - The Four Seasons - A Naxos Musical Journey [DVD]
Enjoy viewing almost an hour's worth of beautiful sights throughout Europe while listening to the seasonal music of Mr. Vivaldi!
Buy Now

Vivaldi composed tons of beautiful music for us to still enjoy today! A few of the pieces that I would recommend for you to hear are: Concerto for Mandolin in C Major RV425; Summer, Autumn, Winter, and Spring from the Four Seasons; Concerto for Oboe and Violin; Bassoon Concerto in A Minor RV497; Concerto "Grosso Mogul" RV208 - Mov. 2-3/3; Concerto in B Minor RV 386 Mov. 1/3; Sonata a Quattro in E Flat Major RV130; Orquesta Barroca de Sevilla; and Sonata da Camera in B Flat Major RV78.

Some of the above pieces are listed as videos below for your enjoyment. Your ears are in for a treat!

How well do you know your music history about Vivaldi?

How'd you do on the quiz?

Vivaldi in the 21st Century - Modern versions of Vivaldi!