Aquabats and A Swimming Good Time

The Aquabats band is celebrating the release of Hi Five Soup and the family gathered together Friday, February 11, 2011 to see the Aquabats on stage in Hollywood.

The bottom floor is void of seating and the fans can press the stage and surf the crowd. Six very big guys catch them, mostly cradle style, at the foot of the stage and set them down. The surfers then return to the pit which sways or moves on mass according to the mood of the fans. The Aquabat crowd pretty much milled to and fro, the arms raising only to move the surfer with a fluid motion, like the legs of a caterpillar upside down on its back.

I had a good time seeing the band for the first time, safely in a theater seat at the back row of the balcony.

Out on DVD. Emmy nominated Children's show. The Pink Panther has nothing on these guys. A team that rocks for parents and kids.

The Aquabats jumped off this year with a tour for their new CD, Hi 5-Soup! Ricky Fitness notified his family of the LA show and we made plans to see him at the drums with the Aquabats. Some of Ricky's cousins, his brother, aunts, uncles, and friends on the roof of the theater.

Some of us visited, some chilled, some took in the Voodoo Glow Skulls the punk ska band from Riverside, CA., the act before Aquabats. Ricky is from Riverside and originally was the drummer in Assorted Jelly Beans, a punk band that had success and traveled to many countries playing their music.

The drums are a natural extension of Ricky Fitness' arms. I remember a drum set for him in his parent's home when he was 6 years old.

Another strange tidbit about RF. If you are a fan of the Fast and Furious movies Ricky's first set of drums sat near the small side porch that is shown in the yard parties in the F&F movies. His uncles, Eddie and John built the porch and his Grandfather owned the house for many years.

This is what reviewer Dru Bruce from Pittsburgh said on amazon. "The drums are the best drums I have ever heard on a The Aquabats! album. The rhythms are so weird but poppy. It's fantastic. The drum production is amazing."

The lyrics, as in all their songs, are suitable for school age young people. So go ahead kids rock and roll. 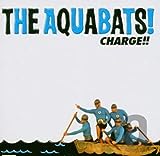 Look for all the Aquabats hits like Pool Party, Fashion Zombies, Magic Chicken and More.

Up On the Roof at the Music Box Theater

Have you been to Hollywood Blvd? Here is a shot from the roof of the old theater the band has played at a few times.

It is the only building left standing on a block that is going to be redeveloped. This decades old building was saved and will be standing among the new. Whenever that should happen.

Stage graphics during the show.

Latest youtube by Aquabats! for Hi-Five Soup! - Take note of the drums!

Link up to info on the Internet about the Aquabats! Stay in the swim; read all about it. The band has won an official Emmy Award for their Aquabats! Super Show. It is no wonder that Ricky Fitness is the most handsome character on the show.

Loves the drums, stays fit, he knows pleasantries, and I hear he likes to cook; big time like a Thanksgiving Day spread.

What the traveling band does to stay busy? He got an Hi! Five.

The Aquabats on Yo Gabba Gabba

At the end of show the Aquabats did Pool Party and two young people were allowed to crowd surf, with rules and careful instructions to the crowd, otherwise you have to be an adult. It was a fun evening.