The unconventional family in the movie Ballet Shoes starts out as one lonely old, world-travelling bachelor living alone in London in the 1930s.

First to arrive on Great Uncle Matthew's doorstep, are his young niece, newly orphaned, and her Nanna. He reluctantly takes them in but continues his world travelling and his fossil collecting. However, he returns home on three occasions with three rather unusual fossils in the form of baby girls whom he has adopted on his travels.

In the 1930s travel was quite different from travel today and a journey abroad could take a very long time. After adding those three babies to his household, he disappears on his next voyage for an extended period of time leaving behind enough money for his eldest niece and her Nanna to cope with the running of the household. However, when the money begins to run out, the family resorts to taking in boarders.The girls are enrolled in The Academy of Dance and Stage Training on a charity basis so that they will be learn some skills and be able to fend for themselves eventually. The school is not a perfect match for all of them as one longs to become a famous ballerina, one an actor and one an aviator.Ballet Shoes is a wonderful family film from the BBC filmed in Northern Ireland in 2007.

Ballet Shoes is based on the book of the same name by Noel Streatfeild. The movie features Emma Watson (of Harry Potter fame), Lucy Boynton and Yasmin Paige as the three young girls adopted into the family who go on to become fast friends. It also features Emilia Fox, Victoria Wood, Richard Griffiths and Eileen Atkins.

Click here to order your copy of Ballet Shoes from Amazon.

Storyline of Ballet Shoes From Amazon

"A heartwarming film about family, fame and realizing your dreams."

"The Fossils are an unconventional British family living in 1930's London. Orphans Pauline, Petrova and Posy are being raised by an elder sister Sylvia and her Nana in the absence of their eccentric great uncle Matthew . As Sylvia struggles to educate and support her three charges on very limited funds, she is forced to let rooms and enroll the girls in the Academy of Dance and Stage Training in hopes of furthering their education and preparing them to earn a comfortable living. While at the academy, each of the three ambitious girls discovers her own personal calling and labors intensively to achieve her dreams: Pauline studies to become a star on the stage, Petrova gravitates toward a career in aviation, and Posy trains to become a great classical ballerina. Their paths are difficult and full of adversity, but the sisters' steadfast support of one another and common resolve to earn a place in the history books based on their own merits propels each of them toward individual success. A compelling and inspirational film that encourages young women to strive for their dreams, Ballet Shoes is most appealing to ages 9 and older." --Tami Horiuchi

My Review of Ballet Shoes In 100 Words or Less

Ballet Shoes is a good family movie, particularly for families with girls. As one Amazon customer reviewer will say in a minute, her son was not into this movie. Neither of my teenage boys watched this with me, they were not available but I do not think they would have sat down to watch a movie called 'Ballet Shoes.' They might have watched it with me when they were younger although it would not have been their first choice.You do not have to be interested in ballet to enjoy this film. The storyline is good and the time period and the setting of 1930s London interesting and well done. My boys would have loved to live in that mansion!I feel comfortable comparing it to films like Anne of Green Gables, The Road To Avonlea and The Wind At My Back. If you and your family enjoy programs like those, you will certainly enjoy Ballet Shoes.

"An embraceable film of the sort that emerges more frequently from elsewhere nowadays than Hollywood."~~ The Oneida Daily Dispatch

On a personal note, I watched this film with my 8 year old daughter and 6 year old son. While my son fought to pay attention (not surprising), my daughter was riveted throughout the film. The appearance of `Hermoine' as a teen brought her into focus early on, and then the tale itself kept her eyes and ears wide open. She's asked repeatedly to watch Ballet Shoes again, which of course she has. My son, of course, is back to watching `his thing', Spiderman, Superman and The Adventures of the Galaxy Rangers..." ~~ Compusurge

"I think the cast did a wonderful job as the characters,and Emma Watson shined as Pauline,and this is a very faithful wonderful adaptation of Ballet Shoes,and i recommend it to everyone,and i hope if you guys enjoy the movie that you will go read the book." ~~ Elliott

"A brilliant, fun and uplifting story, intelligent script, with terrific acting all round, gorgeous camera work, lovely sets costumes and music... what more could anyone ask for!" Jeremy Manson

"Oh my gosh, could this movie be any cuter? I don't mean that in a sickeningly sweet way. This movie is just a good story about women trying to make it on their own after the war in London. The Fossil sisters were all foundlings of a collector of all things paleontology. They grew up in a big old grand London house alongside trilobites and T Rex until those treasures had to go to make room for the growing girls." Cedric's Mom

"The story is absolutely enchanting and entertaining, and I will defiantly be watching to see what these three young women will do next. Great acting, great story, set in the interesting time of the 1930's, even if you don't have any young children, you can still enjoy this delightful film!" ~~ Alyse Marie 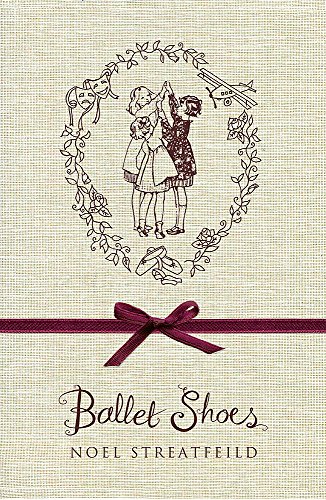 "We three Fossils vow to put our name in the history book, because it is ours, and ours alone."

Does Ballet Shoes sound like a movie YOU would enjoy?