Ringo Starr once said, "We thought that if we lasted for two to three years that would be fantastic." Well, guess what. The Beatles are still around and they are still selling music.

The Beatles Mono Box Set, which is rumoured to have been a limited edition of 10,000 copies, is amazing proof that The Beatles have lasted a lot longer than anyone could have predicted and if you want to listen to the Beatles the way it was originally recorded, the mono set is the way to go.

If you are a Beatles fan, you probably already know all about The Beatles Mono Box Set which features the Beatles remastered. There was so much buzz surrounding this release, that it sold out seemingly instantaneously. Unfortunately, if you did not act right away, you were left without a set.

Click here to order your copy of The Beatles Mono Box Set from Amazon.

"The true Beatlemaniac, of course, will get both boxes (well, I did, anyway). After listening to all of both boxes, I think I will listen to the mono CDs more often than the stereo discs." ~~ Craig Dickson

"I don't know what else to say but if you are a hardcore Beatles fan, you need this. The demand for this box set has been out of control, surpassing EMI's expectations. To all my fellow Beatle Brethren, I hope you get the opportunity to hear this set for yourself. Mind blowing. ~~ M. McKay

"I'm going to just get to the point. Think of buying this set as the "directors cut" of your absolute favorite movie, as this is what the Beatles wanted their songs to be heard. You will hear versions of songs on here that sound so much better than their 1987 CD mono and stereo counterparts. Lucy In The Sky With Diamonds and While My Guitar Gently Weeps are my two favorite mono mixes at the moment. I give the music and contents a 5 due to the fact that these mono recordings sound like your listening to the original album without the old vinyl cracks and pops, as well as the inclusion of the original 1965 stereo (remastered) versions of Help and Rubber Soul.

Remastering and issuing these mono recordings was a great idea. The packaging itself is simple. The CD's in this set do not have the expanded liner notes like their remastered stereo counterparts. Each CD is designed exactly the way they looked on vinyl, with Magical Mystery Tour being the only Capitol record label. Also, each cover has it's own proteted wrap. I would definetly give the packaging a 5 due to it's glossy hardcover box, mini replica vinyl cd's, album sleeves, and the protective sleeve for each CD.

All I can say is listen to the mixes the Beatles wanted their fans to hear. The only way to do that is to either buy the mono vinyls or this limited edition boxset. Which by the way, probably wont be available until the end of September." ~~ Sanch Ranch

"So are they worth the money? Well there in lies the question only you as a consumer can answer. I spent 2 days listening to these albums that I have listened to thousands of times over the years and had 2 of the best days I have ever spent as a music fan. One thing I will say is that the Mono mixes are best heard the good old fashioned way with 2 speakers and an amp, crank it up and fill your room with sound. You just do not get the same experience from headphones." ~~ Marc B.

The Beatles Mono Box Set includes the first ten albums that have been re-mastered in mono. (It does not include Yellow Submarine, Abbey Road and Let It Be because they were originally recorded in stereo.) It also includes a double album called Mono Masters which includes singles and EPs.

The set arrives boxed in a limited edition, hard white glossy box and features CDs packaged to look like the LPs. They were remastered by Paul Hicks and Sean Magee with Guy Massey and Steve Rooke.

"One thing is for certain, they (the mono boxed set) will cost you a hell of a lot less than it will to collect these on vinyl and as it has often been quoted, "You haven't heard Sgt Pepper till you have heard it in Mono." Never a truer word said. ~~ Marc B.

Buy Your Beatles Mono Set on CD From Amazon 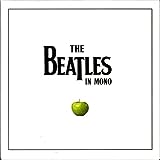 The Beatles in Mono (The Complete Mono Recordings)
Buy Now

The Beatles Mono on Records

Buy Your Beatles Mono Set on Vinyl From Amazon

Have you had a chance to hear any of the Beatles mono remastered music?