Book vs. Movie: Memoirs of a Geisha

How Good the Adaptation?

Water: an element that can cut gorges through stone and build stalactites and stalagmites of incredible size, given time; an element that will change its course when necessary yet never wavers from reaching the sea or the lake that is its ultimate goal.

Sayuri is a child of water. Born in a village near the sea, her eyes are the blue-grey of a mountain lake, her spirit is the essence of water: persistent yet flexible.

Arthur Golden's debut novel is brimming with water as it navigates through the beautiful yet harsh realities of Japanese culture to bring us a story of one young woman's journey to fulfill her dreams.

On the other hand, although visually stunning and graceful, director Rob Marshall's movie Memoirs of a Geisha could use a little more water.

It is only my opinion

How is it that I judge myself worthy of judging the work of others?

I don't. This is an opinion piece and that's all. I am not an expert on books or an expert on movies. I know what I like and I like to talk about it. Still, it's just an opinion.

I don't care if the screenwriter got the dialogue of the book perfectly or if the movie ending is given a different twist. It doesn't matter that I visualized a different actor in the role. I simply want the movie makers to make me believe that their film represents all that is good from the book. If they did that, I'm happy.

All that was good in the book

Ah, where to start? To read Golden's beautiful Memoirs of a Geisha is like stepping into a picture book and living haiku poems. With a deft pen, speaking in the first person, Golden brings alive Sayuri, a child who wishes above all else to be a geisha and win the heart of one particular man. 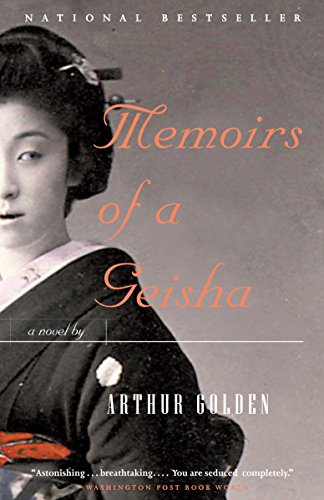 Memoirs of a Geisha: A Novel
Young Sayuri endures the harsh realities of servitude, the strict training of a geisha, and the tricky maneuvering through her given social and political world with quiet determination. We feel her pain and joys, triumphs and disappointments in every word. Sayuri adapts to life with the dexterity of the element of water that is so much a part of her spirit. And, like that water, Sayuri's course varies, but her destination does not change.
Buy Now

All that was good in the movie

This movie is beautiful. The scenery is breathtaking, the story follows the book well, the dialogue is effective and each scene is imbued with appropriate drama and tension. For some reason, however, the persistent determination of the character Sayuri is lost in the beauty of the craft -- Rob Marshall's Sayuri is less a product of her own making and more a creature molded entirely from the desires of others, intended to satisfy the desires of others. Although much of that may be true of the life of a geisha, Sayuri's patient trek to build a life on her terms (however limited her options may be by the culture in which she lives) was evident in the book, but lacking in the movie.

Not that I don't recommend this film -- quite the contrary. Memoirs of a Geisha is a stunning and engaging movie. It simply is not all it could be, given the potential of the book.

Memoirs Of A Geisha
I was particularly impressed with Li Gong as Sayuri's rival Hatsumomo - she effectively conveys the struggle of someone forced to behave in a manner contrary to her own hopes and desires. Still, it was a disappointment to have the three main Japanese women in the piece played by Chinese actresses. They are all brilliant, but surely Mr. Marshall could have found three beautiful and talented Japanese actresses to play these wondrous ladies.
Buy Now

The Art of Patience

What was your opinion?

Leave your mark on this lens...