Book vs Movie: Something Wicked This Way Comes

By the pricking of my thumbs

Something wicked this way comes.

Ray Bradbury knew how to pick a title. And set the stage for a frightful ride. Something very wicked is coming to town.

Something Wicked This Way Comes was first published in 1962. The movie adaptation was released in 1983. How good the adaptation? Ah, there's the rub.

It is late autumn, just shy of Halloween, in a small mid-western town in Illinois. Best friends (and neighbors) Jim Nightshade and Will Halloway learn that a carnival is coming to town. Intrigued (because carnivals are seldom seen after Labor Day in that part of the country), the boys track the mysterious doings of Cooger and Dark's Pandemonium Shadow Show with its promise of beautiful women, bizarre acts, and awe-inspiring rides.

At the vanguard of a storm, the carnival arrives. Just before 3 A.M., riding high on a flat-bed car of an ancient black train, a giant calliope sings an odd assortment of notes of its own accord (for no one is at the keyboard). With its cargo of acts and exhibits, the train pauses in a field outside of town. In spine-tingling silence, workers disgorge from its bowels to erect tents from black clouds and set up the rides and exhibits of the strange carnival. In hiding, Jim and Will are there to witness the eerie assemblage.

And it is only the beginning of the nightmare.

All that is good in the book

Have you ever read a passage that sent chills down your spine? Have you found yourself glancing over your shoulder at an imagined sound or pulling the blankets to cover more of your body while immersed in the pages of a novel you cannot put down? Well, that is what the tumbling prose of Ray Bradbury can do. That is what you will find in the leaves of Something Wicked This Way Comes.

This is no ghost story, however. Some of the darkest themes plaguing mankind are touched upon with chilling accuracy: How much of your soul is for sale? Do shadow thoughts invite shadowy deeds or gloomy repercussions? 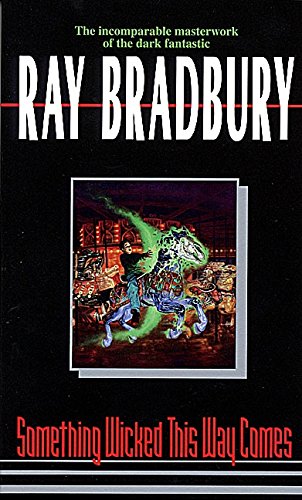 Something Wicked This Way Comes
Most good authors can describe a scene with accuracy. What Bradbury does as well is to conjure the feeling, the ambiance, the atmosphere of the scene. The reader is chilled by the wind, made claustrophobic by the hiding places, overwhelmed by the evil that is menacing the narrator. You don't so much as read Something Wicked This Way Comes as experience it. This is one terrific (and scary) book.
Buy Now

All that is good in the movie

I admit that it has been years since I watched Something Wicked This Way Comes, the 1983 Disney adaptation of Ray Bradbury's novel. However, I can sum up all that is good in this movie in two words: Jonathan Pryce.

As Mr. Dark, Pryce is magnificent. The scene where he offers Will Halloway's father (played rather woodenly by Jason Robards) a chance to fulfill his dream of being young enough to enjoy his son, is mesmerizing and chilling. That scene alone makes the movie worth seeing (or do I mean "worth the Pryce"?)!

Something Wicked This Way Comes
The general atmosphere for the movie is far lighter than the book. Perhaps that was a deliberate choice on Disney's part to appeal to its younger audiences. Whatever their intent, I felt the theater-goer got Wicked lite instead of the full impact of this dark tale. Instead of dealing with the gut-wrenching issue of soul, a "Monkey's Paw" twist was added whenever a character made the choice to go to the dark side: a woman is made beautiful again, as is her wish, but is shortly thereafter struck blind so that she cannot enjoy her beauty; a double-amputee gets his limbs restored, but can do so only by becoming a boy again. The torment and subsequent insanity that is so graphically conveyed in the book is Disney-fied into pity. Even Mr. Dark has lost his "illustrations:" the twisted and tortured tattoos that cover his body in the book. Charles Halloway, Will's father, is described in the book as having a voice the same color as his hair (gray/white). Except for the library scene, Robards' Charles Halloway is dirt brown instead of the rightful hero of the tale. But, despite the repetition, see it because of Pryce.
Buy Now

A Visit to the Dark Side

The first video is the movie trailer announcing Something Wicked This Way Comes. The second, however... Ah, the second video is the full library scene that so fascinated me those many years ago and introduced me to the great Jonathan Pryce as Mr. Dark.

What do YOU think?

What do YOU think?

By the pricking of my thumb, tell me why you may have come