Bright Star is a period drama and romance based on three years in the life of the poet, John Keats. The movie is about the last years in his life during which he was romantically interested in Fanny Brawne. It is based on a biography of John Keats written by Andrew Motion and on letters that were written by Keats himself.

The picture was written and directed by Jane Campion and is considered exceptional in several areas including the wonderful performances put in by the actors Abbie Cornish, Ben Whishaw and Paul Schneider and the way it presented 'real' life of the time period.

It is a quiet picture which will slowly draw you in until you really do care about the characters and appreciate the beauty of the setting. If you like period films or John Keats' poetry, you will love Bright Star. I think it is worth noting that you do not have to like poetry to appreciate this film.

On this page you will find more information about this movie and the movie trailer as well as expert reviews and reviews from other ordinary viewers like you and I. You will also find a couple of companion gift ideas. I think that Bright Star is a perfect candidate for an 'a movie and a book' gift set.

Click here to order your copy of Bright Starfrom Amazon.

"Based on the true story

of a brilliant poet

who was his shining light."

My Bright Star Review in 100 Words or Less

Based on a true story about the famous poet, John Keats, this movie is a beautiful, romantic love story set in England in the 1800s. In it you will meet John Keats, a young man and a struggling poet, who is barely able to make ends meet. You will also meet Fanny Brawne, a down-to-earth and practical young woman who is able to create amazing fashions with her fingers and who knows how valuable this talent is in terms of life skills. You might not think they would be a perfect romantic match but once Keats starts teaching Fanny about poetry, her outlook on life undergoes a remarkable change. Their love story is not straightforward though and I will refrain from telling you any more of the story than that. I will close by saying that the setting really is magnificent and that the actors all turned in brilliant performances. Almost everything about Bright Star is beautiful...

Order Your Copy of Bright Star From Amazon

It’s one more movie that offers a peek into the life of a famous writer. John Keats, in this case who left our world at the young age of 25 thinking that he had been unsuccessful.

Bright Star tells the story of his last years and his love for Fanny Brawne, who is played by Abbie Cornish. Fanny is a neighbor, a strong-minded woman and also an artistic spirit.

Throw in the man Keats is living with, Charles Armitage Brown, who is played by Paul Schneider who has high regards for Keats as well as an interest in Fanny. All three actors do a fine job.

The movie also does an excellent job of giving you the feeling of what it might have been like to live in that time frame.

Amazon customer William Lukeman was impressed by this movie. By its quite power that manages to be at the same time tender…

Betty DarkHorse says that the film made her feel tender and pure inside or like she had arrived "at that trembling delicate and snail-horn perception of beauty.”

Jessie E. McCarthy says that the visuals are stunning and the dialogue both witty and intelligent calling it one of the most beautiful films she has ever seen.

A short but moving soundtrack this one is 23 minutes long and only reminds one of the short and tragic life of John Keats It is beautifully composed and is a beautiful score interwoven with dialogue from the movie including the reading of two poems, La Belle Dame Sans Merci and Ode to a Nightingale.It will take the listener back to the beauty of the movie, the beauty of the love story and the beauty of the setting. It would be a wonderful companion gift item for anyone who loves John Keats and/or period pieces. 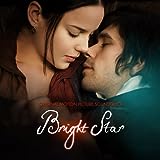 The book 'Keats' by Andrew Motion is one of the books that Jane Campion used as the basis for the story Bright Star. In the book, Motion tells of the life of John Keats, which spanned 1795-1821, with obseration and clarity. Keats was an orphan and trained to become a doctor bug eventually became a poet, dying at the age of 25. He wrote some of what is considered the most moving poetry and letters ever written because of his love for Fanny. It is considered a scholarly look at Keats' life and would be of interest to someone who is quite interested in the poet.Not perhaps for the casual reader, this biography tells of Keats life and how "Keats's work reflected his experiences not just as a private individual, but socially and politically as well."

Bright Star: Love Letters and Poems of John Keats to Fanny Brawne
The book 'Bright Star' is the gathering of poems and correspondence that were written when Keats' was in love with Fanny.The letters were actually written by Keats but assembled here by Jane Campion who used them as the basis for the Bright Star movie."The love letters are delightful, touching, painful and the poems are amongst the greatest of the Romantic era." ~~ S.B. Moore
Buy Now

Had you heard of Bright Star before you read this page?

Bright Star must not have had a lot of media attention, because I had not heard of it until I picked it up the other day to watch it. How about you? Had you heard of this movie before you came to this page?

Had you heard of Bright Star before you read this page?

"He was a dreamer.