One of the highlights of my childhood was sitting down in front of the TV on a Saturday afternoon and tuning in to The A-Team. There was nothing better than watching Hannibal, Murdock, Face and B.A. as they helped the oppressed while simultaneously on the run from the military police.

The basic plot of the show is as follows; wanted by the government for a crime they didn't commit, the A-Team travelled around the U.S. (and occasionally abroad) helping out people who were generally being terrorised by some local gangster/hoodlum. The episodes were fairly formulaic, but I never cared; it was that much fun.

My favourite part was when the A-Team would get captured and locked up in some large store room containing junk and welding equipment. An arrangement of the theme-tune would then start and the team would construct something to help them escape. This would often be some kind of armoured vehicle, but I have also seen them construct a micro-glider and a large gun that fired cabbages!

Every episode also contained a car chase of some sort which would always end with the bad guys' car flipping through the air and the passengers crawling out unharmed seconds later.

My favourite character was always Murdock, the insane pilot. I loved the silly characters he would put on each episode and as I've grown older, I've come to appreciate his humorous t-shirts too. In most episodes, Murdock was broken out of the mental hospital he lived in by Face, the team's conman.

And who could forget B.A. Baracus? The team's mechanic and hard man, B.A. was famous for his catchphrases such as 'Shut up fool!' and 'Sucka!'. Despite the tough exterior, B.A. was terrified of flying and regularly had to have his milk spiked to get him onto a plane, especially if Murdock was flying.

The A-Team was a fantastic show and for me, was the ultimate Saturday teatime program. The story lines are great fun, the cast are perfect and the instantly recognisable theme tune is one of the best. I can't recommend this show enough.

Who is your favourite member of the A-Team?

Bring back some of those A-Team memories with these videos.

The Updated Intro from the A-Team Movie

Dedicated to my Favourite Member of the A-Team; Murdock

The A-Team DVDs on Amazon

Want more A-Team items? Check out the DVDs below. 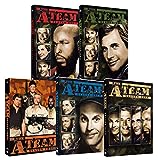 The A-Team: The Complete Series
All five seasons of The A-Team in one box set.
Buy Now