Looking to get someone some classic slapstick comedies as gifts but do not know where to start? There are way too many bootleg or inferior quality DVDs out there when it comes to the nostalgia market that you would not want to hand anyone as a gift. Here are some of the better and affordable DVD releases.

I am a huge Laurel and Hardy fan. Unfortunately thanks to Hallmark who currently owns the rights to release the Hal Roach movies on home video and insists on using unrestored VHS masters made for home video in the 80's finding a good set of Laurel and Hardy films as gifts is near impossible. Over in Europe there is a box set of the entire Hal Roach catalog fully restored, but is expensive to import and incompatible with American DVD players. A few years ago in the United States you could buy a nine volume set of Laurel and Hardy's silent movies fully restored. But now that Hallmark owns the rights that set is out of print and a volumes go for as much as $200. Fortunately there are a few movies that Hallmark does not own the rights to. Back in the 50's MGM wound up owning the rights to a handful of Hal Roach movies and has released most of them in "TMC Archives - The Laurel an Hardy Collection." Disc one contains two full length features "The Devil's Brother" and "Bonnie Scotland" complete with commentary from film historians Leonard Maltin and Richard W Bann. The second disk contains the complete scenes from movies that Laurel and Hardy mad guest appearances in including "Hollywood Review of 1929", their two scenes in "Hollywood Party", their three scenes from "Pick a Star" and the only known existing Laurel and Hardy footage from their lost color movie "The Rouge Song".

After Laurel and Hardy left Hal Roach studios they signed with 20th Century Fox where they made six movies. Although Laurel and Hardy fans usually have nothing good to say about the Fox films, and yes they were nowhere as good as most of the Roach movies, they are still funny.

Hallmark apparently does not own the rights to "March of the Wooden Soldiers". Several companies have released this movie to home video, but the best quality print comes from MGM who still own the first generation masters to the original theatrical release

The only other Laurel and Hardy DVD I could recommend as a gift would be their appearance on the show "This Is Your Life". I hope next year I can recommend their other movies, but as of right now unless you have the money for expensive out of print or foreign DVDs, or are willing to give a poor quality and most likely bootleg Laurel and Hardy movie as a gift, then this is the best available

While there is not much to recommend as to Laurel and Hardy movies there is better news about their rivals Abbott and Costello. Universal has released "Abbott and Costello: the Complete Universal Pictures Collection". These are all but one of the movies that were syndicated to television in the 70's. ( Universal also paid for the rights to syndicate "Dance For Me Henry" to television, a movie originally made for United Artists. That movie is currently released by MGM ). The set includes "It Ain't Hay", a movie that has never been released on video due to the owners of the book it was based on suing Universal which was not settled until last year. The 15 disc set is nicely packaged in a trunk with a 44 page book. 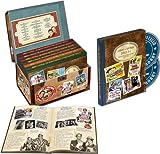 While Chaplin's later self produced movies are all available on DVD they can be a bit pricey. A more affordable box set is the restored Mutual films which includes recently rediscovered footage.

Another good set is the DVD release of the three part documentary "Unknown Chaplin" which was made by film historian David Brownlow and David Gill in the 80's. Back then they were working on the epic 13 part series "Hollywood: A Celebration of the American Silent Film" and were asking various archives for any existing pristine prints of silent movies they could use for the documentary. They hit pay dirt when they asked Oona O'Neill Chaplin, wife of the late Charlie Chaplin and then caretaker of the Chaplin estate, if they could borrow footage from their archive. It turned out that not only did Chaplin keep the master negatives of all his post Mutual movies but had also held on to most of his outtakes and deleted scenes. They had planed to feature Chaplin in the episode "Comedy - A Serious Business" along with Keaton, Harold Lloyd and Harry Langdon and had only allocated 15 minutes to each artist. In addition another film collector Raymond Rohauer found several outtakes from Chaplin's mutual movies. Now suddenly with a treasure trove of behind the scenes footage including home movies and previously unreleased films they had not only enough for an entire chapter on Chaplin alone, but enough footage for three chapters. Sticking to the original plan and giving Chaplin his 15 minutes which went over his released movies they decided to make a spin-off documentary based on the found footage. "The Unknown Chaplin"

If you want to spend a lot of money on a gift then you can get someone all of Buster Keaton's independent silent starring features in one box set "The Art of Buster Keaton". These are the films he made after leaving Roscoe "Fatty" Arbuckle and before joining MGM Studios.

But if you want some more reasonable priced sets, there is the ultimate edition of "The General". This is so far the best known print of the classic silent film, and with your choice of three musical scores including the superior Carl Davis.

Keaton's first three films for MGM are part of the "TMC Buster Keaton Collection" This includes a genuine classic "The Cameraman" which was the last movie that Keaton would have creative control over, the underrated "Spite Marriage", and Keaton's first sound movie "Free and Easy" along with a documentary by Kevin Brownlow about Keaton's days at MGM. It would have been nice for TMC to include Keaton's scene from "Hollywood Review of 1929" as a bonus as they had done on their Laurel and Hardy collection. ( BTW, "Free and Easy" was remade a few years later as "Pick a Star" which guest starred Laurel and Hardy and is also included on their TMC collection. Also missing is the other six sound movies he starred in at MGM ( Perhaps TMC is saving those for future volumes? ). Sure they are nowhere the masterpieces that his silent movies were, but never the less Keaton was still a great comedian and was still able to make the MGM movies funny.

While most Keaton fans have ignored his sound movies or passed them off ass disasters, at the time they were released they were still popular. After leaving MGM, and a brief stint at Educational Pictures, Keaton made ten short movies for Columbia Pictures in the late 30's. While they come nowhere to reaching the greatness of his silent movies once again Keaton was a great comedian who was able to make even the lamest gags funny. Released in the DVD package "The Buster Keaton Collection" you get all ten Columbia shorts along with a documentary on his transition from silent to sound films and a reproduction of an actual working script for one of the shorts that Buster made notes on.

Another interesting DVD set is "Industrial Strength Keaton" which has many of his later output including industrial films, television commercials, and television appearances with Buster. It also includes one of his classic silents "Sherlock Jr." and two sound films, "Parlor, Bedroom, and Bath" and "An Old Spanish Custom". A lot of tidbits here from Keaton's career that any of his fan's would find interesting.

If you never heard of Jacques Tati then it is a shame. Tati was the contemporary of the other comedians mentioned in this article, the only difference being that they made their movies in Hollywood while Tati made his movies in France. Like the other comedians he began his career on stage and later moved to film. His breakthrough movie was "Mr Hulot's Holiday" where he introduced the character of Monsieur Hulot. One of the funniest films ever made it's plot is simple; Hulot and several other people spend a weeks vacation at a resort hotel. Much like the best slapstick characters Hulot is constantly unintentionally causing trouble. Yet unlike the Hollywood slapstick comedies instead of filling the movie with romantic subplots or musical numbers to pad out the running time Tati fills the film with observational humor allowing all the other characters to have their own comedic moments.

Tati's next movie, "Mon Oncle", took five years to make. Concentrating more on plot then on gags the movie never the less has some of Tati's best sight gags. The story is about the relationship between Mr Hulot and his nephew. The boy's father does not like Hulot who he sees as a slacker, a screw up, and a bad influence on his son. Although not as funny or charming as "Mr. Hulot's Holiday" it did win the 1958 Academy Award for best forign language film.

It took Tati another nine years before he released his next movie "Play Time". A very ambitious movie it took four years to film and required the building of a city set that was larger than any other previous movie set. "Play Time" is best described as an art movie. Shot in 70mm with a cast of hundreds and no plot the movie follows a crowd through an airport, into an office building, throughout a city and into a fancy restaurant on it's opening night. Once again Tati revives his role as Mr Hulot who drops into town on a business trip and is usually lost in the crowd.

The fourth and final Hulot film, "Trafic", follows Mr Hulot as he drives a truck across country. This movie was only recently released on DVD.

Laurel and Hardy: The Magic Behind the Movies
Buy Now 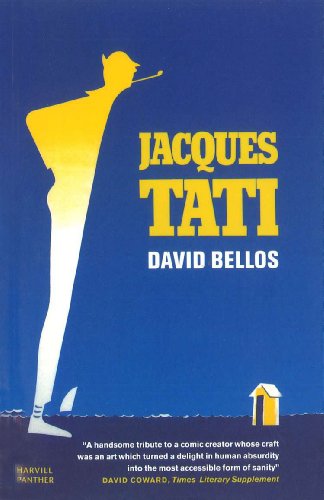