As a Cote de Pablo fan, discovering she wasn't coming back for NCIS season 11 (except for 1 episode) was a bit of a shocker. What was she going to do next? Did she have a new role lined up? Or was she turning her back on acting altogether? Maybe open a yoga studio like she once mentioned in an interview?

On the one hand I hated the thought of never seeing her on screen again, and losing my favorite NCIS character, Ziva David. On the other I respected her decision to walk away from a job that, and this is just a guess as very little details are known, no longer ticked all the boxes. I've done the same 3 years ago and that was a very hard decision to make. I can imagine it was just as hard for Cote.

As miss de Pablo is a very private person, which I admire in today's big brother society, finding an update on what she's up to professionally can be difficult. Which is why I decided to create this lens. As soon as I hear about a new project she's working on, I'll blog about it here.

2 days ago there was a press release that Cote de Pablo will be starring in a brand new mini series. The series is based on the book "The Dovekeepers" by Alice Hoffman. This historical novel was on the New York Times bestseller list.

If you haven't read it yet, it's about 4 women trying to survive the siege at Masada in the Judean desert in 70 C.E. Roman armies fought for months, trying to take over the fortress where 900 Jews were hiding.

Cote was the first to be cast and will be playing the character Shirah. It sounds like a very intriguing role. Shirah is described as a "sensual, mysterious and fiercely independent single mother with uncanny insights and a quiet and mysterious power". Her fellow refugees call her the "Witch of Moab". And though they shun her mysterious ways publicly, they do ask for her help and depend on her knowledge when they're in need.

Even though de Pablo once again plays an Israeli, the role is quite different from the Israeli Ziva David she played on NCIS. It'll be interesting to see how she tackles this role.

The four-hour mini series will be produced by Roma Downey and Mark Burnett. Previously they created "The Bible" and "Survivor". "Her talent, strength and beauty will light up the screen in the important role of Shirah," Roma Downey said.

Filming of "The Dovekeepers" starts this year and it will air on CBS in 2015.

The Dovekeepers by Alice Hoffman

The book is available in several different formats. I know a lot of readers have their preferences, so you shouldn't have any problem finding one you like. 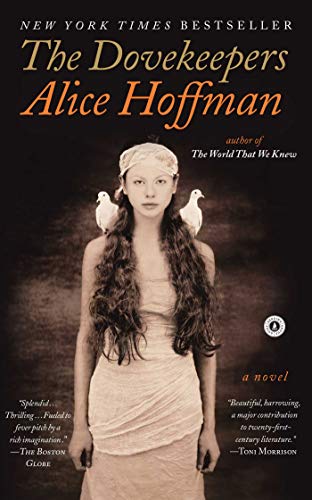 The Dovekeepers: A Novel

This is the Scribner; Reprint edition (April 3, 2012), paperback version. A Kindle version is also available (you don't need a Kindle ereader to read this format).

If you don't have a lot of time to sit down and read, the audiobook version might be right up your alley.

Listen to the book while you're stuck in traffic, waiting in line at the grocery store, knitting or walking the dog.

As the story, and the historic event it's based on, is situated in Israel, producers were originally planning on filming there on location. Apparently they've now chosen Malta instead.

Most likely, the current violence in Gaza has a lot to do with that decision. It's not clear when they start shooting, the conflict could've quieted down by then, but it's certainly understandable the film crew doesn't want to take the risk of having to find a new location last minute.

Part of me hopes they'll change their mind and decide to film in Israel after all, though. I always prefer films and TV shows to be shot on the actual location they're supposed to be taking place. Whenever possible, of course.

According to this interview, Roma Downey and Mark Burnett have received the first draft of the screenplay and are eager to get to work.

The last season featuring Ziva David (I'm not counting that one episode in season 11).

Great deal for new fans and viewers. Or for old fans who've been waiting for a good deal.

Not sure whether NCIS is your cup of tea? Watch the first episode here.

One of my favorite NCIS episodes. Michael Weatherly, and Cote de Pablo, were at the top of their game here.

Do You Want Cote de Pablo To Return To NCIS?

Assuming all parties involved can come to an agreement of course.

Would you like to see Cote take up the role of Ziva David again?

Are you excited to see what else Cote de Pablo has in store for us? Is there a particular type of movie or series you would like to see her in?

FYI: to prevent spam all comments will be moderated, so it may take a day or so for your comment to appear