to wave goodbye to high repeating monthly cable bills? Say YES! Good, there used to be an old rusty antenna living on my garage for years. I first upgraded to a new small digital antenna broadcast grabber, and now have updated to a larger antenna capable of pulling in channels from 125 miles away. After a long period of growth for cable television providers, the game has changed again. Content is now available on a multitude of platforms online, broadcast TV has updated, improved, and gone digital, creating more channels of higher quality. Products have been invented and evolved that allow us to watch shows via wireless using our internet provider. I said goodbye to cable 10 years ago after first subscribing in the early 80's. After visiting my home and seeing the options friends often ask me to come hook them up. So, settle back, hang out for a while, let's explore some choices here, but first a little poll....

How Much Money Have You Spent?

How much money have you spent on cable in your lifetime?

The answer for me is $15,000, often I dream about what else could have been done with that cash. What if I would have instead placed it into some interest bearing investment vehicle? And, to top this off, there are more costs chipping away at my retirement nest-egg. Remember what else we saw popping up all over the place in 1980, that's right, video rental stores. How much additional cash was spent in there? What about gas coming and going every week picking up then returning plastic boxes? How much time did it take to manage all those goods? Ever have an accident on the way to or from the video store? There is a far better way and it's been a long time coming.

Back in 1979 I first subscribed to cable, MTV commercials are what I remember most. The logo shaking and squirming while simultaneously changing fills and colors. It was amazing and I wondered how they did it, occasionally I'd find a movie on HBO or Showtime and then have to schedule it like a doctors appointment. All that planning, wasn't there enough of that in my work life? I thought this was supposed to be entertainment.

Today, I use a variety of methods to capture my media, and I get to watch it on my terms, when I want, where I want, as long as I want, at a fraction of the cost of cable. These include, streaming content devices like Roku, The Internet, Broadcast TV, Netflix, and the Local Library.

Overdrive is now available at many Libraries across the country, it's an excellent source of digital entertainment content, and It's free!

The Next Step: Decide on an Antenna

A Digital Antenna in my system currently brings 40 clear and color saturated channels into my home. Antennas have a wide range of receiving capabilities, I'm situated 50 miles south of a major metropolitan area, this helped me decide what device to purchase. A good rule of thumb here is to buy twice as much in capability as distance to furthest Station Transmitter or major town center. If you are right downtown in an apartment, you may not need a lot of distance capability, an indoor antenna will work fine. See some models with the easiest installation below. I'm assuming you have a television with a digital tuner, if not, you can get an inexpensive converter. 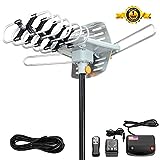 The Tip Of the Iceberg

This is just the tip of the iceberg, additional efficiency can be found by adding a rotor. This device allows you to turn the antenna 360 degrees via remote control to beam in on hard to get channels, fine tuning them.

The most exciting development in broadcast TV was it's switch a few years ago from an analog signal to digital. Traditional television creators and providers knew competition was fierce for your attention. So they have added additional channels to each frequency. This differs from traditional television in several key ways, but most exciting, they expanded your choices. Channel 4 for example, ABC, now you have 4.1 and 4.2. The PBS channel has been expanded form one channel to three, 9.1, 9.2, and 9.3 including the Create Channel. 90% of what I watch on television is PBS via 8 different stations.

My living room has a computer with dual monitors, one for regular software activities, and a larger 42" monitor for watching video content for entertainment. A DVD player is attached to the monitor also that plays discs, or streams content form the internet. The Television antenna is also attached to this viewing resource yielding millions of choices in programing.

In addition, also in my living room is a third monitor with integrated DVD player, attached to the digital antenna and a internet streaming wireless device. I'm watching a PBS program on it right now as I work on this article. I can stream content from Netflix, Hulu, Pandora, and an ever growing list of channels. The programming includes free and pay services.

This product has side inputs that will recieve RCA inputs, HDMI cable, a USB connection, and a spot for an SD Memory Card. As a gamer, I can set up my own video game arcade. As a photographer using sills and video, my living room is nothing less than connection Nirvana.

When TV is not desired, this unit can stream music into the space from Pandora and a rich growing list of stations. There's something about nice music playing softly in the background, my brain associates that with affluence, it feels like I'm in a upbeat retail space or something, maybe that's why I do so much online shopping! :-)

Start Your Shopping Now if you Wish

Review Photo's From This Lens

Traditional major networks like ABC has a full compliment of their television shows online at the websites. This is an extremely convenient way to watch only the series that attract you, watch them four and five episodes at a time without having to wait until next weeks installment. I've devoured Series designed to take 5 years of weekly watching in a week, it's a whole new way to approach this choice in media effectively reshaping your experience.

You may want to acquire a universal remote to control all your devices via one controller. Many of your smart phones can also help with with this task, so many possibilities, this lens can help. 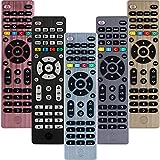 My system has 4 TV's collecting the signal from on antenna, a splitter used. Find one via this search box to maximize your system, TV's can watch different channels at the same time. 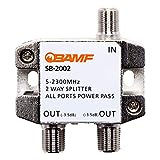 My signal has to come from several hundred feet away, the antenna is out behind the garage. You likely don't need this item depending on where yours is located, or if only using one signal. Your television may have a meter you can check to see on a percentage scale, just how strong your broadcast is. If it is less that 60%, you may have intermittent reception, or dropped signals. 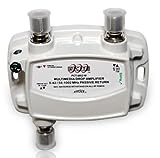 The Roku players work like nothing I have ever seen. Effortlessly they bring programs into my home with stunning reliability and convenience. I have a model Velcro-ed to the back of one TV, no more huge consoles needed to hold cumbersome equipment.

Ok, I'm about ready to sign out, this was inspired by comments from guests to my home regarding the amazing connectivity here. Home is where the heart is, why not make it a vast library for learning with rich visual and audio enhancements. Time fly's by, I am never bored, as a matter of fact, sleep becomes something I must discipline myself to do. Not sure what to make of that, but I love it.

The last two modules offer some of my own visual content as still images, video to come soon. Lifestyle, Landscape, Wildlife, and Food related images are there waiting for you. The last module is for you to mold and shape me, comment on subjects you'd like to see covered, or just the first thing off the top of your head.

Until the next Lens, and it won't be long,