Cars fans, rejoice! Disney has compiled the wonderfully entertaining Card Toons: Mater's Tall Tales into a DVD that you can your kids can watch over and over. The DVD, which was released in November 2010 (just in time for Christmas!) contains all the wonderful Tall Tales, such as El Materdor, Rescue Squad Mater and Mater the Greater . Plus, there are also two new never-before-released tales: Cars Toons Mater Private Eye and Moon Mater. And if the DVD isn't enough to keep your little one(s) happy, there's also a Tall Tales video games for Wii.

In this series of animated shorts, Mater goes on a series of wild adventures and takes on different personas in each one.

Cars Toon: Mater's Tall Tales
From Amazon: Rev up your engines for this unforgettable collection of Cars Toons starring Mater, the lovable and hilarious tow truck from the hit movie Cars. From the creative minds of Disney/Pixar come nine highly entertaining "Tall Tales" involving bullfights, drag races, rock concerts, monster truck showdowns and even UFOs - plus, check out the new, exclusive, never-before-seen Cars Toons Mater Private Eye and Moon Mater. Join Mater, the heart and soul of Radiator Springs, and all your favorite characters from the world of Cars as they take you on a fun-filled ride that will have your family roaring with laughter!
Buy Now

Enjoy the video game based on Mater's Tall Tales.

Cars Toon: Mater's Tall Tales - Nintendo Wii
Product Description - Cars Toon: Mater’s Tall Tales is inspired by Disney/Pixar’s wildly popular animated shorts of the same name. A follow up last year’s successful Wii release, Toy Story Mania!, Cars Toon: Mater’s Tall Tales is part of the Mania! video game franchise, featuring fast-paced, multiplayer, family fun. The game is a frenzied pick-up-and-play experience to be enjoyed by everyone in the room. With up to four players at once, Mania! games reward competitiveness and cooperation among players. The game will bring Mater together with Lightning McQueen and the “Cars” gang for a new set of adventures, capturing the endearing sense of humor of everyone’s favorite tow truck. Players will join Mater and his pals as they relive the wild stories he conjures up about hilariously unpredictable events that may or may not have taken place. The voice of everyone’s favorite tow truck, Mater, will be supplied by Daniel Whitney, “Larry the Cable Guy,” who also voices the character in the film and cartoon shorts.
Buy Now

Disney/Pixar's "Cars Toons" is an animated short series directed by Academy Award-winner John Lasseter, and starring Lightning McQueen's rusty but trusty friend Mater. The series premiered on the Disney Channel, Toon Disney and ABC Family in October 2008 with Rescue Squad Mater, a short video in which Mater is a fire truck that rescues Lightning McQueen from a burning building. When McQueen is rushed to the hospital, he discovers that Mater is a doctor, too. The second and third installments in the series - Mater the Greater and El Materdor - also premiered that month.

Since then, other Mater's Tall Tales have been released. In 2009, Unidentified Flying Mater was released, followed by Tokyo Mater, Monster Truck Mater and Heavy Metal Mater in 2010. Two new additions - Baseball Mater and Super Mater are scheduled to be released in 2011.

Kids will love this set that includes Mater in four different costumes from the Tall Tales DVD.

Have hours of fun with these "El Materdor" toys featuring Mater as a bullfighter.

Your kids will love hearing these stories about Mater's adventures as a daredevil, a rescue truck and a bulldozer fighter. 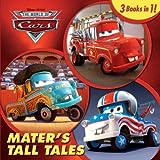 Mater's Tall Tales (Disney/Pixar Cars) (Cars toon)
Did you know that Mater was once the famous bulldozer fighter, El Materdor? Or that he was a daredevil named Mater the Greater? Or that he was a heroic rescue truck? Three of Mater's tall tales are collected in one fantastic hardcover storybook featuring Mater, Lightning McQueen, and all their friends from Cars.
Buy Now 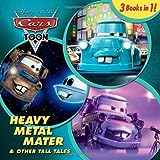 Heavy Metal Mater and Other Tall Tales (Disney/Pixar Cars)
Mater is up to his old tricks again, with three new tall tales in one fantastic hardcover storybook for boys ages 3 to 7! Mater tells Lightning McQueen how he started a heavy metal band, became a hot-rod racer in Tokyo, and had a close encounter with a UFO! This follow-up to Mater's Tall Tales is a must-have for all fans of Disney•Pixar's Cars and Cars Toons.
Buy Now

This diecast Cars vehicle features Mater in his "Mater the Greater" stunt as a high diver.

Which is your favorite Cars Toons: Mater's Tall Tales?

Which one of these Tall Tales is best?

Who saved Lightning McQueen from a burning building? Rescue Squad Mater, of course! And with this playset, now your kids can relive the scene at home.

More Rescue Squad Mater Toys - Rev up for fun with these Mater toys!

Rescue Squad Mater can come to live in your home with this fun toys kids will love.

A Cars Toon: Tokyo Mater - One of Mater's Tall Tales

If you collect CARS vehicles, don't miss this exclusive die-cast vehicle from ComicCon.