Disney's Cinderella 3: A Twist in Time

A Sequel as Good as the Original

Walt Disney's Cinderella III: A Twist in Time is the second sequel to the Disney Classic Cinderella.

Only Disney would have the audacity and know how to rewrite Cinderella's original story in a new and interesting way. Cindrella III shows what it would be like if magic fell into the wrong hands. Would Cinderella ever win the heart of the prince if someone else fit the shoe, or if the Prince doesn't remember dancing with Cinderella.

This sequel hold it's own when compared to the original Cinderella. Check out the character's bio, the music, and my review below.

Cinderella 3 Trailer - What if the magic was taken away.

Check out the promo below for Cinderella III.

Cinderella III - A Twist in Time
Cinderella III: A Twist in Time takes us back into Cinderella's world to rewrite Cinderella's original story. When Fairy God-Mother's magic wand falls into the wrong hands Cinderella's story begins again, but this time the Step-mother and her daughters have the advantage. They have the power to influence the story so that it isn't so easily wrapped up. The glass slipper fits another, and the Prince's memory becomes blurred. It is up to Cinderella and the mice to give Cinderella her happily ever after...again. This time Cinderella's biggest obstacle is not being locked in her room. This time she must embark on a quest filled with deception, intrigue, and danger. Cinderella III: A Twist in Time stirs the imagination, suggests a deeper connection between Cinderella and the Prince, and seeks to make the character's of Cinderella III more multi-faceted. We are given the opportunity to fall in love with Cinderella's again, and to draw a deeper connection between the viewer and its cast of characters. No matter which version of Cinderella you prefer you will be enthralled with the maiden who lived a life of cinders.
Buy Now

Top 10 Reasons I love Cinderella III: A Twist in Time

1.The Prince has a more fleshed out character

2. Explains why Cinderella was more inclined to help Anastasia with the baker in Cinderella III

3. We get to see Anastasia grow as a character

4. Cinderella is more proactive about making her dreams come true

6. The fight scene between Anastasia and the Fairy God Mother was hilarious

7. Funny quotes delivered by the characters

i know this might be blastfamy, considering that Cinderella is a Disney classic, but I perfer the sequal to the original.

Would you rather watch classic Cinderella or Cinderella III: A Twist in Time?

In answer to the Question Oddette aks, "Is Beauty all that matters?" Cinderella III suggests that the Prince saw more than beauty in Cinderella. We see this when Anastasia disguises herself as Cindrella. Anastasia still is unable to win the Prince's love. It is all about the Prince and Cinderella's connection and the touch of a hand.

Anastasia is one of Step-mother's children. She has red hair and is misguided . Her mother is devoted to her,but very controlling.

I love this movie because it not only recreate's Cinderella's story but Anastasia's as well. While Anastasia is still rough around the edges we discover she longs to be loved and accepted. From comments about how the Prince and King are nice to her, you can tell Anastasia isn't used to being treated with respect. Anastasia is used to being told what to do by her mother that she doesn't know her own heart. Through finding her voice we see Anastasia's potential for greatness.

Long live Cinderella III and it's Cast of Characters

Who is is the central figure in Cinderella III: A twist in Time?

Cinderella Book: A Twist in Time - Read the Story 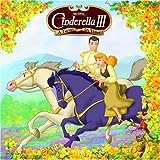 This is the first song we hear in Cinderella III. It introduces us to where the characters from Cinderella find themselves a year after the Royal Wedding. As you will see below, some had a magically pefect year while others had an pefectly awful year.

We see more of the the prince in this sequal. We see his relationship with his father. and get to see his perspective on love and his desire for it. The only disappoinment I had was that they didn't give him a name. He is refered to as either son or prince.

Cinderella 3: The Mice Sing - Clip from Cinderella III: A Twist in Time

This clip shows Jaq and Gus singing to the Prince about Cinderella and what happened at the Ball.

There are two sides to every story and ours has not been told!

A Misunderstood mother: She loves Anastasia and Drisella too much and wants them to have all the advantages in life. She dislikes Cinderella because she reminds Step-mother of the loss of her husband, Cinderella's father, and the way life could have been. In order to feel good about something she bullies Cinderella to make herself feel powerful

Evil Monster: She is selfish and wants what she wants when she wants it. She sees her children as tools to get what she wants; perhaps, a better situation in society. Cinderella is a obstical in her way or no significant importance.

Two Sides to Every Story

Is Step-mother evil or misunderstood?

Did you love Cinderella III? Have you seen it yet? Do you want to see it now?

I would love to hear your preceptions of Cinderella III: A Twist in Time. Share you favorite parts or the movie. Love or Hate it? I want to hear it all.