The Adventures of Dudley the Dragon Television Show

Who was Dudley the Dragon?

If you are like me, you know exactly who Dudley the Dragon is and you can even sing the theme song. If you have yet to learn of the Adventures of Dudley the Dragon, let me be the one to introduce you right here on this page!

Dudley the Dragon is a children's show which aired in Canada and the United States between the years of 1993 to 1997 or, and this will explain why I know the theme song so well, during the years in which my first son was between the ages of newborn and four years old. Of course, it also aired in reruns for years after that & people watched it on VHS videotape, too.

The show consisted of live actors, what they call 'full body' costumed characters and puppets with the most notable one, of course, being the giant dragon of the show's name, Dudley. The show centers around Dudley fresh out of hibernation and his two ten-year old friends named Matt and Sally. The children helped Dudley learn about life in the modern world and the show covered subjects like caring for the environment, the importance of friendship and pro-social values.

Dudley was so popular with children that he found himself in the Macy's Thanksgiving Day parade in the form of a six-storey tall float!

Unfortunately, The Adventures of Dudley the Dragon television shows are ONLY available on VHS videotape. I have had the opportunity to sell a few through my eBay store and I know they are sought after and that some episodes are more readily available than others.

If you love Dudley, I know you would like to go back in time and visit him again through the adventures of his television show. Let's hope that they will release a Dudley the Dragon DVD in the future. Meanwhile, if we want to watch Dudley we will have to be content with watching him on videotapes. 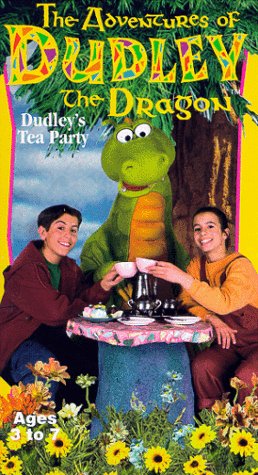 Merchandising of Dudley was somewhat controlled to reflect Dudley's environmentally friendly way of thinking with stipulations like the fact that toys, clothing etc. would be made out of natural fibres and that food would not include sugar or preservatives.

Dudley the Dragon Plush Toys Are Available Through eBay

Actor Graham Greene won a GEMINI AWARD for his role as Mr. Crabby Tree in 1994 and was nominated in 1998.

Jackie Burroughs was nomined in 1994 for a Gemini when she appeared in the episode called High Flying Dragon.

Educational consultants for Dudley tried to ensure that there was no violence or insults, no stereotyping and that girls were equal to boys. There were villains in the show. However, the villains generally were not evil but instead, misguided.

The Adventures of Dudley the Dragon Music CD

Episodes of The Adventures of Dudley the Dragon

Dudley generated quite a few episodes over a run of four seasons!

Did you know who Dudley was before you visited this page?