Romantic Italy - Distilled in a Novel

Doesn't it sound irresistible? Escaping the drudgery and gloom at home for a sunny Italian castle garden?

That's the premise of Enchanted April: four English ladies escaping drudgery, loneliness, unhappy marriages - not to mention endless English rain - when they rent a wisteria-covered Italian castle that they find in a newspaper ad.

The novel by Elizabeth von Arnim has been adapted (well several times!) as both a charming recent play and a gorgeous film.

"... Why, it would really be being unselfish to go away and be happy for a little, because we would come back so much nicer."

The Novel - Enchanting Escape to the Castle

Published in 1922, the novel has delighted readers ever since. It's gently paced (a treat these days!) and full of real-life plus a sort of wistful-glow (Don't we all wish we were in Italy?) Elizabeth von Arnim's Enchanted April tends to get re-read.

The story? Four ill-assorted women leave dispiriting and damp 1920s English lives for a holiday together in Italy.

Mrs Arbuthnot and Mrs Wilkins belong to the same ladies' club, but have never spoken until both read the same newspaper ad for a "small mediaeval Italian castle on the shores of the Mediterranean to be let furnished for the month of April." Both women have unhappy marriages and both are desperate for an escape... where better than Italy on vacation? There is reported to be wisteria at this castle. Perfect!

But they can't afford the rent unless they find other ladies to share expenses, so they reluctantly add elderly Mrs Fisher and society-beauty Lady Caroline Dester to their holiday.

At the castle the women - and assorted husbands and love-interests - learn to live and love again in the beauty of their castle garden.

A smattering of reviews of The Enchanted April (as I find them).

Okay, cuddling your laptop or tablet isn't as much fun as holding a real, paper book while lazing in a hammock in an Italian garden...

But you can read this at your desk! (Maybe passersby, looking into your cubical will think you're reviewing the Arnheim Contract.)

So here it is - the full text of The Enchanted April.

Or whatever name you want to call this author...

Born in Australia in 1866 and raised in England as Mary Annette Beauchamp, Elizabeth von Arnim was originally called Mary, but after publication of her novels gradually came to be known, even by her family, by her pen-name Elizabeth. Through her marriages she became first GrÃ¤fin (Countess) von Arnim-Schlagenthin then, later, Countess Russell. Just to keep things interesting, she also wrote under the name Alice Cholmondeley.

Like many writers, she started writing because she needed the emotional outlet - and the cash. When her first husband (whom she called the "Man of Wrath") was thrown in jail for fraud, she wrote her first semi-autobiographical novel, Elizabeth and her German Garden (1898), publishing it anonymously.

Her love life never got much simpler. After Count von Arnim died in 1910, Elizabeth married John Francis Stanley Russell, 2nd Earl Russell, elder brother of Bertrand Russell, but that marriage also went sour. Supposedly, from 1910 until 1913 she was a mistress of the novelist H.G. Wells. In 1919 Elizabeth fled her marriage and any other romantic entanglements for the United States, but she never divorced. In 1920 she began an affair with British publisher Alexander Reeves, who was almost 30 years younger. When he later married, he named his daughter Elizabeth. Elizabeth von Arnim died in Charleston, South Carolina, in 1941.

Von Arnim wrote another 20 books, all "By the author of Elizabeth and Her German Garden."

(A side note - Elizabeth von Arnim was cousin to writer Katherine Mansfield... whose picture sometimes gets switched for hers. Identity issues for sure!)

Enchanted April comes from a time when reading aloud was still a big consideration for a writer... as it has become again with books on CD. Lines spoken on-stage are only more so, of course. 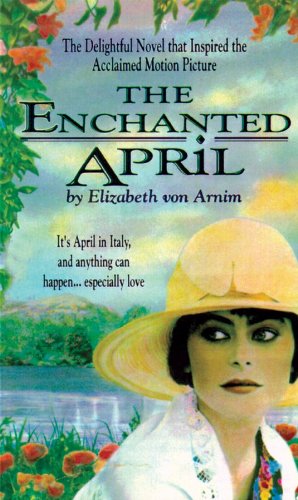 The Enchanted April (Blackstone Audio Classic Collection) (Classic Collection (Brilliance Audio))
Read out loud just for you! Try it in the car. Ignore the traffic, smell the wisteria.
Buy Now

Enchanted April was first adapted for the Broadway stage in 1925.

(The WaterTower Theatre play I designed the set for was the Dallas regional production of this 2003 adaptation.)

And in March of 2010, Enchanted April: A Lyrical New Musical, with book and lyrics written by Charles Leipart and music by Richard B. Evans, was previewed at the Chelsea Studios in New York City.

Italy (above) London (below) with real rain on-stage.

Another Stage Version... - At Liberty University

This video is all about the building of the "Villa" set for this university's production of Enchanted April. Fascinating to scenic buffs!

"Beauty made you love, and love made you beautiful."

Cupid in an Italian Garden

I love this film. Great story, great actors and performances, plus gorgeous cinematography.

A favorite movie. (And though this story - this film - sounds like a Total Chick Flick, I do actually know men who like it too... no sex is immune to the lure of Italy!)

There have been two films so far: this is the fantastic 1992 Miramax version starring a galaxy of (mostly) British talent: Josie Lawrence, Miranda Richardson, Polly Walker, Joan Plowright, Alfred Molina, Michael Kitchen, and Jim Broadbent. The newer version was shot on location at the same castle where the author stayed in the 1920s: Castello Brown in Portofino, Italy.

(Another Elizabeth von Arnim novel, Mr. Skeffington, was also made into an Academy Award-nominated film in 1944 by Warner Bros. starring Bette Davis and Claude Rains.) 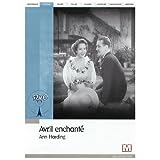 Enchanted April [Region 2]
A French version of the 1935 film... if you have the right video equipment to play it?
Buy Now

If you enjoy Enchanted April, you may like these other films, which have elements in common... sometimes it's Italy, sometimes the group-of-ladies situation, sometimes the surrendering to romance feeling.

Tea With Mussolini
A little later period, WWII, but a similar situation... English ladies in Italy, plus one brash American.
Buy Now

French Kiss
An American woman who lets France (and a Frenchman) under her guard. Meg Ryan and Kevin Kline.
Buy Now

A Room With A View
More English folk sucumbing to Italy, a film from the famous E.m. Forster novel.
Buy Now

The Wings of the Dove
Americans in Venice, a film of the Henry James novel.
Buy Now

"Sternly she tried to frown the unseemly sensation down. Burgeon, indeed. She had heard of dried staffs, pieces of mere dead wood, suddenly putting forth fresh leaves, but only in legend. She was not in legend. She knew perfectly what was due to herself. Dignity demanded that she should have nothing to do with fresh leaves at her age; and yet there it was--the feeling that presently, that at any moment now, she might crop out all green."

Other Novels by Elizabeth von Arnim 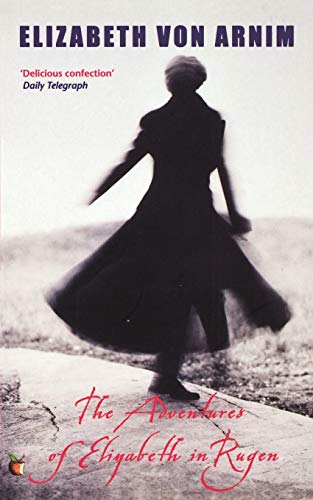 The Adventures of Elizabeth in Rugen
Buy Now

Read up on the subject! Von Arnim's life really seems ripe for a movie of its own - a BioPic staring... hmmm, who would you cast?

Isn't this what every mediteranean garden needs?

Add one to your garden or garden room. Plant a little wisteria. (Buy clippers!) And capture a little corner of Italy!

Add Italy to Your Garden

Wherever you live, you can add a touch of Enchanted April's Italy.

(Just remember to bring in the pottery before the frost sets in!)

Catch a faint scent of Italian garden with a relaxing bath. Peace, contentment, quiet... (But lock the door to keep kids, cats, and significant others out.)

Seen the movie yet? Yes? The scene with the visiting husband and the towel? Then you'll get the joke: "Pericoloso! Pericoloso!" 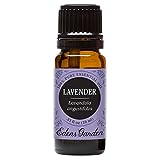 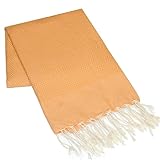 Scents and Feel 100-Percent Cotton Fouta Towel, Lilac and Mauve Stripes, 78/38
A luxurious towel is a must.
Buy Now

When staying in Chicago, I discovered this brand of herbal bath powder at the wonderful Merz Apothocary.

Merz carries fascinating products, but my favorite are these bath powders by Dresdner, which makes a range of scents. My favorites are lavender, orange-linden blossom, chamomile... All great.

You won't need the full package (I get about four baths from each.) And they turn the bathwater startlingly rich colors! (But don't stain.)