When my sister and I were young, we shared a room for a short time (though my sister might thing it was a long time). She's very organized and very good about throwing things out. I'm, well, let's just say, less than organized and terrible about reducing the quantity of "things" I have. Our room-sharing didn't last too terribly long, thank goodness! I always felt sorry for her -- I'm a terrible roommate.

So, when the Odd Couple came along, I could easily identify with both the situation of the comedy and with main character Oscar Madison. I readily admit to being messy. I suppose I'm not quite as bad as Oscar, though my sister might have another opinion.

I'm sure most people know someone who is like either Oscar or Felix, perhaps not the extreme they are. These characters are so identifiable in our lives and this concept hits home so well that, in addition to the Odd Couple TV show of the 70s (with Jack Klugman and Tony Randall) and the play and movie that spawned it, the Odd Couple TV show has given rise to a woman's version (as a play), a TV version with African American stars (Ron Glass as Felix and Demond Wilson as Oscar) and a cartoon show, the Oddball Couple. There is also a new version in the works, slated to star former Friends star Matthew Perry as Oscar.

The original Odd Couple program was iconic. The characters themselves represented prototypes -- the messy sportswriter, the fussy metrosexual photographer, the poker buddies, the girlfriends du jour, the ex-wives. Guest stars abounded, many, like Monty Hall, Howard Cosell and Richard Dawson playing themselves. Penny Marshall's recurring role as Oscar's secretary, Myrna Turner (who eventually married her boyfriend Sheldn -- no "o" -- played by Penny's them husband Rob Reiner) added a certain "N'Yawk" accent to the mix, along with her own neuroses (to contrast with Felix's neuroses). The chemistry between the characters was unmistakable and it was mostly the characters rather than intricate plots that would draw you back week in and week out.

The program had its share of memorable lines. My favorite was during an episode where Oscar saves Felix's life and Felix tries to pay him back by doing everything for him. Oscar, being driven crazy by the attention, tries to get Felix to save his life by asking for chicken for dinner and faking that he's choking on a bone. Felix says he can't be choking since the dish was created with boneless chicken. "No Bones?" Oscar says, holding the chicken so as to look it over, "how did it walk?"

Watching this program long enough and you'll find your favorite line or scene or episode or even character. Its well worth the time.

In addition to the Odd Couple, Jack Klugman also starred in Quincy, ME. I loved Quincy, too, so I included one season of Quincy here. 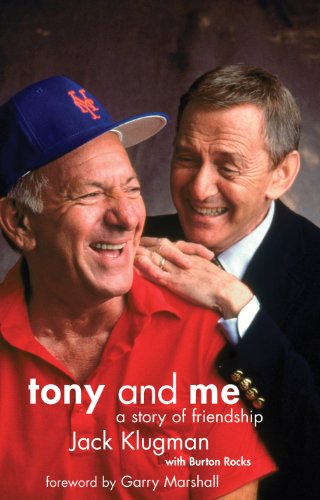 Tony and Me: A Story of Friendship
Buy Now

Who is your favorite Odd Couple character?

Do you have a favorite line? How about a favorite episode? Perhaps you remember a famous Star? Please tell us about it here: