My Family & Other Animals - available on DVD

I don't know about you but sometimes, when I discover that a favorite book has been made into a film or TV series, I'm often pretty apprehensive. But I wasn't justified in this case.

Knowing this book as well as I do, I was particularly concerned in this case as the wonderful autobiographical book, My Family & Other Animals, concerns the goings-on of a rather eccentric British family who in 1935 go to live on the Greek island of Corfu.

Could these fabulous characters be translated onto the screen?

Excellently is the answer

The family comprises a rather vague, but sweet, widowed mother and her four somewhat eccentric children. The author Gerald Durrell, who became a well-known naturalist, wrote this fabulous funny book about his own family and although I imagine that some of the story is slightly fictionalized but the characters remain the important part of the book's charm.

Oh, and the animals

Gerald was twelve years old when the family moved to Corfu and his one abiding passion - a lifelong one as it turned out - was for animals.

Throughout the book, interwoven between the antics of the family (and various other larger-than-life characters) are his stories about the animals that fascinated him on the Greek island.

He was the baby of the family and his elder brothers and sisters largely saw his and his animals as being a nuisance. (See images below).

Meet brothers Larry (in fact, the novelist Laurence Durrell), Leslie (whose main interests were guns and hunting), sister Margo (who being a teenage girl was interested in her spots, her figure and her boyfriends).

Then there were the weird and wonderful locals who had to become accustomed to these strange English folk.

A fabulous adaptation on DVD

The DVD, which was originally shown on television in the UK, allows you to spend three and a half glorious hours in the company of this eccentric family ... and the animals.

Masterpiece Theatre: My Family and Other Animals
Buy Now

See the first ten minutes in the video below

Gerald Durrell explains in the beginning of the book that it was Larry's idea for the family to move from England to Corfu.

In fact, he says that most of the bizarre activities that took place in the family were sparked off by his elder brother.

In the video below, we first meet the family. It is England in a wet and miserable August.

Gerry himself has a bad cold and is trying to clear it up by using a vapour cure. Brother Leslie has an ear infection and his ears are plugged.

Mother is snoring in her chair and Margo is experiencing a bout of acne and looking like, as Larry describes, 'a plateful of porridge'.

Larry being Larry, he insists that what the family needs is sunshine; they need to leave England and live in the sun.

Mother, not unnaturally, says that this is a preposterous idea. They have a house in England and Gerry, still a schoolboy, needs to be educated.

What a ridiculous idea. Move to Greece, indeed.

The next scene shows the family on a small boat en route to the island of Corfu... 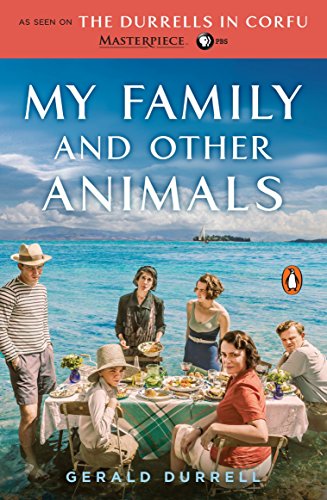 My Family and Other Animals
Although the DVD has three and a half wonderful hours, it obviously can't capture five years which is the time span of the book. So if you want to read all the adventures and mayhem, the book is available in paperback or for your Kindle. Enjoy!
Buy Now

See sample pages from My Family and Other Animals

Below you'll find screenshots of just a few pages from this excellent book. Meet: