I am a former maths teacher who loves writing about anything that pops into my head.

Hunky Dory was the first David Bowie album I ever bought and it is still my favourite of his, and possibly my favourite album of all.

The recognisable tracks for me at first were 'Changes' and 'Life on Mars', but I soon found out that there was so much more to Hunky Dory than those two songs. The album kicks off with 'Changes', pop at its best, with its 'ch-ch-ch-ch-changes' chorus and poetic verses, before melting into 'Oh You Pretty Things' with its fantastic piano accompaniment and catchy chorus. '8 Line Poem' is just that; a poem of 8 lines set to music. Then you have my favourite Bowie track of all; 'Life on Mars'. This song is perfect as far as I'm concerned. The imagery of the lyrics; the beautiful combination of piano and guitar; and the way the song progresses from its calm intro towards its dramatic chorus are all pure bliss.

This is followed by 'Kooks', a jolly song written for Bowie's son, Zowie. This song always makes me want to dance, it's great. 'Quicksand' is a slower more thoughtful song, with Bowie's trademark lyrics, before another up-beat number in 'Fill your Heart'. This then slides faultlessly into the first of two tribute songs, 'Andy Warhol', a homage to the artist with some fantastic guitar work in it. Then we have 'Song for Bob Dylan', and the slightly rockier feel of 'Queen Bitch'. The album wraps up with 'The Bewlay Brothers', a haunting song, dealing with Bowie's relationship with his half brother. In typical Bowie form, the song's emotions rise and fall, both in the lyrics and the music, and it is a fantastic end to an exquisite album.

This is an album from long before the days of CDs and i-Tunes and it shows in the way each song follows perfectly on from the last. This is an album designed to listen to from start to end in one sitting; so lock the door, take the phone off the hook, put the CD on and enjoy. I promise you won't be disappointed. 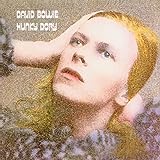 'The Bewley Brothers' from 'Hunky Dory'

How much David Bowie music do you have?