Janet Jackson Was and Still is One of My Favorite Artists

In 1989, I was nine years old and in love with Michael Jackson. So, imagine how I felt when my nine-year-old self-found out that my beloved Michael had a sister...and she could sing. Rhythm Nation 1814 was my first introduction to Miss J and I instantly fell in love with her.

My Perspective on the Album in 1989

When I heard the album for the first time, I was blown away by the lyrics and Janet's ability to make me want to get up and dance. I remember dancing in the living room with my three younger sisters and chanting, "we are the rhythm nation." The adolescent in me had no idea how conceptual or powerful the album was at the time and how influential it would be on Ms. Jackson's career in the future. In fact, at the time, all I was concerned with was where I could get the cool outfit Janet wore on the album cover, or at the very least the hat.

Today, I am a 34-year-old mom who has the entire Rhythm Nation album on my iPod. The album is as fun to listen to today as it was 25 years ago. However, I have a much different outlook on the album than I did when I was nine. For instance, the nine-year-old in me did not know there were race issues, social injustices, or poverty in the world, so I certainly didn't pick up on the concept of the album. As an adult, I respect the messages in the album, delivered through both the interludes and the lyrics and appreciate what a creative and risky album this was for its time. For me, Rhythm Nation was my introduction to a combination of R&B, rap, and swing. It was also my introduction to Janet Jackson who I have loved to listen to ever since. 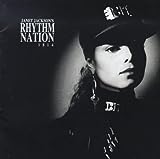 Rhythm Nation 1814
Chances are the first time you bought Rhythm Nation, it was on cassette. Replace your favorite album today on DVD and enjoy it for years to come.
Buy Now

Who is your Favorite Jackson?