Why I say Johnny Cash is a unique country star

Although I'm not a great fan of country music as such (most country singers sound like they're singing through their nose and the words are usually about beer or adultery), yet Johnny Cash stands out head and shoulders above the rest as a unique country music singer, for several reasons:

1) His unique voice (basso profound, the only country singer with a voice that low) He even sound good just talking, which is why some of his albums, including my pick for his best have talking on them

3) His unique song writingtalent andcareerand his unique choice of material both to write about to sing about from other writers. Much of his material is gospel related, which brings me to the 4th and most important point:

Johnnyt Cash was born in Kingsland, Arkansas, one of the seven children of Ray Cash ...and Carrie Cloveree. When he was three-years old, In March 1935, they moved to Dyess, Arkansas, where,at age five, he began working in cotton fields. He started singing along with his family while working. The family farm was flooded...twice, which later inspired him to write..."Five Feet High and Rising". His family's economic and personal struggles during the Great Depression inspired many of his songs.... His earliest memories were also fillled with gospel music. His mother and a friend taught him the guitar and he began play and write songs at 12 years old. That same year, 1944, he was baptized as a member of the Central Baptist Church. In High school, he sang on a local radio station. Read the rest of the Wikipedia article.

Some of Johnny Cash's songs are more like folk songs. Many have a historical basis, or relate to our great National heritage.. Some are love songs, but, none are about booze or adulterous relationships or break-ups. And much of his material is gospel related.

Check out his number one hits: 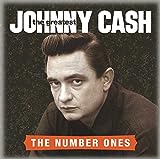 The Greatest: The Number Ones
Buy Now

The 10 best songs by Johnny Cash

I Walk The Line

Come Along And Ride This Train

Don't Take Your Guns to Town

He Turned The Water Into Wine

I Was There When It Happened And I Ought To Know

Here's the first one. If you haven't heard him, take a listen:

Check out these links for more on Jonnny Cash

But, if you can get only one Johnny Cash album-- 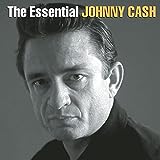 The Essential Johnny Cash
[From Amazon:] "The only 2-CD collection to date to span his entire career, 36 tracks from Hey Porter to his collaboration with U2, The Wanderer . And in between?"
Buy Now

Basically,according to Dan rather in the first DVD spotlight below, Johnny Cash had passionately wanted to record gospel music from the start (so perhaps he had accepted Jesus at an early age, perhaps before his baptism at age 12 [see the pole module below]), but Stan Phillips at Sun records refused, since he thought it wouldn't be commercial and thus Johnny Cash started recording more folk/country like songs. After he started to gain some fame as a singer apparently, Johnny Cash's life started going downhill, with drugs and booze until he met the love of his life, June Carter. She re-introduced him to Jesus Christ and then and there Johnny Cash either accepted Him for the first time (if his baptism at age 12 had been a mere ritual, not reflecting a true heart conversion) or re-dedicated his life to Christ (if he had really accepted Him previously and gotten away from Him) and was completely changed. [Please vote for which one you think it was in the pole module below.] June helped Johnny get off of the drugs and booze and he became more passionate about singing gospel songs and insisted on making some gospel albums and also began writing gospel songs (see the module on his gospel albums below.). He even wrote, directed and narrated his own movie on the life of Jesus, called "The Gospel Road" (see 2nd Amazon spotlight module.)

The Godpel Music of Johnny Cash - By Dan Rather

The Gospel Music of Johnny Cash
This is an in-depth investigation by Dan Rather of Johnny Cash's lifelong spiritual odyssey, his authentic faith, and his love for gospel music.
Buy Now

Was Johnny Cash a Christian before he met June Carter? VOTE and then give a reason for your answer.

Some of Johnny Cash's Gospel Music:

Whether out of sincerity or not, Gospel music has always been a part of Johnny Cash's life. Below are two of his greatest Gospel recordings:

In addition to being an a singer, Johnny cash was also an author in his own right. In addition to writing several hit singles, Johnny wrote a novel about Paul, the apostle, called "Man in White" (See 2nd widget in sidebar) He even wrote, directed and narrated his own movie on the life of Jesus, called "The Gospel Road" (see Amazon spotlight module below.) The movie contained several new original songs by Cash, including "He turned the Water into Wine." He also dabbled in acting, appearing in a few western movies and T.V. shows.

The Gospel Road
This is a really great movie all about the life of Jesus with great songs by Johnny Cash.
Buy Now