Anyone of my generation would have been captivated by glam rock star Marc Bolan. His pixie-ish smile, wild good looks and very British brand of glam rock endeared him to millions of teenage girls. The raunchy guitar he played on his Gibson Flying-V guitar won over the boys too.

Marc Bolan's death was a shock to many of us. This lens is about Marc Bolan's ultimate song 20th Century Boy! I love this song and have taught students to play it. It remains a firm favourite even with very young 21st Century Boys and Girls. Here I will share some tips on how to play it, some links where you can hear or buy 20th Century Boy, and some videos of the great man himself.

Picture courtesy of Wikimedia - Creative Commons - thank you to the photographer for donating the right to use this picture.

Just follow the tips below and listen to the song as you do.

Which is your favourite Marc Bolan video? - Is it 20th Century Boy? See if you can find it here!

Listen to the acoustic version of the video as you read this, then it will make more sense!

On the third time, play the great riff on string 6 -

This is followed by a great syncopated rhythm break using the E5 chord in 7th position. It helps to palm mute!

The Rock and Roll Bit in 20th Century Boy

Playing the A chord

You then move into the A chord for four bars. You can do a rock and roll break over this.

Then back into the Digga DUM and the riff twice

A and B7 chords

Follow with a bar of A, a bar of B7 (or B with a barre chord if you can manage it)

Finish with a single E strum that hangs nearly 8 beats before we start the Digga DUMs again!

The solo, like many Bolan solos, shadows the vocal line and is based on the E minor pentatonic shape given here and a higher position version I will give you later!

If you learn no other scale as a rock guitarist, learn Eminor pentatonic. You can play a whole bunch of great songs and solos with it!

Of course you can click out to TAB if you like, but it is so much more fun to get it with diagrams and a little listening.

This is simple raunchy rock and glam at its best! 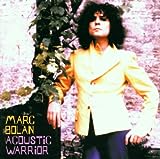 Acoustic Warrior. The Camden Collection [IMPORT]
Although the rock versions are exciting, the acoustic versions give you clearer listening when learning a song!
Buy Now

If you enjoyed this page, please let me know. Should I show you more T-Rex songs perhaps? You tell me!

Thank you for visiting.