Vladimir is a former champion ratter (retired). His hobbies are bushwalking, birdwatching and nature studies

From Shelter Kitty to Celebrity Cat

From his humble beginnings to superstar status, Morris, spokescat for the 9Lives Cat Food Company, never lost his common touch.

He inspired cats around the globe with his simple yet powerful philosophy on life: "The cat who doesn't act finicky soon loses control of his owner".

I was one of those cats touched by his greatness.

His lifetime achievements are breathtaking.

Morris was enticed by Hollywood moguls to make several box office hits on the silver screen, he was awarded the US Magazine's "Animal Star of the Year" three years in a row, and hosted his own TV special as well as making umpteen guest appearances with television personalities.

He toured extensively on behalf of the Morris Million Cat Rescue Campaign dedicating himself to facilitating the adoption of one million homeless cats - his wish was fulfilled.

His fame is such that, for all Animal Shelters, June 13 is now "Morris the Cat Day" .

Morris and his Rise to Fame

Fortunately for the world, he adopted Bob Martwick, who happened to be an employee of the Leo Burnett Advertising Agency. Morris, drawing on the strength of character forged in his early foundling days, displayed his raw animal talent from the very first day in his new home.

So Martwick listened to Morris, and arranged an audition for the feisty ginger tom. From the moment the cameras began to roll, the star quality in Morris shone like a brilliant beacon through the whole studios of the Advertising Agency. There was just one thing wrong, most humans had difficulty in understanding what Morris was saying.

Finding a human voice was difficult. Morris rejected many human voice actors before he finally chose John Erwin, whose vocalisations captured the essence of the innate Morris haughtiness.

And the rest, as they say, is history 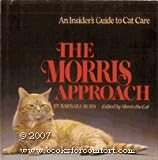 In 1980 Morris the Cat authored his own book, a breakthrough for all cat authors.

He opened the door for all cats who aspire to be published.

Morris inspired me to take up writing, he gave me the confidence to put my philosophy on paper. Thanks, Morris!

Burt Reynolds and Dyan Cannon both appeared in the movie Shamus with Morris.

Following his debut on the silver screen, Morris received critical acclaim and was dubbed the Clark Gable of Cats. Too true.

True to his vaunting spirit, Morris set his sights high and campaigned to be elected President of the United States in 1988 and again in 1992.

Although popular, with great name recognition, Morris lost both his bids for the presidency. Had he won, however, I wonder would he have kept a human as the official White House pet?

If you ask me, a cat is a perfect choice for President, after all we have nine lives! If some catastrophe should occur, we still have eight more lives to remain as Commander in Chief of the country.

But Morris never forgot where he came from, and in 2006, he launched the Morris Million Cat Rescue Campaign with 9Lives brand.

His ambitious goal: finding loving homes for 1 million homeless cats. Today, this target has been achieved and the worthy programme, initiated by Morris, continues to help save cats everyday.

Celebrations as the one millionth cat is adopted

In this photo released by 9Lives Cat Food, Morris the Cat and host Drew Carey celebrate the adoption of the one millionth cat in the Morris'Million Cat Rescue Campaign on the set of The Price is Right, Tuesday, June 24, 2008 in Los Angeles

Li'l Mo was also a shelter cat. this time from a refuge in Los Angeles.

When Morris was auditioning for a sidekick (and possible heir) Li'l Mo was in the right place at the right time, and luckily for him, looked like a mini Morris.

Is Morris the Coolest Cat ever?

Is he really the best?