Myrna Loy was one of the original goddesses of Hollywood's Golden Age. She was at one time so popular that she was voted Queen of Hollywood alongside the 'King' Clark Gable. She was one of very few performers who successfully made the transition from making Silent Movies to entering the new and challenging medium of Talkies. Whilst the world of Movies was making this seismic shift, she also made a dramatic change to her image on screen, having been typecast from the start as the young vamp temptress to becoming the very ideal of the perfect wholesome and mature American wife.

She was helped in this image change by the series of movies she made with William Powell. They complemented each other perfectly on screen and became one of the most popular screen couples of all time. They starred in 14 films together, 6 of them in the Thin Man series. It is still the most prolific pairing in Hollywood history. After WWII, Myrna's career peaked with her magnificent, subtle portrayal of Fredric March's wife in the award-winning hit movie, 'The Best Years of Our Lives', widely regarded as one of the best and most important movies made in Hollywood.

Myrna Loy's birth name was Myrna Adele Williams. The unusual Christian name was taken from a small town through which her father's train had passed. She was born in 1905 in Radersburg, Montana. Her father was in businessman turned politician who died of influenza when Myrna was 13 years old. Shortly after her husband's death, Myrna's mother moved the family to Culver City, California. She had studied at the American Conservatory of Music in Chicago and once settled in California she began to stage musical events at their home. Myrna and her friends joined in enthusiastically and, as well as normal schooling at Venice High School, Myrna was expected to take extra music and ballet lessons which she loved. She developed a particular passion for the theater after a visit to see Maeterlinck's 'The Blue Bird'.

When she left school at the age of 18, Myrna went to work as a dancer at the Grauman's Egyptian Movie House. In the Silent Movie days a troupe of dancers often used to act as a prologue - to introduce the movie and its characters. Her first dancing role was to introduce Cecil B DeMille's 'Ten Commandments'. This humble beginning was to markthe start of a brilliant career.

Her break into movies came when her publicity photos were seen by Rudolph Valentino. His wife, Winifred Shaunessy (her stage name was Natacha Rambova) arranged for some screen tests for Myrna. Although initially unsuccessful, she eventually got a part as an extra in MGM's silent version of Ben Hur. It got her noticed, she had her foot on the ladder.

Her first movie was 'What Price Beauty?' in 1925. In the same year she changed her name to Myrna Loy and also signed up for a 7 year contract with Warner Brothers.

She was often cast as slinky, exotic vamps in the Theda Bara mold in films such as 'Exquisite Sinner and Don Juan in 1926. Her first speaking role was in 'State Street Sadie' and in the early talkies, the vamp parts continued: camp follower in 'The Black Watch in

It looked as though she were typecast in the exotic, asiatic roles but she was becoming known as a good actress. She was making a name for herself in Hollywood and she was about to break out of the mold.

In 1933 Myrna gave an excellent performance in 'Penthouse' which persuaded the money men at MGM to give her a starring role in 1934 in the first of the Thin Man series with William Powell, at the time one of the biggest male stars in Hollywood. From the start Powell and Loy felt in perfect harmony when acting together and this showed on the screen, making them one of the most popular screen couples of the time. Their partnership was to be one of Hollywood's most prolific on-screen pairings, and they appeared in 14 films together.

The Thin Man made Myrna into an instant Hollywood star and established her new public image as a smart, capable, modern wife. The vamp image was gone for ever.

Just as her career was progressing nicely Myrna started a dispute with MGM over her remuneration. She demanded equal rights with her co-star instead of the half of the $3,000 a week earned by William Powell. To back up her demands she took a year off from filming and went on a tour of Europe. On her return, amazingly, the normally unbreakable Louis B Mayer gave Myrna what she wanted and a bonus of $25,000 in addition. It was an indication of the esteem in which she was now held.

Myrna's celebrity rose so high during the early 1930s that 'Men-Must-Marry-Myrna' Clubs were formed, and James Stewart apparently said "I shall only marry Myrna Loy"! However,Myrna's actual married life was not greatly successful.

She married in 1936, Arthur Hornblow, a Hollywood producer and they lived in Coldwater Canyon, Hollywood.

With fourth husband,
HowlandAfter several separations they divorced in 1942 and Myrna immediately marrried John Hertz junior, a rich advertising executive but, again it was not to last and they divorced in 1944; the following year Myrna married Gene Markey who had previously been married to Joan Bennett and Hedy Lamarr. He was a known womaniser and they divorced in 1950 due to his numerous affairs. Myrna's tangled love life continued when she became involved with Howland Sergeant who was part of a UNESCO delegation. They married in 1951 but divorced after 8 years together. It was Myrna's last marriage. She had no children although remained close to the children of her first husband.

There now began the most productive part of Myrna's career.

Myrna with Clark Gable in
Manhattan Melodrama Between 1934 and 1939 she made 21 movies, including outstanding successes like 'Manhattan Melodrama' in 1934, the film John Dillinger watched before being gunned down, 'The Great Ziegfeld','Libeled Lady', 'Wife vs. Secretary' all in 1936, and 'Test Pilot' and 'Too Hot to Handle' in 1938. In 1937, in a poll by 53 newspapers all over the country, she was crowned the "Queen of Hollywood" by Ed Sullivan, opposite Clark Gable's "King". During this period she was one of the highest paid stars in Hollywood.

During WWII Myrna took an active part in the money raising activities that Hollywood held for War Relief, and she devoted h erself to Red Cross work and selling war bonds. She helped to run a Naval Auxiliary Canteen and went on many fund raising tours.

In 1946 she left MGM after 15 years and was free to choose her own projects. The number of movies she made went down but the quality remained extremely high. She started her independent career with what many consider to be her best ever movie, 'The Best Years Of Our Lives' when she gave a mature and sympathetic portrayal of Milly, the wife to whom Fredric March comes home after the war. She was still massively popular and in swift succession she made 'Song of the Thin Man', the last of the series, 'The Bachelor and the Bobby-Soxer' both in 1947, 'Mr. Blandings Builds His Dream House' in 1948, 'The Red Pony' the following year, 'Cheaper by the Dozen' in 1950, and its sequel 'Belles on Their Toes' in 1952. All were box-office successes.

The Best Years Of Our Lives - Myrna Loy on the left with Fredric March, Dana Andrews, Teresa Wright and Hoagy Carmichael

After 1952 she made fewer and fewer film and became actively involved in politics. After serving as a film advisor for UNESCO she served as an advisor to the National Committee Against Discrimination in Housing, throwing herself into this new work with the same enthusiasm she put into her movie roles.

In later life Myrna renewed her enthusiasm for live theatre. In 1963 she performed in 'Marriage-go-Round' in New England and continued tok perfom regularly. She made her Broadway debut in 1973 in a revival of 'The Women' She also became a founder member of the American Place Theatre, a non-profit theatre set up to help new writers develop.

After surviving breast cancer and two masectomies in the 1970s, Myrna Loy died in 1993. Her ashes were interred at Forestvale Cemetery, in Helena, Montana. She was 88. The Myrna Loy Center in Helena, which hosts films, educational programs, and live performances, was named in honor of Helena's brightest star.

The Best Years of Our Lives
Buy Now 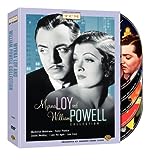