When these boys all auditioned for this years x factor i am sure they never in their wildest dreams imagined they would become the most talked about Boy band in the UK and be followed around by crowds of screaming girls.

Liam Payne, Harry Styles, Zayn Malik, Niall Horan and Louis Tomlinson all auditioned for the show as solo acts and made it all the way to boot camp because of their excellent vocals.

However as boot camp came to an end, the boys were lined up along with all the other losers and told they were going home.

The cameras showed their devastated faces especially Liam Payne who had got all the way to Simon Cowell's house when he auditioned at just fourteen only to be rejected because he wasn't ready.

As the lads prepared to leave with thoughts of only their shattered dreams their names were suddenly called out asking them to make their way back to the judges.

The five boys were then told they were too good to leave the competition and so the judges were putting them all together to form a new boy band.

The boys were ecstatic and could be seen jumping about and hugging each other. When they arrived at the Judges house they realised Simon Cowell was their mentor and performed together for the first time 'Torn' by Natalie Imbrulia.

it was already obvious by this stage that Liam Payne was the lead vocalist, and the boys worked well with each other. I don't think there was ever any doubt that these boys were going through to the live shows.

The boys were named One Direction which was pretty fitting for the group as they all wanted the same thing To be singers and to be famous. All the boys had a make over for the live shows making them the hottest young boy band on television and their fan base continued to grow.

They were constantly followed by excited fans with one girl fainting when she went to see them. More recently a girl fan had her foot run over by the car in which one direction were travelling in, the girl who said she was just trying to get a closer look was taken to hospital by ambulance to have her foot looked at.

Every week when the boys preform on the X Factor show you can hardly make out the judges comments due to the crowds of screaming girls. When Dermott asked the boys who was the most popular they told him it was Harry Styles followed closely by Liam Payne.

Mentor Simon Cowell wanted the boys to appear single as they thought it would stop the young girls voting if they knew the lads were in a relationship but both Liam Payne and Louis Tomlinson have long term girlfriends and Zayn Malik is said to be seeing fellow contestant Cher Lloyd after they were caught kissing last week.

Each week we have seen these boys grow and become stronger as a group both emotionally and vocally. Now the boys are even attracting celebrity fans.

Recently Take That were talking to Scott Mills live on Radio 1 where they all agreed that One Direction are really good and remind the Take That boys of themselves when they were first starting out.

Also on their fan list is Cheryl cole who admitted to the lads that they were her guilty pleasure and she finds them so cute that every time they perform she just wants to go on stage and give them a big hug (Lucky Lads).

And with a band never having won the X Factor, could this new Boy Band go all the way and win the show? Even if they don't something tells me these boys are going to be around for a long time to come.

A lot of rumours have been flying around recently about Cher Lloyd and the boys from One Direction, first she was linked to Liam and then to Harry but it is actually Zayn Malik that Cher has been seeing. Cher and Zayn both 17 have tried to keep their romance a secret after Simon Cowell banned contestants from dating. Last week the two ended up kissing in front of housemates and their relationship became hot gossip in the x factor house.

Cher and Zayn first bonded after they made it to the final rounds for the show and when they were having a midnight drinking party in the x factor house two weeks ago they ended up kissing and things just went from there. It was reported that Simon Cowell knows about their relationship even though he made it clear that he didn't want contestants dating each other because he felt it would be distracting. One Direction lad Louis Tomlinson is also in a relationship with Hannah Walker who he starred alongside in a school production of Greece and Liam Payne is in a relationship with his school sweetheart Shannon Murphey.

As you may have heard that the group song sang by the x factor contestants on Sunday night result shows is pre recorded and then mimed by the contestants on the night, but now it has just been revealed that top pop producers and professional singers have been recording backing vocals for Cher Lloyd and One Direction. Dannii Minogue and Louis Walsh are both angry saying it gives there rival Judges Simon and Cheryl an unfair advantage and claim that live vocals by both Cher and the One Direction boys were drowned out by professional backing singers.

The One Direction lads had a hard week in the semi final week, Mentor Simon Cowell was absent due to flu, and Zayn was also absent after his Granddad sadly passed away. But the boys showed just how dedicated they were when they showed up at the studio at 8am ready to rehurse. The boys gave two winning performances for the semi final and all their hard work paid off when they were told they had made it into the final next week. Go One Direction!!!

The lads got to perform with their Idol Robbie Williams and then again with Take That, but unfortunately the boys didn't make the final two, however don't threat a mentor and music mogul Simon Cowell promises "This is just the beginning for these boys".

3. My life would suck without you

4. Total eclipse of the heart

6. Something about the way you look tonight

9. You are so beautiful to Me

13. She's the One (with Robbie Williams)

Which Lad is your Favourite?

After the X Factor

Since being in the final of the X Factor, the One Direction boys have signed a £2 million record contract with Syco Music.

This year they got to go back onto the X Factor and preform their new single.

Their Debut Album 'Up All Night' became the fastest selling debut album on the UK albums chart of 2011.

1. What Makes You Beautiful

4. One Way or Another

29. I Should Have Kissed You

Will One Direction Make It To Number One In The US?

The lads never imagined they would be so successful over in the US, but when they were recently performing 'Up All Night' they were swamped by screaming fans. Later while in New York, the lads were forced to phone the police when female fans broke in to their hotel room. The boys were forced to move floors just to avoid them.

They are expected to sell 180,000 copies of their debut album 'Up All Night' in the US this week, making them the first UK group to hit number one on the billboard chart. That is not the only good news the lads have received recently, children's channel Nickelodeon have just confirmed that One Direction will soon have their own TV series in the states.

The lads are also set to appear on 'Saturday Night Live' on the 7th April, which will send their popularity in the states through the roof.

One Direction In The US

It has been nearly three years since the One Direction lads released their first album 'Up All Night' and they are still going strong.

In November 2013 they released their third album 'Midnight Memories' which became the best selling album of 2013, selling over 4 million copies worldwide.

6. Don't Forget Where You Belong 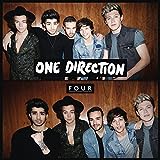