Very few people have mastered fingerstyle blues guitar like Jim Bruce. His timing and phrasing are impeccable. Born in Sheffield, England. Jim Bruce has traveled the world, living and working in Paris, the USA, Germany, and Denmark. Jim is one of the few master guitarists who is also a talented teacher, and his series 'How To play Acoustic Blues Guitar' is fast becoming the standard to reach.

Jim was kind enough to give me an exclusive interview.

Adrian: What made you start playing guitar?

Jim Bruce: When I was 14 I heard Dylan singing TimesThey Are a-Changin‘ on the radio. I bought the LP and heard Don’t Think Twice fingerpicked. I was hooked – that was what I wanted to do. Don’t Think Twice was the first song I ever learned. I never strummed at all, and I’m not very good at it!

From Folk To Ragtime

Adrian: Fingerstyle blues is not everyone’s cup of tea. What attracted you to the style?

Jim Bruce: After playing folk until about 1973, I heard a guy in a club in a London blues club play Kat’s Rag - hew as also a pretty good ragtime piano player as well. It was simple compared to some of the stuff I was playing, but there was this superb syncopation about it. Shortly after moving down to London, I found some old Biograph Blake albums and locked myself away for 5 hours a day, for about a year, until I could play it! I suppose it’s always been the challenge that attracts me.

Adrian: What’s the worst gig you ever played?

Jim Bruce: That’s a tough one – there’s so many! I can remember playing on the London Underground for hours making nothing. I still play on the street, because I like the feel of it, but back then I wanted to be noticed, not ignored. It was also nice to eat, now and again!

Bad gigs were normally in noisy bars, when no-one listens at all. Thankfully, I don’t have to do this anymore – I can choose where I play.

Funnily, when I was a kid, the worst gig was also the best. I played one song and the club owner didn’t like it – he wanted Country. It was the tradition in UK at that time to pay artists if your rejected them, so I got paid and had a nice night somewhere else!

Adrian: Your style is straight ahead with a Blind Lemon feel. Who else influenced you?

Jim Bruce: I played only complicated ragtime blues guitar for several years (take a look here) – Blake stuff and Scott Joplin rags. I never bothered with blues in E or A, as I thought they were too simple.

Of course, later on I realized my error. I saw a film with Lightnin’ Hopkins who didn’t play anything very complicated, but the technique and the power was completely awesome. Maybe we need time to mature. As a youngster, I just wanted to show how good I was.

No matter how well we play, none of us will ever match up to the old guys. However, we can incorporate their techniques into our music and pay homage. Thanks to Blake, Blind Boy Fuller, Lightnin’ Hopkins, Mance Liscomb, Floyd Council, Scrapper Blackwell, Reverend Gary Davis and many, many more . Guitarists need to watch as many old blues guitar videos as they can to try and understand the attitude of these guys.

Adrian: How many guitars do you own? What are they?

Jim Bruce: They come and go. I play hard, and don’t really think that an incredibly expensive guitar will make you play better. Often, when I play somewhere, people say ‘Great sound – what’s that guitar?’ It doesn’t really matter – a good guitar just makes it a little easier for you, that’s all. At the moment I have a Vintage VE300, with Shadow electronics and tuner (for the street), an Aria, which I’ve had for 35 years, and a Martin 000×1

Adrian: Do you have any tips for beginning players?

Jim Bruce: Obviously, take it slow. Look at the basics, such as the alternating thumb patterns and practice them until you can play them in your sleep! Build on the strong basics and gradually increase the complexity of the songs you tackle. A couple of years ago, I started to produce acoustic blues guitar lessons, which made me re-examine all the old classics. Incredibly, I learned a lot, even after playing for 40 years or so.

Guitar players progress in levels, sometimes sticking at a level of expertise for some time before breaking through to the next. Practice an hour in the morning, no matter what, and then in the evening. Don’t fit it in, but fit everything else around it. If you have to get up earlier, or go to bed later, then do it.

Jim's View Of The Blues Guitar Styles Of Blake and Broonzy

It would be great if some old film were uncovered that showed Johnson or Blake playing in a club or elsewhere. Then we could actually see how their fingers produced those wonderful sounds.

Ry cooder says he thinks Blake played with a light touch, while other sources maintain that he had a hole in his right thumb, indicating that he played hard. On at least one song he says' boot that thing' - this also indicated that he had a heavy touch. I've experimented playing Blake every way possible, using a light and heavy touch on different gauge strings, adjusting the guitar bridge height accordngly. It's very difficult to match the playfulness of some of his songs in G such as That'll Never Happen No More or Too Tight Blues.

Of course, we're lucky enough to have film clips of old bluesmen, such Big Bill Broonzy, Mance Lipscomb and Lightnin Hopkins, which give us great insight into the various playing styles. Many modern masters, notably Stephan Grossman, Ry Cooder and Eric Clapton have done much to maintain an interest in blues guitar. Even so, that original bluesy feel is still hard to come by.

Take Big Bill Broonzy's music, for example - it's fairly easy to work out where our left and right fingers should be, but the all-important swinging rhythm is another thing entirely! It's almost magical. Quote from Big Bill about timing - " you can either ride on the front of the horse, or the back of it and that's what I do when I play my guitar". His right hand thumb beat lags slightly behind the beat and produces the swing. Easily said, but try and do it! At the same time, he's using just one finger on the treble strings to lay down some syncopation.

Blind Blake was the King of Ragtime guitar, playing with great speed and accuracy.

His chord progressions laid the groundwork for many jazz and swing standards. 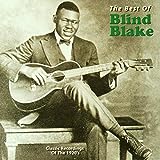 Go with the flow, against the grain.

Say, why not say tell us how amazing it all is, living and all ...