What is there to live for? True Love.

"Come my love I'll tell you a tale" is the opening line of the theme song to The Princess Bride. It's a story about a young couple and their true love.

Since its first release in 1987, The Princess Bride has captured the hearts of millions, becoming one of the most watched movies of all time. And why not? It meets the requirements of what makes a great movie by combining every emotion a human can experience.

The Princess Bride is not only a great romantic comedy, but it is full of suspense, intrigue, action, drama, and adventure making it the out of the ordinary fairy tale story.

Celebrating over 30 years of this movie with the brand new releases of the film on Blu-Ray. With each special edition you will enjoy all new features and behind the scenes footage that have never been released. There are also other collector’s editions you may like along with special gifts to commemorate the movie.

Image and product Amazon. See below for details.

Copyrighted Material by Favored1. Do not copy. Photo credit by Favored1, Google Images or Amazon unless otherwise noted. This artwork is licensed under the Creative Commons Attribution-ShareAlike 3.0 License.

As you wish! Wouldn't that be nice if we all got what we wished for in life?

Have you seen The Princess Bride?

Unfolding the Plot - Is this a kissing book?

The story begins with a young boy (Fred Savage) who is at home sick in bed. The grandfather (Peter Falk) comes to visit and shares a book that he read to his son when he was sick.

As the grandfather sits down he opens the book and begins to tell the tale of two young lovers.

As you wish - the phrase every girl wants to hear!

Buttercup a commoner (Robin Wright), and Westley the farm boy (Cary Elwes) had fallen in love. Every time Buttercup made a request to the farm boy, he responded, "As you wish." She came to realize that his response to her demands were done out of love, and saying "as you wish" really meant I love you.

In the middle of a sentence the sick boy yelled out to his grandfather to stop reading. He had become upset because it didn't seem to be anything but a love story. He was looking for adventure, thrills and tragedy. Grandpa assured the lad that those scenes were coming and he had to be patient.

Westley wanted to marry Buttercup, but he was poor and couldn't afford the dowry. He decided to sail away to make a fortune and then return to claim his bride. Buttercup didn't like the plan and resisted not knowing if he would return for her. The farm boy swore he would by saying, "I will always come for you." Buttercup asked, "How can you be sure?" Her love replied, "This is true love, think this happens every day?" With that Westley left Florin.

The Original Movie 1987 - True love that started it all.

The Cast of The Princess Bride

Enter the Dread Pirate Roberts - Can't trust a man in a mask.

It wasn't long before Buttercup got word of the Dread Pirate Roberts, and that Westley was believed to have been murdered by him. Buttercup declared that she would never fall in love again.

Five years pass and the evil Prince Humperdinck was to declare his wedding to Buttercup on the 500th anniversary of the Florin City. She didn't love the Prince and her only solace was when she rode her horse.

One day while Buttercup was out riding, she was captured by the evil Vizzini (Wallace Shawn) who was plotting with the King to start a war. With the Princess kidnapped, they had bargaining power and would make it look like the King's enemy was the one who killed the Princess.

The Mastermind Behind it All

Now Fezzik (Andre' Roussimoff aka the Giant) and Inigo Montoya (Mandy Patinkin) worked for Vizzini, but they were not wicked and didn't want to kill her. The two men became friends from that time on and would do what they could to save Princess Buttercup.

Did he predict the future about marks?

Roberts wins the sword fight, but instead of killing Inigo he knocks him out with the end of his sword and continues to hunt down Vizzini.

When the Dread Pirate Roberts catches up with Vizzini their confrontation puts the Princess in danger. Roberts suggests that a battle of wits take place. Vizzini, being arrogant, felt confident that the Dread Pirate would be no match for him, so he accepts the challenge. To Vizzini, it would be inconceivable to lose.

Both Vizzini and Roberts sip from a drink that had poison in it. Vizzini thinks he has outsmarted Roberts and switches the drinks, but he has failed in the battle. Buttercup was blindfolded and did not know which man had died, until Roberts untied her.

With the Princess now under new captivity she discovers that her true love is alive and vows she will kill herself if the Prince insists on marrying her. In their attempts to escape they are captured. Westley, her true love, is tortured by Prince Humperdinck and "mostly" dies, leading Princess Buttercup to believe her beloved is dead (again).

Photos in Movie Sequence - Click on each photo for larger view with caption.

Anniversary Cast Celebrations & Special Scenes - A look back at the making of the movie with the cast.

The "Princess Bride" cast interviewed during their reunion photo shoot.

The Princess Bride - ANDRE The Giant, A Look Back

Still Available - The Princess Bride: 25th Anniversary Edition - What are the other goodies on this Blu-Ray? The Special Features include:

The two part 25th anniversary edition has many amenities you will enjoy, starting with tributes and commentaries by the director, writer and a few of the actors.

As You Wish: The Story of The Princess Bride;

The Dread Pirate Roberts: Greatest Pirate of the Seven Seas;

Love is Like a Storybook; The Princess Bride the Untold Tales;

The Art of Fencing; Fairytales and Folklore;

Who is your favorite character in the movie?

These are two of my favorite scenes in the movie. Because they are both really, really good, I wanted to know what you thought.

Do you have a favorite? How would you compare two of the best parts of the movie against one another?

Which scene do you think was best?

Scullyvan 4 years ago Both are wonderful, but the swordfight was an amazing sequence.

Which scene from the film do you like best?

This edition includes special features: Commentary by director Rob Reiner; Commentary by story author/ screenwriter William Goldman; "As You Wish: The Story of The Princess Bride".

Mockumentary; Behind the scenes footage shot on the set by Cary Elwes; "Love is Like a Storybook Story" ; "Miraculous Make-up" ;

This is my favorite scene in the movie and it is in the first part of the film.

My Favorite Scenes from The Princess Bride

My Favorite Scenes - I have selected my favorite scenes in the movie for you to view. Enjoy.

1. As You Wish - Scene from The Princess Bride

2. Anybody Want a Peanut - Scene from The Princess Bride

3. He's Been Mostly Dead All Day - Scene from The Princess Bride

6. My Name is Inigo Montoya - Scene from The Princess Bride

7. Vizzini - Scene from The Princess Bride

8. Meeting the Prince - Scene from The Princess Bride

9. Dialectics - Scene from The Princess Bride

10. "Mawwage" the Wedding Scene - Scene from The Princess Bride

Once Upon a Time ... Story Book Love - Scene from The Princess Bride

Movie Soundtrack Clips - Listen to the music behind the movie.

The Princess Bride 02 - I Will Never Love Again

Chorus Lyrics to the Love Song

But it's as real as the feelings I feel.

But it's as real as the feelings I feel.

It's as real as the feelings I feel.

I Will Never Love Again - The Princess Bride Music CD

The Friend's Song from the Princess Bride Soundtrack 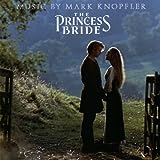 Princess Bride
All 12 songs from the movie The Princess Bride, including the theme song Storybook Love.
Buy Now

Drop ... your ... sword! Not something every prince wants to hear!

Inigo is still in search of the six fingered man who killed his father 20 years ago. His only hope was to rescue the Princess and get into the castle where the evil Count Rugen (the murderer) lived. He knew he couldn't do it alone and went in pursuit of finding The Dread Pirate Roberts who outsmarted Vizzini.

Along the way he learned who Westley was and that he had been killed by the Prince. With Westley dead, Inigo and Fezzik seek the miracle man (Billy Crystal) to buy a miracle that would save Westley's life.

The climax of the adventure continues as Inigo, Fezzik and (mostly dead) Westley set out to rescue the Princess before the wedding, with Inigo close to being able to avenge the death of his father by the six fingered man.

The three "amigos" are victorious saving the Princess, and Inigo's revenge comes to an end with his killing of Count Rugen.

Note: Although this movie is rated PG, there is one curse word at the end of the scene where Inigo kills Count Rugen.

The White House - Happily Ever After

Of course, there is a white horse (actually four), and they (Westley, the Princess, Inigo and Fezzik) all ride off into the dark night.

Where Are the Cliffs Anyway?

The Cliffs of Insanity Location

The Cliffs of Insanity are actually the Cliffs of Moher in County Clare, Republic of Ireland.

Are You a Movie Fan Collector?

Did you know that you can collect these character toys?

They even have bobbleheads.

Princess Buttercup and all the others. 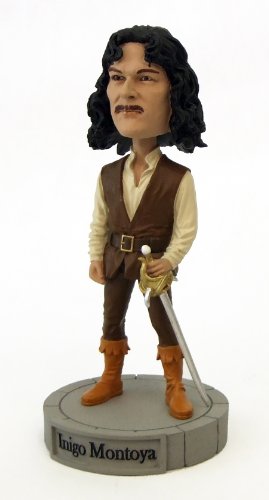 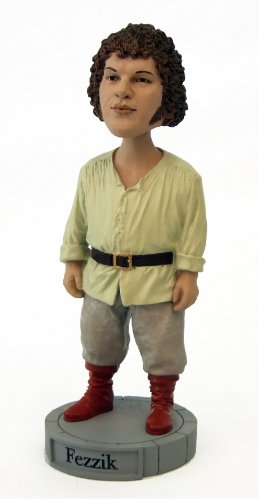 This is true love ~ you think this happens everyday?

The Kiss ~ As You Wish

Our romantic comedy comes to an end with the famous kiss that surpasses all other kisses. Westley and Buttercup leave Florin and live happily in a far away land, with the Prince left in humiliation.

The writer brings us back to present day. As the grandfather closes the book, his grandson shares how he liked the story after all and hopes he would return tomorrow to read it again.

On his way out the door, the grandfather turns to the boy, smiles and says, "As you wish," cleverly tying the end of the story to the beginning.

And they all lived happily "Ever After" (oh, that is another movie... oops!)

More information for The Princess Bride

Thank you for your time. Hope you visit again soon!

Look for me here or on the web for related topics.

*Note: The "RELATED HUBS" items are not mine and are not necessarily endorsed by me.