Puss in Boots (2011) delivers action, adventure, and angst - and that is just for starters. This Latin cat proves he has what it takes to step out of the shadows of the Shrek saga. In fact, he does it effortlessly. The 3D effects are like the sprinkles on a hot fudge Sunday. Take it from me, you will love the new animated film Puss in Boots starring Antonio Banderas.

Below you will find character information, plot summary, and my review of the picture. You will also discover quizzes, Puss in Boots trailer and more. All details can be found in the Contents at a Glance menu.

Warning: The Puss in Boots Review will have spoilers. Please avoid reading it if you do not want to be spoiled.

Puss in Boots Trailer - Look who's been a bad kitty

So maybe Puss is not as bad as his reputation may suggest; however, some of his friends in this new flick may be. Below is a short preview for Puss in Boots film.

Special features listed for Puss in Boots movie include:

Does Puss in Boots deserve his own movie?

Puss in Boots Review - About the Movie

How can an egg and a cat be brothers? They are not genetically related; they both ended up in an orphanage in Sanfrando where the two became "blood" brothers (Not sure if that is apt description as I don't think Humpty actually bleeds). The movie follows the typical premise of two brothers who drift apart and go off in separate directions in life: One choosing crime and the other choosing to be a hero.

These estranged brother's are further separated from each other when Humpty tricks Puss in to committing a crime and Puss turns his back on his brother. This is the back story for the two as they meet seven years later to steal the golden goose. The plan is Humpty and he uses Kitty to peak the cats interest which she does. Not that it would be hard for any female to get Puss' attention. He is the "love them and leave them" type of feline who never lays his hat at any one's place for too long.

Puss in Boots Soundtrack - Give it a listen 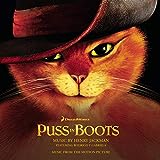 Puss In Boots
This Soundtrack features the music from the movie Puss in Boots. It has 24 titles on it. You can sample the songs by clicking the link or picture to the left.
Buy Now

Puss in Boots shares his history with Kitty; much to her chagrin. She even falls asleep on Puss and he has to wake her up. Poor Puss! Imagine pouring you heart out to someone and you catch them counting z's.

Jack and Jill are outlaws with no limits on their violence. Jack wants to be a father but Jill isn't ready be a mother - at least not to a human child (She doesn't want to wreck her well maintained body.) I think her perception may be slightly off in this exclamation.

Eventually all characters are revealed to be working for Humpty, the rotten egg, and Puss is sent to prison. With the aid of Kitty Soft Paws Puss is able to escape just in time to save the town from the golden goose's angry mother.

In the midst of everything these brother work together and Humpty makes a self sacrificing decision and lets go of the rope so Puss can save the golden goose and prevent the destruction of the town they grew up in. This is the redeeming moment for Humpty, and luckily he survives. He find happiness with the golden goose and ends up returning to the giants house.

Kitty who effortlessly steals Puss money, and who continually reminds him that he hit her in the head with a guitar, seems to sail off into the sunset. The relationship is left opened ended. Perhaps the two will meet again? Can anyone say sequel?

All Paws No Claws (color) by pussinboots

Kitty Soft Paws is a respectable high end thief who knows how to yield a sword. She has been described as having "catitude". Kitty is dynamic dancer and can match Puss in ego and style.

Humpty Alexander Dumpty, Puss in Boots former best friend, estranged brother, is an inventor and planner. His knowledge and creativity are attributes Puss admires in Humpty. As a child he was a loner. He feels like he never fit into his family.

What trouble will these two fetch?

Jack and Jill are inseparable, greedy and mean outlaws that Puss in Boots will have to outwit in order to complete his journey.

Who voices the characters?

Fear me, if you dare!

Puss in Boots in his Debut Movie Role - Shrek 2

Shrek 2 (Widescreen Edition)
Puss in Boots first appeared in Shrek Two as the only one who would get rid of an ogre problem. The Ugly Step-Sister Doris describes him as a solitary figure and dangerous when she tells the King, "Frankly he doesn't like to be disturbed" giving the King the unspoken warning to disturb him at his own risk. In this film we learn that Puss in Boots has a reputation and based on his reputation he can charge a huge sum for his services. While he looks cute he will lure you into a false sense of secutiy when be makes his eyes go big. We also learn he is a very talented with a sword. He is also very loyal and can admit when he is wrong (which he did after meeting Shrek). He later takes on a band of guards in Shrek 2 to repay his debt to Shrek allowing Shrek to stop Prince Charming and Fairy God Mother from defrauding Princess Fiona.
Buy Now

How can you be a reciever of the wedgies, when you are clearly not a wearer of the underpants?

Puss in Shrek 3 - The character grows

Shrek the Third (Widescreen Edition)
Puss in Boots appears in Shrek the third to help Shrek deal with becoming a father and finding the next heir for Far Far Away. We get to see more of his sword action and see him transformed into Donkey while Donkey comes to inhabit his body.
Buy Now

I have shamed myself.

Shrek the Halls - The Cat and Christmas

Shrek the Halls
Puss in Boots celebrates Christmas at Shrek's house. He tells the story of Santa Claus as he see him. In his rendition Santa Claus is a hot latin cay who wears red boots, red crevat, and a santa hat. We don't get to hear more of his tale because he gets distracted by a shiny ornament ball. We do learn he plays a guitar.
Buy Now

Feed me, if you dare!

Shrek Forever After (Two-Disc Blu-ray/DVD Combo)
In this alternative world we see Puss in Boots has gained a little weight and no longer wears his signature boots. He relies on Fiona to feed him milk and brush his hair. He does get to save Shrek in this forth tale. He gets Fiona and Shrek away from the Pied Piper and encourages Shrek to continue wooing Fiona (she doesn't realize Shrek and her are married in another life).
Buy Now

Puss in Boots doesn't like water. In Scared Shrekless he gets sprayed with water and runs away.

In Scared Shrekless Puss in Boots partakes in a contest to tell the scariest story. In order to win the contest you would have to spend the night in Lord Farquaad's haunted castle. Puss and Donkey tell a story about checking into the Boots Motel, but they are argue over whose version is better.

What Do You Think About the Puss in Boots Movie? - Share Your Thoughts