Not Just For Kids!

Science songs are an easy, fun, and effective way to teach kids of all ages about science! Isn't it impressive when you hear a child sing a tune filled with educational lyrics?

One of the first songs kids learn is the ABCs. It would be difficult for many young children to memorize 26 of anything. But add melody and rhythm, and learning becomes play!

Children's brains need sensory stimulation in order to grow properly. The common senses of sight, sound, smell, taste, touch and also movement, when used together, produce the best learning environment. If there is a learning disablity in one part of the body, the other senses can oftentimes compensate for each other.

Music, dancing, clapping and instrument playing, when combined with educational content, is a successful way to motivate kids to learn and help keep them focused.

The Elements Song - by Tom Lehrer

Check out all the fun versions of this song!

A laboratory technique used to make millions of copies of a particular DNA sequence.

Bio Rad "GTCA Song" is to the tune of YMCA by Village People.

Stands for the nucleobases that make up DNA: Guanine, Thymine, Cytosine, Adenine

"Electricity", "Energy Blues" and "The Greatest Show on Earth"

The Atom Song - By Mike Offutt

This song is about T2* (pronounced "tee two star"), the time constant for the decay of a magnetic resonance signal in the XY plane. It was written for the May 2002 meeting of the International Society for Magnetic Resonance in Medicine.

To the tune of "Sugar, Sugar" by The Archies

A song about molecular mechanisms by which muscles contract, to the tune of "My Sharona" by The Knack.

"Catchy music with a good beat is a more powerful medium for memory and learning than most people realize and is still severely underutilized in the academic realm.

In the late 1950's and early 1960's, Hy Zaret and Lou Singer produced a six album set of science-themed folk songs for children. Titled Ballads for the Age of Science, they included a total of 47 songs on Hy Zaret's label "Motivation Records". Three of the albums were performed by Tom Glazer and Dottie Evans, two by Marais and Miranda, and another by Dorothy Collins. Hy Zaret wrote the lyrics and Lou Singer composed the music. These fun science tunes were also sold as the Singing Science Records.

Singing Science Records are re-released as a set on 6 CDs! 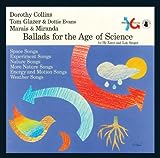 Ballads for the Age of Science
For the first time in over 50 years, Harbinger Records is proud to release a six-CD box set of Ballads for the Age of Science, the most successful educational recordings projects of all time. Even today, Baby Boomers have fond memories of these catchy songs. The original recordings are now cherished by collectors both for their beautiful covers and for nostalgic memories of their youth. These songs introduce scientific concepts and terms using catchy, easily learned words and music.
Buy Now