Where It Started - Where It Is Now

Arachnea: How did Scrivener start out? In what ways has it evolved?

Keith: The first version of Scrivener that was scrapped before release had four entirely separate modes that didn’t integrate well at all. Even with version 1.0 (for Mac), there wasn’t much fluidity in moving between scrivenings mode (where you can view multiple sections as a single document rather than in isolation) and the other main view modes. I hope that it has evolved so that its various features have become better integrated. That’s what I’m always trying to do. It has a lot of features, and I’m always looking to streamline them and make them work better together. 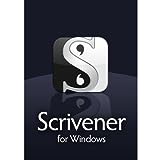 Scrivener [Download]
Scrivener is the tool that got my keister in gear and writing. As a result, I'm more serious about writing than ever before.
Buy Now

Writing is serious business. Putting words on paper in a way that conveys meaning to the reader is half the battle. Keeping the work organized and details readily available can be difficult when there are numerous components to the storyline. Being able to work efficiently within the space the words occupy is a greater challenge many times than the selection and placement of words. Scrivener makes the greater challenge doable for the writers that use it. Initially, Scrivener was available only to Mac users, now it's available for Windows also.

Though I'm no longer able to recall where I first heard about Scrivener, I was glad to have stumbled upon it. It's versatile in the ways I require versatility for my writing pursuits. It's handy to have everything all in one file, rather than having to keep track of the various files and printouts that contain information I do print out back-up copies of my work, just in case of a complete loss of the electronic information.

This article includes an interview with the developer of Scrivener, Keith Blount. It's my discovery of Scrivener that propelled me to a level of seriousness about writing. I am sharing my enthusiasm for this powerful writer's tool as a result. Please visit Literature and Latte for more product information as well. Literature and Latte is the place where Novel in a Day (NIAD) takes place every year.

Arachnea: How did you come up with the idea for Scrivener?

Keith: I’ve always had ambitions of writing a novel, and at the time I was also working on a thesis. I found that my approach to both was similar: I wrote the main ideas out first, not necessarily in a linear fashion, and then I would begin to organise them before putting it together into a draft. That organisation was the tricky part. All of my ideas would be scattered about in different Word files, and to organise them, I would write synopses of the various sections either in Excel or on index cards, rearrange the rows in the spreadsheet or card to find the structure I wanted, add in some more rows or cards for other sections I needed, then try to bring all of the various Word files together into a single document. Then I’d refer to that in one window while writing my draft in another window. It was messy!

So I figured that there must be a better software solution for all of this: something that would let me work on individual sections in any order I wanted, to assign a short synopsis to each of those sections that could be viewed in some form of overview such as an outline, and which would allow me to structure the whole using the overview, and also allow me to view the sections on their own or as part of the whole. But it turned out that there was nothing that did exactly what I wanted. And that’s how Scrivener was born.

SCRIVENER ESSENTIALS: Scrivener 1 for Windows (Scrivener Quick Start Visual Guides)
Just looking for the basics to get started. Then this quick start guide will be what you need to start using Scrivener.
Buy Now

The Development of Scrivener

Keith: Before Scrivener, I had no background in software development. I studied History at university, took a Masters in medieval literature, and spent time working in various temporary jobs, including working for the NHS, before becoming a primary teacher. But I loved the idea I had for Scrivener so much, that I decided to teach myself to code, and that’s how I stumbled into software development.

Arachnea: What was your biggest challenge in developing Scrivener?

Keith: Perhaps the biggest challenge was learning to program in the first place. I’d dabbled with some scripting languages before, but I thought that learning to code wasn’t something I’d be able to do, as I’d always thought of myself as an arts, literature and humanities sort rather than someone who could think in terms of code. I first had the idea for Scrivener when I was using Windows, before moving to a Mac, and I bought some books on coding in C++ but they made no sense to me at all. When I moved to a Mac, I found that the development tools came for free, and started looking at some tutorials. That’s when it clicked - the tools and language used for Mac development just really made sense to me. So I bought a couple of books (Programming in Objective-C by Stephen Kochan and Cocoa Programming for Mac OS X by Aaron Hillegass) and went from there. (I have the utmost respect for our Windows developer, as it’s a much more difficult platform to develop for, I think.)

It was also difficult settling on the right interface that integrated all of the features I wanted in the most organic way. I spent a year working on a version of Scrivener that became a learning experience that I scrapped. I started over, integrating everything much more for Scrivener 1.0 for Mac. But it wasn’t until Scrivener 2.0 for Mac (which is equivalent to Scrivener 1.x on Windows, as that came later so the version numbers are different) that I felt the main components of the interface were right and well-integrated.

Your Guide To Scrivener: The Ultimate Tool For Writers
Scrivener is the ultimate tool for writers. It makes sense to use the ultimate guide for Scrivener users.
Buy Now

Arachnea: What do you feel is your biggest success with Scrivener?

Keith: For myself, it’s having created a piece of software that I love using and that I use every day. It’s exactly the piece of software I wanted and I couldn’t image using anything else to write with. But there have been professional successes, too. We were hugely fortunate in the community that developed around Scrivener. We had a small Mac community following to begin with, who were absolutely fantastic and are still with us today. And as we entered the Windows market, we’ve also got a brilliant Windows community now, too. They told their friends about Scrivener, and that has led to professional authors and screenwriters using Scrivener. I never get tired of hearing about a book, film or TV program that has been written in Scrivener.

Arachnea: What would you like scrivener users and potential users to know about Scrivener?

Keith: It has a lot of features, but don’t let that daunt you. You don’t have to use them all - everyone works differently. Just start out by grasping the basics, which are really quite simple - you can work on individual sections separately or together, and view them no a corkboard or outliner as synopses that you assign. Learn how to use the split view, which allows you to view different documents alongside one another and also to view research alongside your writing (including images, PDF files, web pages and more). And then just use what you need, as you need it. Compile - the feature that allows you to export or print your work as a single text - can seem a little daunting at first, but if you’re in a rush, don’t worry, just export it using the basic settings and tidy up the draft in a word processor. You can always learn the full power of Compile - which allows you to push your work out in various different formats for self-publishing, to e-books, for editors - later, when you have time.

Arachnea: Do you foresee any software projects you’ll be involved with which are offshoots of Scrivener.

Keith: I have some ideas for a plot development tool that I’d quite like, something flexible and non-prescriptive useful for organising multiple plot-strands, but given the amount of work I’m doing towards the future of Scrivener right now, I’ve no idea when I’ll get chance to explore these ideas.

Arachnea: What is the primary / best selling point for Scrivener.

Keith: It was written by a writer (or at least an aspiring writer) for writers. Of course, we all have our own ways of navigating through writing a large text, and I wouldn’t pretend that Scrivener is for everyone. But well-known, published authors are using it, and if you are struggling to put together a long text, we have a thirty-day free trial available (which lasts thirty non-consecutive days, so there trial won’t end if you open it once and forget about it for a while). Also, it’s ace.

When using any new software, it's helpful to have some sort of guide available. My initial purchase of Scrivener included a tutorial for using it. Video tutorials are available on the Literature and Latte website. You'll find the same tutorials on YouTube.

There are other resources where you might find instruction for using Scriverner. The For-Dummies series includes the software in their lineup of user instruction guides. The previous mention regarding books on using Scrivener and this one by Gwen Hernandez are available on Barnds and Noble.

Though I did go through the tutorial that was included with my copy of the software, for my needs, I was able to figure out how to proceed rather quickly. So far, I've drafted several books with Scrivener (each is included in it's own file). I have a Scrivener file to which I sketch new all new ideas for stories. Once I start to work on a new idea, I create a file specifically for that project. Visit my article on Jacquo Lifestyle Magazine for tips on using Scrivener.

Scrivener For Dummies
An extensive guide for Scrivener users in the simplest of terms.
Buy Now