I love Disney's Tangled film about the lost Princess Rapunzel.

Tangled tells the tale of Rapunzel, stolen at birth, because of her healing gift, and raised by her kidnapper Mother Gothel. This animated movie follows Rapunzel, as she breaks rules and severs old ties, on the eve of her eighteenth birthday.

Tangled explores themes of identity, family, and truth. This animated movie is filled fun characters, action and romance. Explore the ins and outs of Walt Disney's Tangled on this page. Find the Tangled Contents below to begin exploring this Disney Princess' world.

Warning Spoiler Alert: This webpage contains spoilers to the Tangled Film. If you do not what to be spoiled please turn back now.

Tangled Trailer - See a glimpse of the Tangled Film

Have you and Rapunzel been properly introduced? Find out about Rapunzel's story in Disney's 5Oth animated film: Tangled.

Tangled (Four-Disc Combo: Blu-ray 3D / Blu-ray / DVD / Digital Copy)
Tangled tells the story of how Rapunzel became trapped in her tower and how she found the power to leave. Rapunzel coerces Flynn, by hiding the tiara he stole from the palace, into taking her to where the floating lights rise each year. As they make the journey to the lanterns, romance blossoms, and they find out how strong they actually are. The journey brings Rapunzel close to her own truth; about her "mother", her biological parents, and the tangled webs weaved with fear and lies. To order your copy of Tangled today click the image on the left.
Buy Now

Tangled makes my Top 10 Disney Movie List. Does it make yours?

Maximus is a white stallion that works security and defense for the palace. He pursues criminal and has a great sense of smell. Maximus can use his nose to capture the scent of his prey. He is relentless and will not give up on his mission even through breaking levies. He is loyal to his friends and has a heart of gold. He is a sucker for a pretty smile and a compliment.

Pascal is Rapunzel's side kick. He is very protective.Pascal watches over Rapunzel and encourages her to go beyond her borders. He is a chameleon (type of lizard) who blends into the background.

Rapunzel is a shut-in who hasn't left the confines of her tower for almost 18 years. She has been isolated and told she was could not survive in the big band outside world. Her hair is extremely long. It's golden and has the power to heal. When cut her hair loses it's golden glow and returns to her natural brunette color. She discovers that she can take care of herself and is able to make friends easily.

Flynn Ryder is really Eugene an orphan who steals to survive. He dreams of owning his own palace. He is witty and thinks on his feet. Eugene has a tough outer shell. It takes him a while to trust people. When he falls in love with Rapunzel he grows. He begins to care about someone other than himself.

Mother Gothel is the villain of the story. She kidnaps Rapunzel when she is a baby for her healing hair. She needs it to keep her young and pretty She locks Rapunzel into a tower and convinces her it is for her own good. She is vain, self serving, and cares more about her needs than anyone else. Though you cannot help feel that she may have loved Rapunzel in her own way. After all, she did spend almost 18 years raising Rapunzel as her own child.

Tangled Movie Question - Do you love the characters of Tangled?

Tangled is a great film in part because it has amazing and unique characters. A movie is as only as good as its characters. Tell me what you thought of Tangled's stars.

Which Tangled character do you love the most?

Rapunzel finds another use for the traditional frying pan when Flynn Ryder invades her tower.

Throughout the film Tangled the frying pan becomes the weapon of choice for bad guys and good guys alike. This weapon works so good that even the royal guards have adopted it in defense of the kingdom.

How to survive a battle with the use of a frying pan can be examined here with the study of Flynn and his frying pan technique. The frying pan is the instrument of champions. See the Tangled film clip below to see how a lowly frying pan makes an impact in a big way.

Disney's Tangled Double Trouble. Be Flynn Ryder or Rapunzel as you make your way through various locations. You begin as Flynn Ryder and you must collect his wanted posters while hiding from the Palace guards. This is a fun game that lets you participate in the fairy tale world of Tangled.

If Mother Gothel is the villain of our story how does she measure up to other Disney Villiains.

Who's your favorite Disney villain? 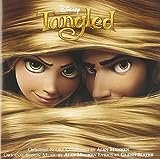 Tangled
The Tangled movie soundtrack features songs "When will my life begin", "Mother knows best" and "I've Got a Dream". If you are interested in purchasing the soundtrack or would like to listen to some song samples click the picture to the left.
Buy Now

See what your favorite characters are saying

Rapunzel: And who's that?

Flynn: Let's just assume for the moment that everyone in here doesn't like me!

Rapunzel: I have made the decision to trust you.

Flynn Rider: I didn't want to have to do this, but you leave me no choice. Here comes the smolder.

They Lived Happily Ever After - Tangled Film Concludes

So what happened to your favorite characters? Do you remember? Check out the list below of who had a happily ever after.

Tangled Fanfiction Sites - What fans would want to happen

You have come to the end of your Tangled exploration. Tell me what you thought of this page, the movie or it's characters.

Leave Your Tangled Thoughts - What do you think of the movie?