The Best of Sarah McLachlan

Sharon has a passion for reading non-fiction books and writing about what she learns from her research and her experiences.

Who is Sarah McLachlan?

Sarah McLachlan is a very prolific songwriter and performer from Halifax, Nova Scotia. Her talent was noticed very early in life when she was part of a band in high school at the tender age of 17.

Sarah could have been signed into a record deal right out of high school but her parents insisted that she graduate and complete at least one year at a college of design. But as soon as that requirement was met she was immediately signed and the rest is history. I still remember seeing her first video on MuchMusic (Canadian MTV) back in 1989. The song was "Vox" and I have been a fan of Sarah's ever since. Her music always tells a story and is so genuine and rich with emotion.

I bought the CD "Closer: The Best of Sarah McLachlan" at a concert I attended in Toronto in 2008. I rarely go to concerts but a couple of my friends mentioned it and I was in. It was a very intimate venue in a downtown hall with just Sarah and her piano. We had great seats and I sang along with each and every song. It was such a memorable evening! I bought the CD right after the concert and it has seen regular play in my car stereo for years now.

Sarah's music transcends all generations. My teenage daughters enjoy her music too. She is a genuine artist who writes all her own music. Sarah is that rare performer whose music sounds better live than it does recorded.

The "Closer" album features a compilation of some of her greatest hits. It also included two new tracks that I instantly loved.

Sarah McLachlan noticed the tendency for concert promoters to refuse to feature female performers in back to back performances so she started doing it herself!

She successfully toured with another singer, Paula Cole and named one of their concerts the "Lilith Fair". The concept was born. Sarah went on to organize the Lilith Fair tour during the summers of 1997 to 1999. The fair featured only female artists; either solo performers or female led bands. It was a huge success and proceeds of almost 10 million dollars made by the tour were donated to women's charities.

Where did she come up with the name "Lilith"? Apparently this was the name of Adam's first wife according to medieval legend. Now that's a whole other story.

On Stage at a Lilith Fair Concert

Sarah is the mother of two daughters born in 2002 and 2007. She was once married to her drummer Ashwin Sood who is the father of her children. Married in 1997 the relationship ended in ended in 2010. Sarah lost her mom to cancer in 2001 when she was pregnant with her first daughter.

Sarah's emotionally charged song style is fueled by the happenings in her life. She has dealt with difficulty in her relationships and the tragic loss of her mother at a time when she was also experiencing the joy of her first pregnancy.

I relate so much to her music because of this pure expression of emotion that we all commonly feel.

Closer: The Best Of Sarah McLachlan
I purchased this album after seeing Sarah in concert in Toronto in 2008. She was amazing on stage with just her piano. It was a great evening of music and every time I listen to this album I am taken back to that very intimate concert. A great memory.
Buy Now

Sarah's music is very meaningful with lyrics that move you emotionally. She is mostly known for her ballads but her music has been described as "folk-pop", "adult alternative" and "alternative rock and roll". I don't believe Sarah thought about what type of music genre she wanted to fit into she just writes and sings what is meaningful for her and it certainly strikes a chord with listeners.

Her songs are often influenced by real life stories she has read about or experienced herself. For example, she wrote "Angel" after a very hard tour when she was exhausted and was staying in a cottage to recuperate. She read an article about a member of the Smashing Pumpkins who overdosed in his hotel room during a tour. She understood how lonely and draining touring was and was tremendously affected by this news. Sarah also wrote "Hold On" after she was inspired by a documentary on a love story between a wife and her HIV infected husband who died in her arms.

Sarah feels deeply for people and situations and her outlet is to compose music that honours these emotions. Below is the early hit "Vox" from Sarah's first album, "Touch" 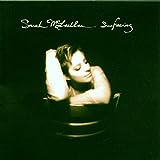 Surfacing
I also bought this album when it was released in 1997. It was made after Sarah went through a period where she thought she would never write music again. I guess you could say she was suffering from "music writers block". Hence the title "surfacing" she finally reached the surface after being submerged and unable to create.
Buy Now

This is one of my all time favourite songs; it often makes me cry and it doesn't matter how many times I have heard it. It was originally written to honour the death of a musician who died on tour of an overdose.

Sarah is now in her 50's and is producing her eighth album called "Shine On". In it she as in her usual style will sing about themes that will touch those who are dealing with issues such as divorce or aging parents. She sings to her long time fans who have followed her career since beginning when she was the tender age of just seventeen.

When asked about her past and all the things she has accomplished she remains humble. Sarah never planned her career she says, it was a journey that produced opportunities and she took advantage these opportunities. Sarah credits many people with her success. Currently, she is starting a tour that will see her open at the Orpheum Theatre in Vancouver a well known venue for Sarah that is essentially her "home base". The Orpheum was the setting for a few of her music videos. Sarah will tour North America to promote her new album.