The Secret World of Arrietty Comes to America: Movie Review

The Secret World of Arrietty: Updating the Classic Tale of ''The Borrowers''!

The classic story of ''The Borrowers,'' the little people who live beneath the floorboards who only take what they need to survive and things that won't be missed by a house's homeowners, becomes the tale of a young girl named Arrietty in this animated film. Created by Japan's Studio Ghibli and released in Japanese in 2010, the English-language version is distributed by Disney Movies. It was released in U.S. theaters in February 2012 and is now available on DVD and Blu-ray.

My daughter and I ignored a light snowfall to attend an advance screening in Philadelphia. Along with about 200 others, we saw a beautifully drawn movie about a young girl taking her first steps toward becoming an adult.

The Secret World of Arrietty Comes to Your Home!

''The World's a Dangerous Place for a Borrower''

The movie begins with the arrival of Shawn, a 12-year-old sickly boy, at the house where his mother grew up. In the garden he catches a glimpse of Arrietty, who we find out is now 14 and ready to leave her home beneath the floorboards for her first ''borrowing'' mission.

That night, Arrietty and her father climb through the walls of the house to the kitchen, where she is amazed at how big everything is. The film does a great job -- choosing angles and perspectives that really highlight how tiny and vulnerable the Borrowers are in the world of human beings (which they mispronounce as ''beans).

After the kitchen, the two sneak into the room where the boy is staying to steal a tissue. But he is awake, and speaks to her. The little people run away, but the contact sets in motion events that will force the Borrowers to decide that they need to find another home.

''The world's a dangerous place for a borrower,'' Arrietty's father warns. Never trust the ''beans.''

Arrietty, who has never known anybody other than her parents, and Shawn, whose parents are career-oriented and divorced, in their loneliness begin a series of contacts that will develop into a friendship. And when the home's housekeeper traps Arrietty's mother in a jar, Arrietty knows she must depend on her newfound friend.

The Heart of ''The Secret World of Arrietty''

The story moves along in a very straightforward way, with none of the fantastical elements associated with other Japanese anime (except, of course, for the existence of the Borrowers). Also, there's none of slick Disney touches like wisecracking or singing animals, and thank goodness for that. We never really get scared when the housekeeper calls the exterminators or when Arrietty's father is injured scouting out a new home. This is not that kind of action film.

Instead, the heart of the movie is the strength that begins to grow within Arrietty, as she learns that sometimes the bravest thing one can do is trust someone else. The friendship with Shawn is cemented in many ways during a very touching scene that is amazing in its deep impact. She opens up about her concern that her family may be the last of the Borrowers, as she has never met anyone else, and Shawn tells her he has a serious heart ailment and may not survive an operation that will take place in a few days.

I don't want to give away too much of what happens, but both become stronger for having known the other and the friendship helps them face their uncertain futures with bravery.

Not Your Typical Disney Movie

''The Secret World of Arrietty'' is an intelligent movie, focusing on real human emotions. And the Japanese filmmakers are willing to focus on true feelings without the need to sneak in wisecracking sidekicks or flatulence jokes in the insecure need to lighten up the mood.

Perhaps very young children will be disappointed by the film's lack of anthropomorphic animals, but keep in mind that this movie is only distributed by Disney. It most certainly isn't typical of the children's movies that Disney has put out recently.

This movie is well worth seeing, and I would give it four out of five stars. ''The Secret World of Arrietty'' is a solid, very entertaining movie.

Based on ''The Borrowers'' By Mary Norton

Winner of the 1952 Carnegie Medal

The movie is based on the juvenile fantasy novel ''The Borrowers,'' which has become a classic and spawned four sequels and several other movies. For more on the book, see this Wikipedia entry on "The Borrowers" . The book won the Carnegie Medal, which is the British book of the year award for children's and young adults.

My daughter warns that this is a very loosely based adaptation of the book. In the book, there are far more Borrowers living in the house, the father has a different personality and Arrietty doesn't get to do half the exciting things that she does in the movie.

Still, if your children like the movie it probably would help entice them into reading the books. And that would be a good thing.

''The Borrowers'' And its Sequels - Fun, Classic Stories

The Complete Adventures Of The Borrowers
Buy Now 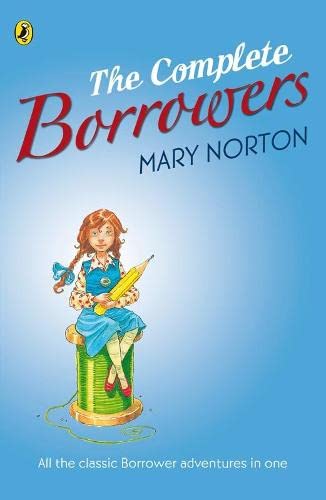 Studio Ghibli, the Japanese maker of ''The Secret World of Arrietty,'' was founded in 1985 and has released 18 feature films as well as music videos, shorts and commercials. For more information see: Studio Ghibli.

One interesting thing is that Studio Ghibli insists that international distributors cannot change the films that they license. I'm sure that ``no-cuts'' policy is why ''The Secret World of Arrietty'' hasn't been ''Disney-fied.''

I have seen two other Studio Ghibli movies: ''Spirited Away,'' which won an Academy Award as Best Animated Feature, and ''Howl's Moving Castle.'' They are very different from ''The Secret World of Arrietty'' but if you are interested in getting a taste of anime they would be a good start.

The Studio Ghibli films are available on Amazon.

Castle in the Sky
Buy Now

Disney's Official Website - Plus Reviews of the Japanese Version!

27 in. x 41 in.
Click Here for Information or to Buy at AllPosters.com

``Summertime'' From ``The Secret World of Arrietty'' - Bridgit Mendler Sings!

We received our tickets to the advanced screening to ''The Secret World of Arrietty'' after signing up at the Kotoricon anime festival, which took place in January 2012 in southern New Jersey.

At Kotoricon, my daughter had a great time hanging out with other fans of anime dressed as their favorite characters, and I enjoyed a very entertaining discussion about writing that was hosted by science fiction and fantasy writer C.J. Henderson.

Here are our reviews of the festival and of Henderson's talk.

Spider-Man, Captain America and the Avengers

While my daughter enjoys anime and manga, I grew up with the old-fashioned superheroes like Spider-Man, the Hulk, Superman and Batman.

Here are some of the reviews we have written about the comics of my youth.

To find out more about who we are and what we write about, please see here:

Thank you for stopping by and reading this lens. I hope you enjoyed it as much as we did writing it.

Here is your chance to speak up about the movie, this lens or anything else that we have discussed.

So please speak up now!