I had just started university when I first came across the Traveling Wilburys. I had just bought a copy of Roy Orbison's greatest hits and the insert contained a brief outline of his career and achievements. At the end, it mentioned him being a part of The Traveling Wilburys just before his death. I'd never heard of them at the time, but after looking them up and getting a copy of their album, I was glad to have discovered them. Considering how famous the separate members of the band are, I was surprised I hadn't come across them sooner.

The Traveling Wilburys consisted of Roy Orbison, George Harrison, Tom Petty, Bob Dylan and Jeff Lynne; serious music heavy-weights, and this shows in the consistent quality of their songs. The first track, 'Handle with Care' is a great twist on the usual love song. The lyrics are simple, but effective, the tune is catchy without being cheesy and, as to be expected, the vocals are great. 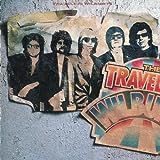 Other great songs on the album include 'Rattled', a traditional rock and roll song, featuring fantastic guitar riffs and lead vocals from the legend that is Roy Orbison; 'Last Night', a catchy tune about a meeting with a particularly beautiful, but dangerous, woman in a bar; and 'Heading for the Light', with lead vocals from George Harrison. I don't know much input Jeff Lynne had on this particular song, but it certainly has an ELO influence for me.

My other favourite song from the album is 'End of the Line', which sounds remarkably similar to the 'New Tricks' theme-tune. This song is particularly poignant as Roy Orbison died in between recording the lyrics and video for this track. As a tribute to him, the song's video features an empty chair containing Orbison's guitar, which is shown during Orbison's vocals.

The rest of the album is also good; there are no fillers to be found here. The one weakness for me perhaps is Dylan's vocals (I've never been a fan), but ignoring that, I can listen to this album repeatedly without tiring of it.

All in all, this is a fantastic album, and thoroughly recommended for anybody who likes any of the five featured artists.

Who's your favorite member of the Traveling Wilburys?