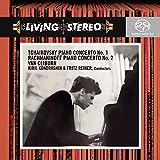 Van Cliburn first broke onto the music scene when he won the first Tchaikovsky Piano Competition in Moscow. He was ten years older than I, almost to the day, and by that time I was quite aware of his success at the time. I think he was the ONLY musician I ever had a real fan-crush on. I can't say I went crazy-wild about him, but I certainly took a special interest in him. I was absolutely thrilled he won the competition! The fact that he was also a Christian only added to my excitement!

Not long after that, word got around that he had bought a home in Tucson, Arizona, which was rumored to be located near the place I lived at the time. There was a beautiful large home not far from mine, on a big lot with lots of neat wild cactus, and I was absolutely sure this was where he lived. So one day a friend of mine and I walked over there. We couldn't see anybody. I also walked over and watched from time to time to see if I could catch a glimpse of him. I never saw anybody at all, near that house.

Some time later, I saw a picture of the scene out of his living room window. I saw quickly that his living room window view was of the city, obviously from somewhere in the foothills of the Catalina Mountains. Not close to me at all! Oh well! (Listen closely, and you can hear my laughter from where you sit.)

I think the major reason he appealed to me so much is because he had become what I hoped to become someday myself. The problem was, I could never have devoted myself to practicing 8 hours a day like you have to, in order to achieve that level of success. In retrospect, I also don't mind not having to deal with groupies, the grueling travel schedule, and just the general lifestyle of a performing artist.

Not too long after that, he suddenly disappeared from the public eye. The story as I understand it was that he didn't have a very large repertoire, and he went off to learn a lot of new music. And indeed, he did. He made a number of recordings after he returned to the public eye.

Here is an excellent article about him on Wikipedia: http://en.wikipedia.org/wiki/Van_Cliburn

"When it was time to announce a winner, the judges were obliged to ask permission of the Soviet leader Nikita Khrushchev to give first prize to an American. "Is he the best?" Khrushchev asked. "Then give him the prize!" Cliburn returned home to a ticker-tape parade in New York City, the only time the honor has been accorded a classical musician."

From this article, I learned something I never knew before. Apparently he played the Rachmaninoff 3rd Piano Concerto at that competition as well. That is said to be one of the most difficult piano concertos ever written. I have my own opinion about that. It doesn't sound appreciably more difficult than any of the other Rachmaninoff concertos. I have actually read Piano Concerto No. 2 (involving playing from the music, on the piano, very sloooowwwwly). And when I was in college, my piano professor assigned me the second movement, though I never really did much with it. I actually don't care for the 3rd as much as for the 2nd. In any case, the most difficult thing for me stems from the fact that Rachmaninoff had huge hands. This means that some of his chords (including the opening chords in the 2nd concerto), are greater than an octave, in this case, a 10th. And I can barely reach them, and certainly cannot play them with any authority. Some people play the bottom note as a grace note. I refuse to do that. It doesn't sound right.

Later, as he experienced prosperity. Van Cliburn established a foundation which now hosts its own piano competition. And the Russians have won at least once that I know about. Turn about is fair play!

This recording is of his performance of the Tchaikovsky 1st, recorded shortly after his triumph in Moscow, combined with a recording of the Rachmaninoff 2nd, which is undoubtedly my FAVORITE piano concerto ever, so it is certainly a favorite recording of mine, and I highly recommend it.

Van Cliburn has gone Home to be with the Lord. I miss him simply because I can imagine all the treasures he had yet to record, which I would have enjoyed immensely. I look forward to meeting him in person, something I was never able to do in this lifetime.

Are you familiar with Van Cliburn?