The first steps in negotiating the minefield of baby weaning

The subject of weaning seems to produce a lot of conflicting advice, parent competitiveness and general fear and loathing. What starts off as excitement about baby's first slurps can very often descend into panic, frustration and upset. Weaning isn't rocket science - and certainly isn't an exact science - yet it can easily become over-complicated and a chore. However, it doesn't have to be like that. Yes, in the initial stages you will need to do extra work if you have decided to boycott all pre-prepared baby food but you can quickly progress to a stage where a large proportion of what you make for the rest of the family can be used for your little one (omitting salt and very strong spices).

Aside from when to start (which is generally advised to be from six months WHO recommendation), one of the first weaning issues seems to be the apparent pressure to decide what 'style' of weaning you will use: baby-led versus traditional spoon-feeding. Finger foods allow babies to self-feed and stimulates their interest in food (and most babies seem to enjoy), but spoon-fed purees give a much better idea of how much they've eaten and therefore provide greater parental control. It's almost as if the style you choose defines what kind of parent you are. Nobody really seems to talk about a combination - or a composite - approach, which blends the two styles and takes inspiration from different sources. However, it's easy to combine them for a flexible and common sense approach to weaning.

Again, no discussion of a combination approach

With a number of pros and cons for each method, a composite approach makes sense.

In the beginning, one 'meal' a day - a couple of spoons - is fine. The aim is to introduce the concept of food; different flavours and textures. At this early stage the actual nutritional value is secondary (obviously this isn't carte blanche to introduce things that are actually bad for your baby!) as your little one's nutritional needs will be predominantly satisfied by their milk feeds.

Baby rice on its own is bland but is a good starting point nonetheless; progressing pretty quickly and combining it with steamed fruits for a breakfast and using it to bulk up vegetable purees will probably do your baby a lot of favours and within a few weeks it will probably have served its purpose. Don't be afraid to move fast and up 'meals' to three a day if your baby enjoys it. Don't worry, in the early stages this won't affect their milk intake, this will only properly start to decrease when proteins are introduced. Trust your instincts, if they're a little unsure then stick to one meal of a couple of spoons a day for a while. However, if your little one is enjoying baby rice and steamed fruit and simple vegetable purees then give them as much as they want.

Once you're properly up and running, introduce lumpier textures, replace the baby rice - which you may have been giving at breakfast - with a baby cereal or a low salt and sugar 'adult' porridge or wheat cereal; mash vegetables instead of pureeing or give them as finger foods.

Also there is nothing wrong with using frozen vegetables to supplement fresh fruit and veg. In the case of things such as peas, the frozen variety can often surpass the fresh as they are frozen within a couple of hours of being picked so very few nutrients are lost.

Read my 10 useful facts I gleaned from weaning.

Next couple of weeks

Then the real fun starts and you can start introducing proteins and more complex combinations as well as adapt your family favourites. 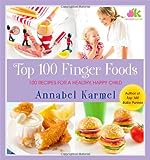 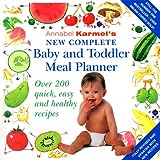