Activities for kids; Construction of a park using pre-punched pieces

Radhika's hobbies include making art & crafts in which she is highly fond of doing fabric painting.Her kid is also an art&crafts enthusiast.

Activity of building blocks has always been the doorsteps to improve observation and creativity among children. But innovative art and crafts have replaced them with a different approach for building the same. While searching for some medium for building a park for my seven years old kid, I came across Navneet Publications (India) Limited’s series of Model Construction.

How to build the park

Navneet Publications (India) Ltd., a dominant player in educational & office stationery products, has organized this activity series to enhance creativity and team work in an interactive manner among children of 5-8 years of age. It is a book consisting of several pre-punched pieces instead of blocks that has been designed specifically for constructing various models such as a park, little house, farmhouse and a circus show. The model is shown on the cover page of the book with various elements constituting it. These elements are constructed first using the pre-punched pieces that bear the same number as in the model. Then by placing these elements creatively, the kid can build a park of his own imagination with lots of fun.

Even if the pieces depict the structure of the elements very well, the kid needs the help of elders while assembling them. Simple basic elements in a park such as kids playing, ice-cream vendor are easy to build with just two pieces. But constructing the main components that make a park such as slide, swing, fountain, benches with kids require more attention and patience. By following the arrows on the pieces, you can proceed by pushing the tags into the slits.

Building blocks activity is a great way to keep your child occupied. They are also one of the best toys for developing eye-hand coordination. Children may love to build blocks in groups. This helps in developing their social behavior too.

A kid's activity of making a bottle rocket 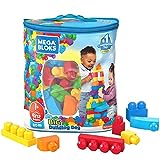