An Increasing Trend in the Diagnosis of ADHD in Children?

There seems to be an increasing trend towards diagnosing ADHD in children.

Only a few days ago researchers from the Centers for Disease Control and Prevention reported that the number of children allegedly afflicted with this disorder has risen to 1 in 10. The main debate seems to be whether this is an increase in prevalence or an increase in diagnosis.

Reasons for the Apparent Increase in Diagnosis

It was suggested that there may be many reasons for the apparent increases in ADHD, not least of which is our expectation that all children must sit still and pay attention and any of them that don't must have some kind of issue.

Poverty also seems to be an indicator.

One other factor noted was that the East of the US seems to be more affected that the west. There is no known reason for this. Some people have suggested that EMFs or electromagnetic fields may have some effect on the prevalence of ADHD and I was interested to see the population distribution in the US as shown in the photo below...maybe a higher population density could have an influence on the amount of EMR (electromagnetic radiation) that we are exposed to. PLEASE NOTE: this is pure speculation on my part!!

The concern with way of diagnosing ADHD is that the patient must show several symptoms from a list that includes, inattention, disorganized behaviour and aggression. See the link below for a full list from the Mayo clinic.

As you can see many of the items on the list could also be attributed to other disorders or even to a normal kid having a bad day!

Because there is such a broad range of symptoms and not all of them are required for a diagnosis then it is difficult to be absolutely certain of a diagnosis.

There have been studies that suggest a genetic link to ADHD symptoms. However there are not single genes that are involved and it is not likely that it will ever be possible to develop a definitive genetic test even if this was an acceptable option.

More recently researchers have developed other ways of determining whether a child is really suffering from ADHD that is severe enough to warrant medical intervention. This gives the opportunity for children to be correctly diagnosed and only given treatment if it's really required. For more information take a look at the videos below:

Often stimulant drugs are used fairly successfully to treat ADHD e.g., methylphenidate (Ritalin), dextroamphetamine (Dexedrine), and magnesium pemoline (Cylert). These drugs have found to provide some relief for about 75% of children and adults with ADD.

Low doses of antidepressants have also been used as a successful treatment.

Although these drug treatments are successful patient are often reluctant to take them.

There is great value in maintaining routine and providing a sense of safety and security.

Acceptance is something that is very valuable to anyone with mental challenges..and let's face it that includes many of us!

This link is an interesting article on acceptance from ADHDCentral.

Social support is also invaluable to those with ADHD and their carers.

Here's another link to the ADDer World social networking site for adult ADDers. 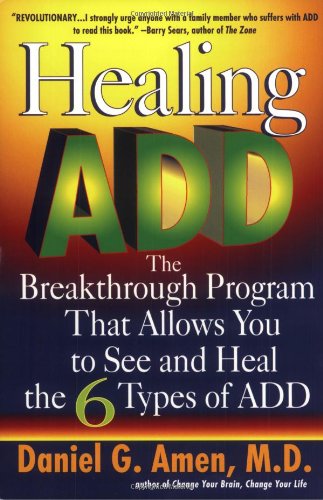 Healing ADD: The Breakthrough Program That Allows You to See and Heal the 6 Types of ADD
Buy Now

It will be interesting to see what kind of progress is made in research into this disorder in the future and whether the current trend can actually be eventually reversed.