What's the Best All In One Cloth Diaper for Babies?

The Cost of Disposable Diapers

Once considered messy, time-consuming, and too much work, today cloth diapering is gaining popularity with parents who want to avoid the cost of using disposable diapers, as well as amongst those who want to minimize the environmental impact of diapering their babies. According to babycenter.ca and Consumer Reports, using disposable diapers and baby wipes can cost upwards of $884 per year...and if your child is in diapers for the three years the cost would be about $2600 or more per child!

In addition to the monetary cost, the environmental impact of using disposable diapers is staggering. Ottawa Cloth Diapers states that one child in disposable diapers for three years creates 3 tonnes of garbage which can take up to 500 years to decompose. While figures vary, an average baby will need it's diaper changed approximately 6000 times prior to being toilet trained. 6000 soiled diapers per baby is an awful lot of garbage, not to mention the number of trees that are cut down in order to make the diapers. The high monetary and environmental costs are two reasons that many parents are choosing cloth diapers.

Using cloth diapers (or cloth nappies, as my grandmothers call them) for your baby has never been easier and the options of types of reusable diapers has never been greater. The traditional flat flannel squares, diaper pins, and soaker pants that our grandmothers used are your most economical option, while the latest AIO (All-in-one) fitted cloth diapers with sturdy velcro closures, gathered leg openings and breathable covers are definitely the easiest to use. Prefold diapers with diaper covers fall somewhere in the middle in terms of the cost and convenience of cloth diapering your baby.

How Much do Cloth Diapers Cost?

A quick calculation will show you that even if you use the most expensive cloth option, at $700 you will still save $1900 per child that can be used to pay down debt or to build their education savings plan.

The best cloth All-In-One Diaper that I have used for my children were bought on eBay and are made by Kidalog, an award-winning Canadian family owned business based in Camrose, Alberta.

Operating since 1986, Kidalog has both a bricks-and-mortar store as well as a very comprehensive online site (and they ship diapers worldwide) detailing all of their different baby cloth diaper styles and accessories - everything from diaper pails to biodegradable flushable diaper liners, to baby change pads.

I am very pleased with both styles of the Kidalog cloth diapers we purchased. The one size option works well and is a moneysaver. For our newborn, I used the Baby Softwear All-In-One with Breathable Built In Cover Cloth Diaper, which has 3 different velcro strips to choose from for fastening (by folding down the back of the diaper you can adjust the size as your baby grows). These diapers have four layers of flannel on the cloth diaper, plus a four layer pad built in and attached to the back of the diaper. As my baby is a heavy wetter I add an additional extra absorbency pad at night, which gives another four layers of protection.

Update: July 2014 - since writing this almost four years ago we have had another baby who is also using the same diapers...still going strong!

While the BabyLove All-In-One with Breathable Built In Cover Cloth Diaper is advertised as being One Size and suitable for babies from 8 pounds to 35 pounds, I found that the leg openings were just too large for the slim thighs of my baby, despite following the video instructions for folding and adjust the cloth diaper for a newborn. However, once she reached four months, her little legs plumped out and the BabyLove AIO fitted very well. Both styles of Kidalog fitted AIO cloth diapers are very trim, and not as bulky as the first fitted cloth diapers I used years ago with my older children. They also dry faster as the extra pad is attached at the back only, and the BabyLove has an extra-long pad which can be double or triple folded when baby is placed in it for even more absorbency.

Now that the baby has been introduced to solid foods, the flushable diaper liners make using cloth baby diapers very easy. I prefer to flush baby poop down the toilet than to have a soiled disposable diaper sitting in our garbage pail for two weeks, especially in the hot summer months. One of my favourite features of the all-in-one cloth diaper is the breathable cover - it is amazing to me that there is no leaking or dampness, and it is much easier to have to fasten on than to have to fiddle with diaper pins, separate diaper covers, etc. 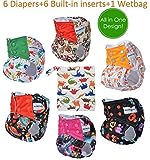 How Should I Wash My AIO Cloth Diapers?

The Cloth Diapers We Bought

The cloth diapers we bought from Kidalog included the following:

My husband bought these in three separate lots on auction on eBay. Our total cost was $527.00. I believe that the savings were due to the fact that these were groups of different "leftover" colours. You can buy full layettes directly from the manufacturer's site. We also bought a diaper paid with a lid for $8.00 from Once Upon a Child, which is a chain of used clothing stores and a great place for parents to save money!

Other Hubs on Cloth Diapering

Canadian Made Cloth Diapers on the Web