When the cemetery was founded in 1849, Carrollton was its own township and not the New Orleans city neighborhood that it is today. Having a burial ground to could their own was a cause for celebration and pride- families had their dead exhumed and reburied in their new, local graveyard. Beautification projects sprung up - trees and flowers were planted while the oldest local families claimed their plots and made plans for tombs their descendants would be able to use for generations to come.

In New Orleans it was traditional to bury all Catholics in the same holy ground, regardless of color or nationality but the suburb of Carrollton adhered to the more American view. They designated the majority of the site for whites, a portion for people of color.

The spot the town chose was quite high by local standards- it was actually possible to bury below ground. Most families chose to build traditional tombs, but the working minorities couldn't afford that expense, so their area turned into a potter's field. Their loved ones were interred in the ground and memorialized with personal, hand made markers on ground that was used over and over through the years.

As it was in 1876, so it is today: the cemetery is in very poor condition- most families have moved away or died out, and many of the tombs are collapsing in on themselves. The grass is often overgrown and choked with weeds despite the caretaker's office on site. The last time a major improvement project was undertaken here was in 1969, when drainage was improved and the aisles were paved over with cement.

Ironically, it is the pauper's field that is the best cared for- maintained by local families and shown a kind of tenderness that their richer neighbors have long since lost. 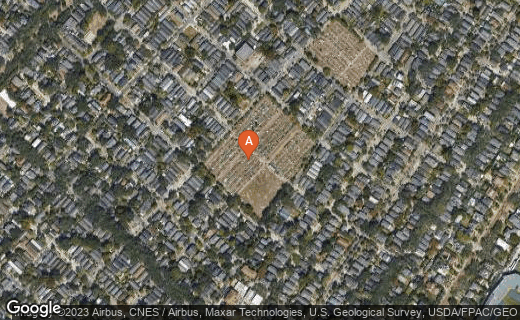