Music for Kids That Adults Love Too!

Preparing to teach children's art classes, I needed new music. There are long windows of time in art class, where children are busy working and not talking, which is a perfect opportunity to play some cool tunes.

On my last visit to New York City, I was on a quest for music that wouldn't drive me nuts to have to listen to again and again and again. I was desperate to find the likes of Kaptain Kangaroo or Vintage School House Rocks - even the Muppets were fun.

Luckily, I met up with some hip young moms in New York City and they turned me on to the new music scene for kids. Our favorite artists that we listened to throughout high school and college - now record for kids of their fans. Very exciting! VERY EXCITING!

Here are some of my favorites, including one musician that isn't yet on the "scene", but is more grassroots. His name is, Bradley Dean Whyte. What he lacks not being on a major label, he makes up for with the fact that he has had more contact and direct experience with children in school systems than most other musical artists combined.

I'll start with him, because he was the word on the street during my stay in NYC. Moms (and dads), kept chanting the name, "Mister Bradley, Mister Bradley "...They loved him. More importantly, the children loved him. He was the pied piper of New York City. When I met up with him, he was teaching at six different locations of Pre-School of America, entertaining children at the Reebok Sports Club, catering to a dozen kids for private music lessons and it seemed like he was moonlighting a handful of birthday parties a week! Everyone seemed to know him personally and the kids adored him. I was lucky enough to sit in on one of his classes and I wanted to be five years old again . I wanted to sing-a-long and dance in a circle, reaching up high and down low. And, actually - I did ! He is cool. And, he is super funny.

Through the grapevine, I found out he had recorded 2 albums of children's music. One is the sing-a-long album "Mister Bradley's Musical Jam! " it is very eclectic and satisfies my need for the old School House Rocks! genre of music.

And, his lullaby CD, "Mister Bradley Kosmic Lullabies " sounds moog and retro - a child friendly "A Clockwork Orange " meets beautiful symphonic music. A couple of friends of mine who are yogi's play it during their yoga classes, and many parents listen to it while they drive.

At the time of writing this, it wasn't up on itunes or Amazon, instead, he has his own website which you can contact him directly through. The "Mister Bradley's Musical Jam " is on the website for a free download with a suggested donation of $6.00 through PayPal, and to purchase the lullaby CD, contact him directly at his e-mail: bradblanco@gmail.com:

It's also good to note, that he's an amazing rock musician, and as I'm writing this, he has a free download of his last record, "Geography of Hungry Ghosts",which is on his other website. While it isn't for kids, it sure is a great album for road trips!

Next on the list, Laurie Berkner. She's been around for a while now and is going strong in NYC. She's got great tunes that help kids learn the basics, like sitting down while they eat. My favorite all time song of hers so far, is "Monster Boogie", though, "Buzz Buzz" is pretty catchy too. Its as if she took really fun and cool pop/folk music and put memorable kids lyrics to it. I have listed 3 of her albums below. She's quite prolific. If you're in NYC, she oftentimes gives free concerts. They'll be listed on her website under her name. She's the only musician that I'm listing that doesn't make music specifically for adults (yet). But, no worries - she's obviously quite amazing with the children's stuff. I'd be happy if she just kept doing what she's doing.

Now, I want to talk about They Might Be Giants (album "NO!"). I LOVED this band when I was in high school and college. They're totally funky and weird. Their kids album is no exception. It actually sounds like something I may have listened to in high school, oddly enough. They're the same loveable band, but now with songs on counting and other basics. The tunes are fun and easy to listen to repeatedly. I just read that they won a Grammy for their children's album. And, it's a great subliminal way to get kids early on to commit to liking cool music!! Their album "Here Comes Science " is amazing for elementary school kids.

Barenaked Ladies (album "Snack Time!") are awesome. They just are. Their children's album is so much fun that I've played songs from it at parties. I've actually emailed links to a couple of them to friends. Their version of the alphabet song is so hilarious and strange, its hard not to want to play it again and again while learning the lyrics. It may actually be one of my all time favorite kid's songs.

Then, there's Jack Johnson (album "Curious George Soundtrack"). Who doesn't enjoy his music? His music is best listened to on a lazy Sunday afternoon during a long brunch, with the door open and the fresh spring air flowing through the old wooden house. Or, on a road trip sing-a-long. He's got a great voice and for cryin' out loud - its from the soundtrack to Curious George ! I love Curious George . This is a thumbs up. And, don't be surprised if your driving in your car and choose this CD over one of his more adult ones. It's pretty darn good.

And, finally, there is the album "For The Kids", each song performed by amazing rock n' rollers! It was such an exciting find. Some of the recording artists you'll hear on this album are, Sarah McLachlan, Dan Zanes, Five For Fighting, Billy Bragg & Wilco, and Tom Waits. Apparently, they all pulled their talents together through the VH1 Save the Music Foundation and a portion of the proceeds of this album will help restore music education in the U.S. public school system. (If only we could do the same with visual arts!). Not only is this album for a good cause in the school system, its also a good cause for having awesome kid's music.

This list has saved me from the nightmare of having to spend time with Barney and Raffi. I share it with all moms, dads, babysitters, siblings, teachers, friends of friends that have children, doctor's offices, after school play areas, play groups, birthday parties and anywhere else young ears need to be primed to listen to good music! Enjoy and keep supporting these and other similar artists trying make life for you, me, future baby musicians and all families more pleasurable. 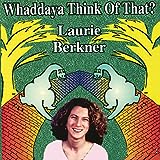