Common weaning and feeding problems and ways to resolve them

You've bought the right high chairs, all the cups, spoons, tubs, bowls and bibs; and your baby really seems to be enjoying solids. Then it all goes wrong.

Even if weaning has been going well from the start, a number of problems can rear their ugly heads at any point. A very common one is that your once fantastic eater suddenly becomes fussy or point blank refuses most of the foods that they previously enjoyed. Rest assured, this is normal and is often linked to your child's growing independence. Until now, they've had relatively little control over their daily routine. However, food is one way that they can exert their independence; and often do!

The main thing to remember is to try not to panic even when you know that your child has eaten very little. This can be easier said than done. However, one thing that can help is to think more in terms of what they've eaten over a week as opposed to getting hung up on individual meals or even days.

If breakfast is something that they enjoy, there's no harm in giving breakfast type foods as an evening meal. It's better to have repetition (of good foods) than nothing at all. Almost always, these issues resolve themselves, but in the meantime you need a few tactics up your sleeve.

Finger foods are often a good way to negotiate it. Dried fruits such as apricots and raisins are often appealing as are grissini (bread sticks) and fromage frais for children. Babies are a very different proposition to toddlers - if a toddler refuses food that you know they like I wouldn't advocate offering lots of things. I would however, advocate withholding 'treats' such as dessert. In the earlier stages of weaning, I would personally recommend trying a few things in the fussier phases, but keep returning to the foods that they previously enjoyed but recently rejected. 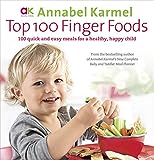 One of my children went through a month-long period of refusing anything off a spoon unless it was her favourite wheat breakfast cereal - for that she would make an exception. Then, just as suddenly as the phase started it ended. It did stress me out for a time, especially as her twin sister had no such qualms and was eating like a trooper; the comparison was not good and made me fret even more. However, after several days of getting into a state I decided this was not helping matters. My baby was absolutely fine, wasn't wasting away and would eat with a few modifications.

Firstly, she would eat breakfast from a spoon so I just made sure that, that breakfast was very hearty. I then discovered that the same things that she refused from a spoon when offered to her on a piece of crusty bread were fine. I don't think she could have been eating as much as her sister, but the main thing was she was now eating a variety of different things again, just off a piece of bread instead. Also, this was where finger foods came into their own as, again, these were fair game. Homemade pizza and big pieces of pasta were other winners. All along I kept offering her the spoon. She kept on refusing and then suddenly one day decided it was fine again. She had obviously made her point!

Obviously it's great if your baby wants to feed herself, and this is something that you are striving towards and will free up a lot of your time. However, in the earlier stages when their hand eye co-ordination isn't honed and their fine motor skills aren't great this can often mean very little food actually makes it into their mouth. You don't want to discourage them from self-feeding but at the same time you do want them to have some food. Sounds obvious, but the best way around this is an additional spoon - or sometimes even two extra spoons - for them to hold and feed themselves whilst you get them to eat the majority of their food. Another way is for them to have finger foods and when they're having a rest spoon in the other part of the meal. Hopefully then everyone is happy.

Problem four - eating out or on the go

This is where a composite approach is ideal. There is no need to take out stuff that needs extra preparation on arrival and requires heating up. Many venues won't heat up food in a microwave or provide boiling hot water in a bowl due to health and safety issues. Therefore if you're not giving your child jar food or food pouches such as Ella's Kitchen, and they're not quite ready for the children's menu in a restaurant you need to do something else. If I'm eating at a cafe I take a back up of rice cakes, cherry tomatoes, fruit etc to supplement menu items such as sandwiches and paninis (which seem to go down well). For longer car journeys - when you don't know what might be available en route - things like leftover chicken cut into strips, cooked and cooled omelette; and pre-streamed and cooled veg such as mange tout, tenderstem broccoli, green beans and carrots are ideal - as are things like cubes of cheese and dried fruit. Another winner with children from about six-and-a-half months onwards is ripe, ready-to-eat avocado, which is both easy and nutritious. You can just cut it open when required and literally spoon-feed it direct, cut it into pieces for them to hold or even take inspiration from Annabel Karmel and mash it with some banana and natural greek yoghurt. Obviously, a cool bag is an advisable piece of kit.

Fish that isn't direct from the Captain's table is often a hard sell. Aside from homemade goujons of fish, which are great, I find that fish such as salmon that's baked in tin foil in the oven with shallots, plenty of butter and lemon juice (so that it is very moist) is one of the better bets as is kedgeree or any fish dish that has a creaminess about it; think milk poaching. Natural greek yoghurt appears to be a secret weapon which makes lots of potential misses hits. If whipped into mashed cooked fish it almost makes a chunky pate which seems to go down very well and can even be fed with bread.