How I Weaned Off Breastmilk

I am a mom, nurse, military spouse and blogger. I write about my experience being a new mom, DIY crafts, and recipes.

When I was pregnant, I made the decision that I wanted to breastfeed and I was very determined to do it. It was very hard in the beginning, the first three weeks specifically. I really wanted to quit but I knew all the benefits and I really wanted to give it a fair chance. After my first month it became so much easier, and I loved the bonding time with my son.

When I Had to Stop

Then my gallbladder started acting up again and I ended up needing surgery. The recovery was a bit difficult on me and all of a sudden my son seemed hungry all the time. I'm a stay at home mom (for the most part) so I don't generally pump (other than in the morning to build up my freezer supply). I assumed he was going through a growth spurt but the amount I was pumping in the morning was decreasing. So I increased the amount of feedings, I started taking brewers yeast and every other lactation supplement I could find, I even tried heat. When I went to work, I realized I was producing only about 2 oz every 2-3 hours. No wonder my baby was so hungry- he was almost 4 months old at the time! Nothing I did worked, and the more I failed, the more depressed and stressed out I was becoming. It was time to consider formula.

How long did you breastfeed?

As much as I hated the fact that I had to switch to formula before at LEAST 6 months (which was the original plan), he is much happier and he is maintaining his weight curve. He even spits up less. I do plan on breastfeeding again when we have another baby, and hopefully I will be able to do it for a longer period of time, but as for my son- I just want him to be healthy and happy. 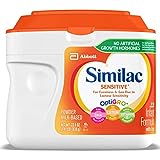 Every baby is different but we use Similac Senstive and Dr.Brown bottles for our son. He spits up less than he did when he was breastfeeding and also seems to have fewer tummy aches. We no longer have to use gripe water or gas drops.