How to Recognize Early Warning Signs of Learning Disabilities

Learning disabilities, also known as learning differences or LD, are rooted in a person’s neurology. Although most LDs are diagnosed after a year or two of school, some signs indicate this type of wiring early on.

It’s important to know about what can contribute to having a learning difference. Although there’s no definitive cause behind why some kids have LDs and why others don’t, some factors that make it more likely.

Most learning differences run in families. For example, my dad, grandmother and youngest sister all have dyslexia, just like I do. This applies to a wide variety of other learning problems in other families as well.

This includes things like poor prenatal medical care, maternal drug abuse or if the mother is malnourished while she’s pregnant. It’s possible that these factors could influence the fetus’s developing brain just enough to alter how the eventual child will perceive the world and process information.

Even if the baby seems healthy despite the trauma or heals quickly, its delicate brain may develop differently than the majority as a result.

Toxic Types of Mold and Lead

Early exposure to these contaminants could make a child very ill and have lasting effects on how their brain functions. Free lead screenings are available through most counties, and if you suspect mold growth in your home, get it checked out as soon as possible.

One of the many problems that can result from being subjected to injury or neglect is the invisible damage done to the brain.

I’ve seen here and there that poverty is listed as a cause of learning disabilities as well. I don’t believe that poverty itself is an actual cause; so much as something that makes things like poor nutrition, lack of medical care, or exposure to harmful substances more likely. It’s also a contributing factor to lack of educational resources.

However, low income does not necessitate these problems when the family is able to provide adequate care to mom while she’s pregnant and after the baby is born.

The most important thing to remember when watching for signs of LD is that there is a range of normal development when it comes to the stages of a child’s growth. Pediatricians can educate you about when these benchmarks should be reached, plus there are multiple online sources that can help you out.

Many of these indicators may seem troubling, even when they fall into the normal range.

Delays in Pulling Up, Standing and Walking

Provided there’s nothing physically wrong with you’re child’s feet, ankles, legs or back, this delay indicates a problem with their large muscle control, or gross motor control. This is a red flag because many LD children have problems with sports later on in life because of this difficulty.

If the child has problems gripping or grabbing things, this may be an indication of a problem with fine motor control. This is another common problem that kids with LD deal with. Later on, it’ll be difficult to teach them how to hold a pencil properly, which adds to the difficulty in learning how to write.

There are many things that can cause delayed speech. For some kids, it’s a problem with differentiating different sounds, so they can’t duplicate them like other children. For others, it has to do with short term or working memory. The memory problem manifests in the form of being unable to remember what sounds are long enough to generate them.

If your child is slower with solving problems that a child in their age group should be able to complete, that doesn’t mean they’re less intelligent than other kids. This could be another way of finding out if there’s something going on with their sensory perception and memory.

There’s a broad range of how long it takes some kids to reach emotional maturity and learn how to interact appropriately with others. Many things can cause this from inability to recognize the meanings behind facial expressions to difficulty filtering surrounding noise, sensation or things in their field of vision.

Problems With Rhyming or Word Recall

One of the most fun games to play with a kid to increase their vocabulary is the rhyming game. If they have problems with these sorts of games, it could indicate poor working memory or an auditory processing problem.

Although many LD kids experience one or more of the above delays, not all of them do. Sometimes, blatant signs don’t become obvious until they enter a schooling environment. These are some signs to watch for in the early years.

Again, some of these issues are normal for a period of time.

If the child holds their pencil awkwardly and eventually holds it in a fist instead of a normal posture long after the other kids have mastered the skill, it may indicate problems with fine motor control.

Can’t Cut In a Straight Line

This could also be because of poor fine motor control, but it could also have to do with how they perceive the line. The cut won't be straight if the guide doesn’t seem to stay straight or intact for them.

Often, as shown in the video, occupational therapy is used to help children past these issues.

This is an extension of the problem of poor gross muscle control, or issues with sensory perception. Often, kids with LD have problems differentiating important noises from background sounds or don’t register everything visually that they need to.

Lack of Letter Connection to Sounds

This could be a reading disorder in the making or a signal of auditory sensory problem. This later leads to a deep insecurity about reading aloud.

When they’re writing, constant letter reversal can indicate dyslexia. Often, these kids also spell very creatively, and may misspell the same word in numerous ways throughout the whole document.

Similarly, if they can’t read at the grade level they’re in, this is a red flag that there’s an issue, whether it has to do with how they process information or if there’s something wrong with their vision.

This could seem like a sign of willfulness, but if the child’s short term memory is at fault, they may have problems remembering the sequence of events or the instructions being delivered early on.

Many LDs manifest in the realm of communication. If a child can’t decipher what others are saying, their auditory processing might be to blame. Similarly, eye contact and the like can be difficult to master.

What to Do If You Suspect a Problem

If your child demonstrates these issues, keep a journal of their problems and samples of their school work. Also, write down any questions you have and keep a file of paperwork.

Once you’re ready, contact your child’s school to speak with their teachers about getting them evaluated for learning disabilities. If your child is enrolled in a public school, the school must pay for testing, and eventually, the IEP.

If you suspect the problem may be visual, talk to your pediatrician about possibilities. Show them the child’s work as well to see what kind of input they might have.

The earlier you can get your child help, the more likely they are to succeed in school. In fact, the National Institutes of Health states that 67% of kids at risk for learning problems consistently performed at an average or above average level when intervention was early.

While some of these signals are normal parts of a child’s development, if they’re severe enough, it may be worth checking out options for early intervention.

The Dyslexic Advantage: Unlocking the Hidden Potential of the Dyslexic Brain
This is an amazing book which highlights the strengths of dyslexia, and offers ways to work on weaknesses using that knowledge. It changed my life for the better.
Buy Now 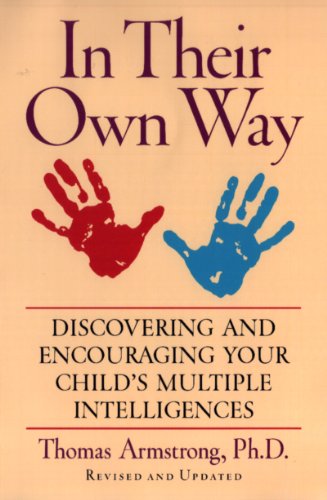 In Their Own Way: Discovering and Encouraging Your Child's Multiple Intelligences
This book highlights the method of teaching to a child's unique intelligence.
Buy Now