Is Your Child an Indigo?

According to the Indigo Children website, Indigos can be identified by the following traits (paraphrased):

If you've been in a bookstore or surfed the web for parenting resources recently, you've likely come across the concept of Indigo Kids. What are Indigo children? This is what I found.

What is Meant by Indigo Child?

According to many, there are new souls among us whose job it is to facilitate a transition to the next stage in the evolution of human consciousness. There's a mouthful. I'm not exactly sure what that means, but suffice it to say that Indigo Kids are special. They have unique talents and abilities that none of us mere mortals seem to understand. Some of the attributes are similar to those of children labeled as gifted.

Indigo Kids are said to be highly sensitive and multidimensional. They are thought to have many talents and even advanced intuitive powers. People who embrace this idea believe that the next generation of children is markedly different from us, as if they are born knowing.

It's not clear to me whether the idea of Indigo children applies to all children or only a select few. The general idea seems to be that children possess a certain wisdom that we adults have lost and we need to honor them and learn from them.

Do Indigos live among us? Who knows? If the idea gets people to treat children with respect - great. If it's just another way to spoil our kids rotten and shirk our parental responsibilities, I'll have none of it.

What color is your child?

According to the Skeptic's Dictionary, the term Indigo Child was derived from psychic and synesthete Nancy Ann Tappe's work classifying people's personalities by the color of their auras. Indigo children have indigo colored auras. However, the Indigo Children website states:

"...just in case you heard otherwise from other "indigo" sources, the designated word "Indigo" has nothing to do with the color of an aura! It is the result of scientific observations by a woman who has the brain disorder called synesthesia"

In the book, The Indigo Children, many authors put forward the idea that many children diagnosed with attention deficit disorder (ADD) or attention deficit hyperactivity disorder (ADHD) are actually Indigo children, needing special care and training instead of drugs like Ritalin. Faced with the choice of how to view your children, would you rather believe they are special and chosen for some high mission or that they have a problem?

It's an interesting viewpoint and I look forward to learning more. Please let us all know any resources you know of in the comments. 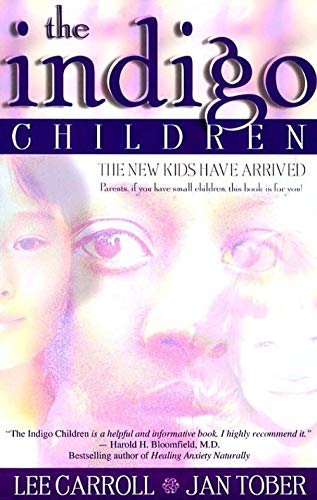 The Indigo Children: The New Kids Have Arrived
Buy Now