Tips To Help Your Child Learn A Second Language

What are the Benefits of Learning a Second Language at a Young Age?

So what are the benefits of introducing your child to a second language whilst they are young? There's been a lot of research done in this area and the results are overwhelmingly positive. Learning a second or even third language whilst young will have a very positive outcome for your child. Here are just some of the ways that your child will benefit:-

In the early years, the brain is wired up to absorb foreign languages more easily. The younger the child is introduced to a new language, the more likely it is that native-like pronunciation will be achieved. This ability stays with them until the onset of adolescence when physiological changes occurring in the brain, make it harder to learn a second language.

Children who acquire a second language in the early years find it easier to learn other languages later on. There is much debate as to why this is, but research consistently shows that bilingual children acquire a third and even fourth language more successfully, even when they are older.

Bilingual children score more highly in math, verbal reasoning and logic tests. They tend to be successful learners and high academic achievers and often outperform their monolingual peers. I have seen this first hand when attending the prize giving at my daughter's high school. A large percentage of the academic awards are won by the bilingual pupils - far greater than the percentage this group of pupils represents as a whole within the school. One of the reasons for this academic success is because bilingual children have developed higher concentration levels. They are able to tune out distractions and remain focused in class which is a key skill to becoming a successful learner.

In our growing global economy, people who can converse in more than one language will have a head start. Fluency in a second language will be an asset to children when they grow up, especially those who decide to work in international business or politics.

20% of the US population is bilingual.

Ways To Introduce Your Child To A Second Language 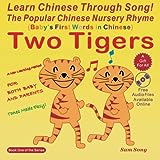 Young children love songs and rhymes and will enjoy learning the words to a song and singing along, no matter what language it is in.There are plenty of tapes, cds and dvds around that will help your child to pick up some words and phrases through action songs and nursery rhymes.

Nowadays, most young children will be familiar with a computer and may already have played games online. There are various resources online that will help you to introduce your little one to a second language and some of these are even free. One of these freebies is a new game called 'The Lingo Show', which has recently been introduced by the BBC on their Cbeebies website. Children are introduced to French, Spanish, Mandarin and many more languages with the help of a team of colourful bugs. My four year old daughter and I have been using this online game to learn some Mandarin and it really is a superb resource. Older children might enjoy learning through games that they can use on their handheld consoles, such as My Mandarin Coach and My Spanish Coach. Both of these games are very useful language learning tools and are reviewed very highly by customers on amazon.

Children learn effectively through words and pictures, so try using flash cards that have both the foreign word and the picture on them. If you don't speak the language then look for flash cards that come with an audio cd. You can pick these up online or make your own with card, a black marker pen and pictures cut out from magazines or catalogues. Parents can make up their own creative games to play with their children, using the flash cards as a learning tool. Take the lead from your child. My daughter loves animals and we often play an imaginative game of 'zoos' using the chinese flash cards and little animal figures. She will set up her animals around the room and label them with the relevant flash cards. This is a very simple game which my daughter loves playing because she devised it herself.

The Bilingual Edge: Why, When, and How to Teach Your Child a Second Language
Buy Now

So What Are You Waiting For?

Many parents worry that learning a second language will interfere with their child's ability to learn their native language well. However the opposite is true! Research shows that bilingual children actually have a better grasp of their native language than their monolingual peers. Even if you are not bilingual yourself, there are many resources out there that you can use to help and support your child in learning another language. You can even learn along with your child which will be an excellent way of spending quality time together as well as being a very positive learning experience for both of you.

They may not become fully bilingual, but the important foundations will be laid for later should they wish to continue language learning into adulthood. The younger your child is when introduced to a second language the better, as they are avid and eager learners in the early years. Take advantage of this ability your child has to learn effectively whilst they're young by introducing them to a second language now.

Other Hubs that You May Find Useful