Should You Raise your kids in the Country or the City, which is better?

The City Parent Handbook: The Complete Guide to the Ups and Downs and Ins and Outs of Raising Young Kids in the City
Buy Now

Raising children is a difficult process and fraught with many decisions. What form of discipline will you administer? What will you teach them about God and the universe? What world view will you pass on? Among all these decisions is the decision to raise your children in the country or suburbs verses in a metropolitan area. I was raised in a small town and I hated it. I hated the slow pace, the lack of opportunity, the lack of diversity and the lack of mobility. When I became a mother I made a conscious decision to raise my son in a decent sized city. It was one of the best decisions I ever made.

Having been raised in a small town I knew firsthand the pitfalls of the slower way of life. Many people think that they are choosing what is best for a child by raising them in the suburbs or a small town. I found it stifling intellectually. In order to counter the utter boredom my friends and I often found other more stimulating things to do. More often than not these activities were either immoral, illegal or just a nuisance to some unsuspecting victim. I have found that when exciting and/or stimulating activities are provided children will engage in those and often forsake the more unsavory activities.

Suburbs seldom offer the kinds of opportunities that a metropolis can provide. Should one want to engage in some kind of cultural affair it usually involves traveling great distances, possibly including overnight stays and a fair amount of expense. In the city kids and adults have opportunities to experience all kinds of cultural affairs as well as opportunities for work and play that many small towns and suburban areas simply cannot afford. One can visit a museum, the theater, a lecture or simply an independent film (which is often difficult to find in small towns). In addition, with a large population comes work opportunities that may help in later years. During my teen years the major employer was the nearest mall and that was about it. There were a few odd jobs you could do but nothing that would be a good start on a resume. In the city, however, many opportunities abound.

Moreover, the lack of diversity in most small to medium sized towns does not contribute to the overall welfare of a child. In the small town that I grew up in my family was the only Italian family. There was one Chinese family and one Mexican family. There were no Jewish families, no Black families and no Muslim families. When I was a child my parents used to fight like cats and dogs, you would think WW III was occurring. Then the next day all would be well. I didn't know until I was an adult and lived with another Italian woman that all Italians were like that. Whenever a crisis occurred she acted like it was the end of the world, then the next day it was like nothing ever happened (just like my parents). I finally realized it was a cultural thing and learned to take it in stride. Maybe if there had been even one other Italian family nearby when I was growing up I would have known but I didn't have that experience until later in life. I think sheltering a child from the realities of the world does not help the child. We are better people when we experiencing the realities of others. It helps us to understand ourselves and others. Cities provide diversity, seldom do small towns or even suburbs. 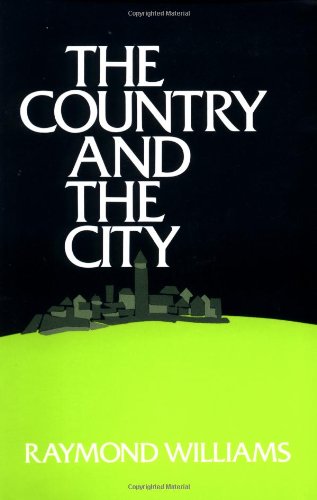 The Country and the City
Buy Now

Another huge consideration in the town I live in is that no one, well almost no one, owns a car. I live in Manhattan and very few people comparatively own cars. When it comes to teens, one thing most parents of teens in Manhattan don't have to worry about is whether their son or daughter will drink too much at a party and drive. That's very difficult to do when NO ONE HAS A CAR! They may get drunk or stoned at a party but they will either stumble home, take the subway home or cab it home. I never thought about this until I was talking to a friend of mine who raised her son in Manhattan.

Finally, mobility and a sense of community are enhanced in most metropolis'. In the small town I grew up in you couldn't even see a movie without getting there with a car. In the suburb I eventually moved to the nearest grocery store was 10 driving minutes away. Seldom did you see a neighbor or a friend. It was huge and serviced many suburbs. Many small towns and suburbs would be unmanageable without an automobile and a lot of time is spent commuting to and from on freeways before and after work. I found that when a community relies on automobiles it becomes increasingly alienated from itself. One goes from their home to their garage to the freeway to the employer's garage and back again to get home, seldom seeing a neighbor or a friend. In the city where I live I take the subway to work. I walk there in the morning and say hello to the doormen who stand like soldier/guards watching over the city. I see friends and neighbors on the buses and the subway. Sure it's crowded sometimes and sure there are some unsavory sorts but it usually ends well with maybe someone in the crowd making a funny comment that brings the entire commuting crowd together with a good laugh. In the end we all know that we are all people, different and alike, and it makes life colorful. I am sure that there are some that would argue differently but for my money I'll take Manhattan over any small town or suburb in the whole world!

Now, this is not to say that there aren't some very good things about living in the country. There are many things that are difficult to do in the city, like growing food for example. Having a garden and animals is a wonderful experience for children and doing that in a large city is very difficult if not impossible. Living off the land can teach young and old alike how to survive with just the bare necessities and this skill is lost in our culture today. So it's not as if I think that country life is without it's benefits. However, I think most people automatically think that children should be raised in the country, that the benefits far outweigh the detractors and that could not be farther from the truth.