Kids That Clean Up After Themselves

I am the mom to two amazing young people. I am the wife of a Charter Captain, a preschool teacher, freelance writer and Artist.

Does your childs room or play area look like the photo above?? Guess what it doesn't have to. You don't have to be frustrated and at your wits end by looking at this all day every day. It will take time, consistency and effort on your part to "train" your child to clean up after themselves. The younger they are when you start the better they get as they get older.

The biggest mistake I made was to follow behind my children and pick up after them, to avoid this mess. The day came that I was finally exhausted and just couldn't follow after them anymore and the mess began. I was overwhelmed looking at, yet I didn't want to clean it because I didn't make it. So my children were between 4 and 6 years old when I started training them to clean up after themselves. It was tough but I accomplished my goal and here's how I did it.

Delta Children Deluxe 9-Bin Toy Storage Organizer
I purchased a couple of these in the journey of training my children to clean up after themselves. They were an essential tool in meeting the goal, and they worked like charm. I recommend them to any parent that is trying to get their children to clean up their mess.
Buy Now

The "Training" or Teaching Process Begins

After being constantly overwhelmed by the mess, and realizing that yes kids do the dump and fill game as a normal part of growing and developing I just knew I had to train my kids to clean up after themselves. I am a daycare teacher currently with a room full of 1 year olds and I use the tips and methods listed below to teach them to clean up as well. All tips, methods, tricks and items that I have links to in this blog have all been 100% effective for me.

After researching and realizing that children will do what they call "dump and fill" as a normal part of development and growth, I knew I could make it a game. Many times children around the age of 10 to 12 months old will dump but they don't fill. SOOOOO when they dump a bucket, bin or basket of toys out they may not fill the basket, bin or bucket back up. To make this game work I have had to teach them to fill the container back up. So after taking their hands and physically putting them on the items and making them pick them up repeatedly and put them in the container we would celebrate after a few items they did on their own. The celebration turned it into a game.

In order to be effective with anything with children you have to be consistent and repetitious. Some times the repetitive movements and reminders can be annoying and make you feel like a broken record but they need it. I constantly reminded my children "when you are done playing with something put it away" or "we aren't dumping the bucket if you aren't filling it back up". My current group of one year olds have heard this so much in their first few weeks in my classroom that I barely have to say it anymore. 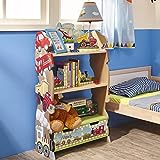 Fantasy Fields - Transportation Durable Wooden Kids Bookshelf, Hand Crafted Designs & Toy Storage Drawer, 3-Tier Shelf, Cars Trunk Train for Boy Bedroom
Toy shelf with storage at the bottom. I have two of these in my classroom, one is used with soft sided bins for their different toys and the other has a shelf full of their books, and shelf full of their big cars and trucks.
Buy Now

Once you have started training your child to pick up after themselves, you should implement a reward chart. This allows your child to visually strive for a goal, and see how close they are to their goal and getting the big reward. The more positive reinforcement they get they less verbal reminder they will need. Children do really well at young ages learning on a reward system. It will also teach them that they have to work for things (this lesson becomes important in the future.)

Show them that even mommy and daddy clean up after themselves. When you finish a drink or snack, put your dishes away and make sure to show them and talk them through what you are doing and why. When you get home and take your shoes off, show them to put them away rather than leave them in the middle of the floor. When you finish a book or magazine, put it where it belongs and show your children that even you put things away when you are finished with them and they should too.

Children don't want to be told to do something by someone who is doing the opposite, they want to learn and grow by your example. Think about it as an adult you don't want to have a boss tell you not to put your cup on the counter, when they do it. Children feel the same way.

5. Call or Text the Toy Fairy

Contacting that mysterious toy fairy, may help encourage them to pick up after themselves. Create a fantasy image in their heads of the toy fairy, and tell them that if they can't or won't help you pick up their mess that you aren't going to do it by yourself. Tell them you are going to call the toy fairy and tell her to come get the toys that they haven't put away. Make sure that they know only toys that are picked up and put away properly will be left behind.

Then when they go to bed or take a nap pick up those toys and put them in a box or hidden place so that they don't know where they are at. When they don't have the toys they want to play with or can't find that special doll remind them that had they picked it up the toy fairy wouldn't have taken them to a new place. As my children aged I went from the toy fairy to the simple fact that if they didn't pick up after themselves that I would throw their belongings away.

When the Day is Done

These are a few of my helpful tips to teaching or as I like to call it training your child(ren) to clean up after themselves. They have worked for me in the daycare centers and at home. Of course I do still have to remind some of them that they need to clean up after themselves, and sometimes I even will still get down and help them. After all they are children and need reminders and help from time to time. I hope you will find them as helpful as I have. 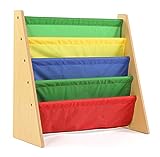 Tot Tutors WO593 Kids Book Rack Storage Bookshelf, 28.00 x 11.00 x 28.00, Natural/Primary
I absolutely love these book racks for kids books. I have one in my kids room, one in my living room and two of them in my classroom at work. They are amazing, you can store and organize all of their books so they can see the covers and know what is there. I would definitely recommend these to any parent.
Buy Now