In 1981 we almost lost our little son one afternoon. I had gone to get my husband where he taught school so he could have a bit of lunch. Our son and his little friend were in the back of our car (Volkswagen bus). I was making a U-turn and the children were jumping around, when all of a sudden I felt a bump and through my rear-view mirror I saw that the back doors of the van were wide open. I turned around and was horrified to see that the two children were not there. I stopped the car, jumped out and looked for the children. One was lying in the gutter near the sidewalk and my son was right smack in the middle of the road, just lying there. Luckily we lived in a small town in the desert and traffic was minimal, even at lunchtime. I realize how much worse this could have ended. 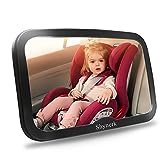 The little girl had a few bruises and cuts, but my son did not respond very well. We took him to the doctors and he was diagnosed with a concussion. We stayed up watching him most of the night and checking his eyes with a flashlight. This same son has fallen on that part of his head so many times from other mishaps that his hair refuses to grow there.

When I think back to those days, we had no regulations from the state or federal government regarding using car restraints. We did not have seat belts or car seats for children then, but when I think of what could have happened to those children, I am glad that there are restraint laws now.

Being a grandmother, I see how just a simple trip to the store takes almost twice as long than it used to. By the time you get the kids all bundled up, in their car seats and restraints, put your own seat belt on you are exhausted before even backing out of the driveway. Sometimes we take shortcuts and do not buckle up everyone properly before we leave. These laws are for our safety and the well being of our children.

When my daughter was a baby, we had a flimsy little carrier for her. There were no rules about putting the baby in the back seat rather than the front. I am sure the angels were exhausted watching over all our babies back in the 70s. It has been shown that age appropriate child restraints do save the lives of children today.