"You're not listening!" my three-year old son shouted at me with a mixture of frustration and irritation.

"Yes, I am!" I responded with the same emotional undertones.

I cannot remember exactly what his request or demand was. I only know that I said "no" to it. My son's response was the unexpected aforementioned, "You're not listening!"

I was confused. I even told him so. "I am listening," I explained again. "You want to do X. But, I said, 'no.' I do not think that you are listening."

As surprised as I was by his initial response, I was exponentially more astounded by the fervor in his insistence that I was not listening. My son comprehends well; I could not understand his resistance to my explanation.

Finally, it hit me. I had been thinking about the word "listening" from my definition: hearing and understanding what another person said. When I listen to you, I hear the words that come out of your mouth, I process them and I comprehend them. From my perspective -- and from my context of what "listening" means -- I was doing just that with my son.

I realized, however, that "listening" means something much different to my son (and likely to all children!) from what it means to me. Whenever I -- or his mother, or his grandparents, or his teachers, or his camp counselors, or just about anyone else with authority -- would him or tell him to do something and when he would do so, the response would almost always be the same: "Good listening." From his three-year old perspective, "listening" -- or, more accurately, "good listening" -- meant doing something that you were asked or told to do!

Please put your toys away. [He does so.] Good listening!

Thus, "listening" for him meant doing what he was asked or expected to do. Returning to our argument with which this Hub post began, it is clear that, from his perspective, I was not listening: he made a request, and I would not acquiesce. In other words, I was not doing as I was asked: I was not "listening"! Once I appreciated the distinction that we had in our contextualized definition of the same word, I asked him if he thought that "listening" meant "doing what you are asked or told to do." Relieved, he replied with an exasperated, "Yes!!"

Having cleared up the confusion with my son (though still not having agreed to his request), I decided to change my language. When he does what he is asked or told, instead of complimenting him with, "Good listening," I compliment him with, "Good following instructions." He now knows the difference: one can listen without necessitating compliance.

Of course, it's a whole different story if he adds, "Please..." 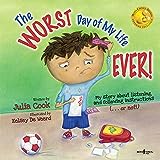 The Worst Day of My Life Ever!: My Story About Listening and Following Instructions ... or Not!
Buy Now