My Review of the Bentgo Kids Tray Bento Box

Megan is a writer and mom of two. She enjoys cooking, running, and gardening.

In the United States, a greater number of elementary students eat the school lunch vs. a home packed lunch. There has been a bigger push for school lunches to have fruits and veggies, but many still serve larger than appropriate servings sizes of high fat and high starch foods like cheeseburgers, chicken nuggets, and hot dogs. Also, kids are not given that much time to eat lunch in the U.S.—it is estimated that many American school children have less than 8 minutes to actually eat their lunch when you account for time spent entering the lunch room and cleaning up.

Having worked in an elementary school in the U.S., and having eaten the school lunches, I have drawn several of my own conclusions about them. Our school’s lunches come in “packs”—a hot pack with the hot main course, and a cold pack with foods like buns, salads, or fruit. If I eat a school lunch every day of the month, and finish everything in both packs, I gain weight. After observing many kids in the lunchroom, I’ve seen that many of them don’t finish the foods, and the foods they do go for first are the desserts or just generally less healthy items. Not all of the school lunches are bad, but I’ve decided that I need to put in the extra effort to pack a lunch for my child that she likes, that is nutritious, and that is fun.

If you’re curious to see how American school lunches compare to many others around the world, this article from Business Insider features school lunches from many different places.

Bento boxes originate from 5th century Japan, where they were originally used by farmers or warriors to carry a meal with them. It’s design, with small compartments for different types of foods, was inspired by the boxes farmers used to carry seeds. The bento box spread from Japan to China and surrounding areas. Originally used by those in rural areas for convenience of those who would be away from home during the day, it rose in popularity among higher classes in the beginning of the 20th century. Bento boxes first came to America when Japanese immigrants arrived after World War II and began working on sugar plantations.

In Japan, where the concept of bento originates, bento boxes and their contents have become an indication of social status among children. Many parents spend a lot of time each day crafting their children’s lunch for the following day. Many bento boxes feature foods crafted into popular characters. It is not uncommon to see Pikachu-shaped rice balls or jelly sandwiches carved into Hello Kitty’s likeness.

Bento boxes may be great for inspiring food art, but they are also great for inspiring balanced meals with appropriate portion sizes. They typically have 4 or 5 containers of varying sizes, none of which are larger than the size of a fist or about a half of a cup. Even if you tried, you can’t fit an oversized portion into a bento box compartment! Many bento box vendors point to this fact when advertising their product. The idea is to put a different food in each container, resulting in a balanced and nutritious meal.

Benefits of Using a Bento Box

These compact, reusable boxes result in healthier lunches for kids, and they are also much better for the environment than materials traditionally used when packing kids’ lunches. They are reusable. They are also for the most part spill-proof, so you can pack virtually any food, dressing, etc. Bento boxes also encourage kids to try more foods than if they were all on one plate, or in separate containers. They are more likely to try something from each small compartment. Most are also dishwasher safe, adding to their convenience. Many, including the Bentgo Kids Tray, are BPA free, so you can be assured that no added toxins are leeching into your child’s foods.

My Review of the Bentgo Kids Tray 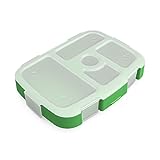 ​​Bentgo® Kids Tray with Transparent Cover - Reusable, BPA-Free, 5-Compartment Meal Prep Container with Built-In Portion Control for Healthy, At-Home Meals & On-the-Go Lunches (Green)
This kid’s bento box has been great for encouraging my kid to eat a more varied lunch and to avoid bringing pre-packaged junk food to school. It is somehow just more fun to eat fruits and vegetables from these cute little compartments! We usually pack a main course like a sandwich or rice/eggs in the big compartment, then put a different fruit, veggie, cracker, or dip in the other smaller compartments. I tell my daughter before school that she should try at least something from each compartment, and she usually does just that. The side snap closures were a little difficult at first for my five-year-old to open and shut by herself. We did have a spaghetti sauce leak one time when she didn’t close one of the snaps quite right. After the first few days, though, she has had no trouble at all with opening and closing the box. One thing I would change about this box is to make the biggest compartment just a little bit bigger so that a sandwich, at least without crust, could fit in without being cut up into pieces. This is also a pro, however—it has encouraged us to be more creative and use cute cookie cutters to cut up sandwiches so they will fit. Overall, I would highly recommend the Bentgo box. It has helped me to pack healthier, more varied lunches for my daughter, since I feel like I need to fill each little compartment with a different food item. It has saved us money since we are not buying disposable plastic snack bags anymore. It makes lunch fun! I’ve been inspired by Pinterest and Instagram to experiment with cookie cutters and to more artfully arrange lunches The box has also been quite popular among my daughter’s friends at school—they have asked her where she got hers and said they wanted one too!
Buy Now

Bento boxes help us get away from the run-of-the-mill sandwiches and prepackaged junk foods (see my post about high fructose corn syrup), and move toward healthy, whole foods. It also makes us think twice about portion sizes: a bag of chips or a whole sandwich won’t even fit in one of the little compartments. Below are some ideas, based on this particular box, of what you can pack:

Brown rice with a sliced hardboiled egg on top

Fruit snacks (out of package)

If you have been considering starting to send your child to school with a cold lunch to have them choose healthier options, or if you already do that and want a more convenient reusable container, this bento box is a great choice. You may even want to get one for yourself as well! Bento boxes are great for both adults and kids to encourage healthier eating, portion control, and environmentally friendly meals on the go.

Would you use a bento box for yourself or your child?